Despite their rhetoric, Republicans in Congress have shown through their own inaction that they don't really support the President's border wall. 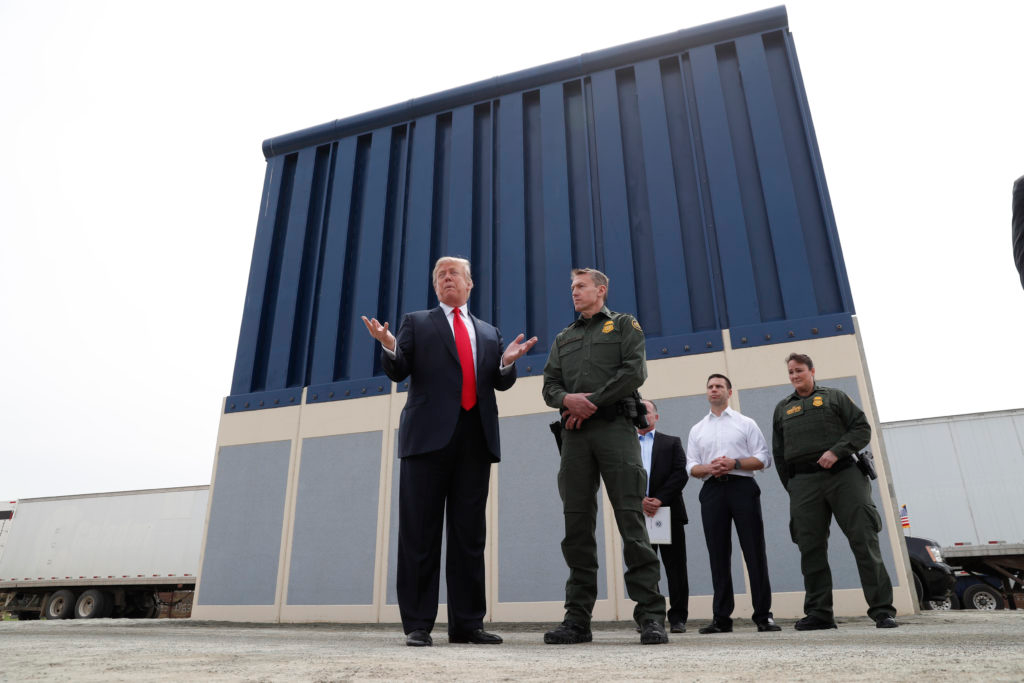 We’re now twenty-seven days into a shutdown that revolves not around arguments over the level of government spending. as previous shutdown debates have, but on the seemingly minor issue of providing $5.7 billion for partial funding of the President’s border wall. As we go on, the President and Republicans continue to try to blame Democrats for refusing to consider any money for the wall even as polling clearly indicates that most Americans are blaming the President for the shutdown and do not support the construction of the wall in any case. Realistically, this is naive considering the fact that Democrats have made their opposition to the wall clear from the beginning and have indicated they will not support any deal that includes wall funding, which is, of course, the reason that Trump and the GOP are trying to blame Democrats for the shutdown.

As Noah Rothman notes in a piece posted at NBC, though, Republicans didn’t exactly do anything to support the construction of the wall while they had control of the House, Senate, and White House:

Less than a month after Trump took the oath of office, Republicans were already backing away from the prospect of a border wall — because of the price tag and lack of spending offsets, to which many Republican lawmakers objected, but also because there was disagreement over the essential utility of a physical partition. “I don’t think we’re just going to be able to solve border security with a physical barrier because people can come under, around it, and through it,” Texas Sen. John Cornyn told reporters in February 2017. “If you only build a wall, only a ‘wall’ without using technology, individuals, drones, observations, etc., you’re not going to secure the border,” the late Sen. John McCain agreed.

Some Republicans had not warmed to the venture a month later, as a standoff over wall appropriations in a bill to fund the government loomed. “The border wall is probably not a smart investment,” Sen. Lindsey Graham said in early 2017. Though he supported funding a wall as part of a legislative package that would also provide young undocumented immigrants with a pathway to legal status, Graham and other Republicans were prioritizing increased military spending over border security.

The White House’s March 2017 request for $7.5 billion in spending for border security initiatives, including $4 billion to be allocated to wall-related planning, construction, and legal costs related to the reclamation of private land, generated little support among Republicans. In late April 2017, the Wall Street Journal surveyed border state lawmakers from both parties and found that “not a single member of the House or Senate representing the region expressed support for the funding request.” They noted, however, that Sen. Ted Cruz “backs the overall idea of a wall,” but would not commit to support Trump’s specific request. A few months later, USA Today Network polled all 534 lawmakers in both the House and the Senate and found that just 69 of 292 Republicans — one-quarter of the GOP conference — supported Trump’s request for $1.6 billion to begin wall construction.

Republicans spent the summer of Trump’s first year in office avoiding a vote on funding for the wall. By Labor Day, the GOP’s strategy to keep the government open and pass tax reform legislation meant pushing the border security debate into the next year. “We have to deal with Harvey, we have the debt ceiling, we have a continuing resolution, which will be just about a three-month continuing resolution,” then-Majority Leader Kevin McCarthy said in September 2017. “So you will deal with the wall a little later in the year.”

By the fall of last year, with elections looming, it was clear that the GOP would not fund Trump’s wall, but Trump seemed to be the last to know. “Republican leaders are more focused on urging Trump to delay a fight for the wall than on fighting for it themselves,” the Washington Post reported in September 2018. “Congress is working to pass a short-term spending bill that would avert a government shutdown Oct. 1 and punt a showdown over wall funding into December, after the November midterms.” This effort by Republicans to avoid a controversial vote on a contentious campaign promise was an attempt to avoid making a bad political environment worse, but Trump insisted on framing the election as a referendum on his policies and, specifically, the border wall. Democrats went on to have their best midterm election showing since the year Richard Nixon resigned.

For two years, Republicans had many opportunities to fund Trump’s wall both in part or in whole and they declined on every occasion. In failing to approve the wall, Congressional Republicans rendered a negative verdict on Trump’s signature policy proposal. The GOP was right to be skeptical of what a wall could accomplish. But they should not be allowed to pretend that they have always been steadfast supporters of this project now that a Democratic majority in the House provides them with political cover.

Rothman is, of course, entirely correct. Republicans controlled the House, the Senate, and the White House for nearly two years from the date of President Trump’s Inauguration and yet they did nothing to even attempt to fund the wall. Indeed, a review of the budget process during the budget debates both in 2017 and last year indicate that, while Republicans on Capitol Hill paid lip service to the idea of funding for the wall, they failed to include any such funding in the budget bills that were voted on by either the House and the Senate, much to the chagrin of the President, who generally blamed Democrats for the fact that he wasn’t getting funding for his wall and simultaneously threatening to shut the government down if he didn’t get funding. Until this past December, though, the President didn’t follow through on that threat. Instead, he appeared content with making baseless claims that the wall was being built when it, in fact, was not, and in using the issue to bash Democrats at his campaign-style rallies that he held on repeated occasions in 2017 and 2018.

Republicans might respond to this criticism by stating that they could not get a budget approved in the Senate without Democratic support and that Democrats were adamant in their opposition to the wall. While it may be true that, under normal Senate rules, Republicans would need sixty votes to get the budget passed, which would have meant the support of at least eight (later nine after the election of Doug Jones) Democratic Senators) Democrats for a cloture vote, that doesn’t explain why they failed to try to use the reconciliation process to pass a budget that included government funding. Additionally, as I have stated before, it’s simply not true to say that Democrats have never been willing to fund the wall. Last year, Senate Minority Leader appeared to have worked out a deal with the President that would have averted the first shutdown of 2018 with a deal that kept the government open, provided for $25 billion for the President’s wall, and protected the beneficiaries of the Deferred Action for Childhood Arrivals (DACA) program. Within hours, though, the White House had rescinded the deal, and that led to the aforementioned shutdown. As Senate Majority Leader Chuck Schumer put it at the time, negotiating with this President is like negotiating with Jello. In other words, President Trump could have had five times the amount of funding for his wall that he’s asking for now, and he walked away from it. Given that, it seems clear that Republican committment to the border wall is really nothing but empty words. It’s no wonder then that Democrats are calling their bluff now that they are in power in the House.