A new CNN/ORC International poll shows Republicans taking a slight lead over Democrats in the Generic Congressional Ballot, which at least to some extent can be a predictor about how the midterm elections will go:

Washington (CNN) - Democrats have lost their advantage and Republicans now have a slight edge in the battle for control of Congress, according to a new national poll.

A CNN/ORC International survey released Thursday also indicates that President Barack Obama may be dragging down Democratic congressional candidates, and that the 2014 midterm elections are shaping up to be a low-turnout event, with only three in 10 registered voters extremely or very enthusiastic about voting next year.

Two months ago, Democrats held a 50%-42% advantage among registered voters in a generic ballot, which asked respondents to choose between a Democrat or Republican in their congressional district without identifying the candidates. That result came after congressional Republicans appeared to overplay their hand in the bitter fight over the federal government shutdown and the debt ceiling.

But the Democratic lead evaporated, and a CNN poll a month ago indicated the GOP holding a 49%-47% lead. The new survey, conducted in mid-December, indicates Republicans with a 49%-44% edge over the Democrats.

The 13-point swing over the past two months follows a political uproar over Obamacare, which included the botched rollout of HealthCare.gov and controversy over the possiblity of insurance policy cancelations due primarily to the new health law.

Republicans have a 17-seat advantage in the House and Democrats hold a 55-45 majority in the Senate.

Other recent polls taken over roughly the past month have shown the ballot to be slightly tighter than the CNN/ORC poll, such as the such as the Rasmussen poll which shows a 3 point GOP lead, two polls (Fox News and McClatchy) show a tie, and three (ABC/Washington Post, Public Policy Polling, and Quinnipiac show a slight Democratic lead ranging from two to four points. All of this leaves us with a RealClearPolitics average of 43.4 for the GOP and 43.1 for the Democrats. Generally, anything within the 5 to -5 point range is considered to be relatively positive news for the incumbent party in control of one or both Houses of Congress. Looking at the chart, though, it’s clear that we’ve seen a definite swing toward the GOP over the past three months from the lows that it was suffering in the wake of the Federal Government shutdown: 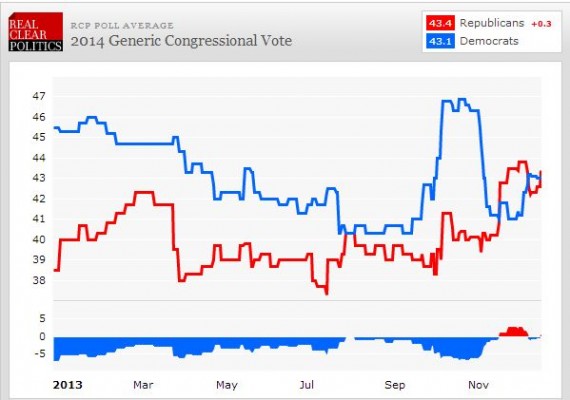 Earlier this month, Charlie Cook had this to say about the GOP’s rise in the Generic Ballot:

Sure enough, the Democratic numbers in the generic ballot began to pull dramatically ahead, resembling a steep ascent up the side of a mountain, ending about 7 points ahead of Republicans, 45 percent to 38 percent—an advantage that, were it to last until the election, would give Democrats a chance to recapture the House.

Then, in mid-October, the focus shifted from the government-shutdown fiasco to a different debacle, this time a Democratic disaster: the botched launch of the Obamacare website and subsequent implementation problems of the health care law, including termination notices going out to many people who had insurance coverage. The Democratic numbers from the generic-ballot test dropped from 45 percent to 37 percent, and Republicans moved up to 40 percent. This 10-point net shift from a Democratic advantage of 7 points to a GOP edge of 3 points in just over a month is breathtaking, perhaps an unprecedented swing in such a short period. Occurring around Election Day, such a shift would probably amount to the difference between Democrats picking up at least 10 House seats, possibly even the 17 needed for a majority, and instead losing a half-dozen or so seats.

The numbers have tightened since Cook wrote that since then, of course, and it’s worth noting that it’s still pretty far out for the Generic Ballot to necessarily be a good indicator of how elections that won’t be held for nearly ten months will turn out. It was until a few months before the 2010 elections, for example, that we first started getting hints of a big surge toward the GOP, for example. Nonetheless, these numbers should put to rest the idea that the aftermath of the Government shutdown was going to destroy the GOP come 2014. Of course, it also suggests that we’re unlikely to see Obamacare destroy the Democrats either. Instead, the more likely outcome is a more or less stable outcome in the House, with Republicans likely picking back up many of the Districts they lost in 2012 but not making any more significant gains simply because the number of actual competitive districts remains at an historic low. The Senate is potentially a different story, but even if the GOP makes gains there, the best I see them doing would give them a 52-48 majority, hardly something on the level of what we saw from the Democrats in 2008 when they ended up with one of the largest Senate majorities we’ve seen in quite some time. Obviously, these projections can and probably will change over the coming ten months. Nonetheless, as things stand right now, 2014 doesn’t look like it’s going to be a mostly stable election, especially in the House.

Congressional Republicans Wake Up To Post-Shutdown Poll Headaches, Will It Matter In 2014?