Rick Perry continues to hint at another Presidential run. 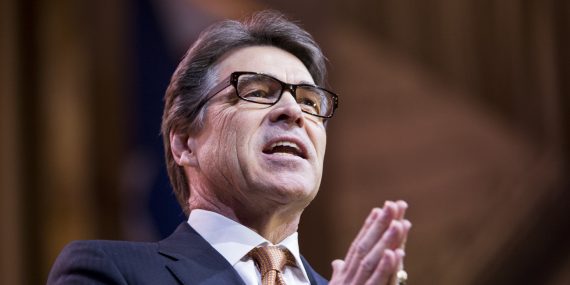 Rick Perry, who is nearly the end of his final term as Governor of Texas, is starting to talk about running for President in 2016:

WASHINGTON — Gov. Rick Perry of Texas on Sunday sent some of his clearest signals of interest in a 2016 presidential bid, joking wryly about his “botched” run in 2012 but then adding, “I think America is a place that believes in second chances.”

Appearing on the NBC program “Meet the Press,” Mr. Perry defended his state’s use of the death penalty as “appropriate and humane,” even after the bungled execution in Oklahoma last week. He called for a greater national focus on job creation and the underemployed, particularly women. And he criticized President Obama for what he called a “one size fits all” approach to solving problems perhaps best left to the states.

But as Mr. Perry begins traveling across the country and abroad to extol the vigorous Texas economy and raise his national profile, he chose not to deflect discussions about his presidential aspirations.

Asked about what many saw as his “botched” run in 2012 — when he was tripped up in part by an agonizing memory lapse during a nationally televised debate — Mr. Perry chuckled and said, “I would tend to agree with them on the botched effort side of it.”

But he went on to talk about “second chances,” and added, “I think that we see more character out of an individual by how do you perform after you fail and you go forward.”

The governor said that in his travels across the country he would talk about “how do we make America more competitive” and “how you get Americans back to work” — themes that clearly extend beyond the borders of Texas.

The speculation about Perry running again for President has been out there ever since he announced that he wouldn’t be running for Governor again this year. On some level I suppose, it’s inevitable that this would happen. Notwithstanding what happened during the 2012 campaign, Perry is the longest-serving sitting Governor in the country right now, and he’s the Governor of the second largest state in the country by both population and area. More importantly, the Texas economy has resisted the sluggish economy that has impacted the rest of the country since the end of the Great Recession and, even though much of that is due to factors beyond Perry’s direct control he gets the credit for it as much as President Obama gets credit, or blame as the case may be, for the state of the American economy. Outside one or two issues, Perry is a solid conservative who has made an effort to forge ties to the Tea Party notwithstanding the fact that he is a career politician who has held elective office in Texas, continuously, since 1985. In other words, at least on paper, Rick Perry is as strong a candidate for the Republican nomination in 2016 as he was when he first entered the race in 2012 and, as I’ve noted when I’ve written about this before (here and here),

However, it strikes me that Perry faces several obstacles if he’s going to attempt a Presidential comeback.

While he is a conservative on nearly every issue, for example, Perry deviates from conservative orthodoxy when it comes to immigration and how we ought to deal with the undocumented immigrants who have established lives in this country. During the 2012 campaign, for example, one of the first issues to get Perry in trouble with the hardcore base and conservative pundits was his support for in-state tuition for the children of undocumented immigrants. While Perry pointed out, correctly, that this was an idea that had broad bipartisan support in Texas, and which passed the overwhelmingly Republican state legislature by a wide margin, it was an issue that he was attacked on by pretty much every one of the other candidates running. Perry made the matter worse when he called the people who disagreed with him on this issue, and on the issue of deportation, heartless. If anything, the hardcore base position on immigration has become even more rigid in the intervening years, and since it’s unlikely we’ll see immigration reform prior to the 2016 election, this is going to be a problem that Perry will have to deal with coming out of the gate.

Perry’s second problem lies in the fact that there have been significant changes in the Republican Party since he ran for President. In some ways, the party has become more conservative on some issues, while also shifting positions at least rhetorically on foreign policy and civil liberties issues. If he runs for President in 2016, Perry could find himself competing for attention from Tea Party voters with candidates such as Rand Paul and Ted Cruz while also facing challenges from other equally qualified Governors such as Scott Walker, John Kaisch, Mike Pence, Jeb Bush, and Chris Christie. Exactly where he fits into that kind of dynamic is not entirely clear.

Finally, the obvious problem that Perry would face if he runs again, which he basically acknowledged in his interview on NBC yesterday, is overcoming the impression that was left in the wake of his 2012 campaign. Whether it was his generally weak performances in the debate, capped off most famously by the “Oops moment,” or his many gaffes on the campaign trial, Perry’s 2012 campaign was in many ways a comedy of errors made all the more pathetic by the fact that, within a month after he had entered the race, he had raised incredible amounts of money that made it seem like he could be the candidate that actually gave Mitt Romney a run for his money. All those moments are available on YouTube and will inevitably be replayed ad nauseum if he runs for office again. Pundits and journalists, along with opponents, will be watching and waiting for other such moments on the campaign trail, and a repeat of what happened in 2012 would bring any Perry comeback to a swift and certain end. We’ve seen politicians bounce back from bad campaigns before, but in an era where every gaffe is available at a moments notice it’s not clear this is possible any more.

As I’ve noted before, Perry will have the better part of a year after he leaves office at the end of the year to try to rebuild his national reputation. Perhaps he can do it and become a 2016 frontrunner, but I wouldn’t bet any money on it.