Former SecDef Robert Gates is among those who believes that the Iraq War unduly diverted attention from fighting the War On Terror. 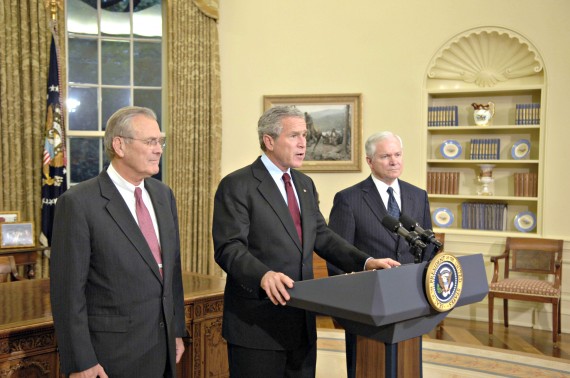 While it is the comments he made about President Obama Vice-President Biden, and former Secretary of State Hillary Clinton that are getting the attention right now, one portion of former Secretary of Defense Robert Gates’s new book that is also quite interesting are his comments about the Bush Administration’s policies after September 11th and their relationship to the Iraq War:

Most of the fallout from Robert Gates’s astonishingly frank and often bitter memoir has landed squarely on the stalwarts of the Obama administration, including the president himself, Vice President Joe Biden, and former Secretary of State Hillary Clinton. But, based on the excerpts released so far, the former Defense secretary appears to reserve his fiercest criticism for Obama’s predecessor, George W. Bush, even though it is fairly implicit.

In one devastating passage of Duty: Memoirs of a Secretary at War, Gates writes that the optional war that Bush chose to launch in 2003—the invasion of Iraq—seriously undermined the conduct of the necessary war in Afghanistan, the conclusion of which still bedevils U.S. foreign policy today:

President Bush always detested the notion, but our later challenges in Afghanistan—especially the return of the Taliban in force by the time I reported for duty—were, I believe, significantly compounded by the invasion of Iraq. Resources and senior-level attention were diverted from Afghanistan. U.S. goals in Afghanistan—a properly sized, competent Afghan national army and police, a working democracy with at least a minimally effective and less corrupt central government—were embarrassingly ambitious and historically naive compared with the meager human and financial resources committed to the task, at least before 2009.

In a single paragraph Gates effectively sums up and validates the chief criticisms of the Bush administration’s conduct of the so-called war on terror: 1) that Iraq was a serious diversion from the ongoing stabilization of Afghanistan, where the actual culprits of 9/11 were hiding out; and 2) that the effort to destroy al-Qaida and round up Osama bin Laden and his leadership team was seriously underfunded and suffered from far too little attention, especially by the time the Taliban began to regroup in a major way in the mid-2000s.

None of this is new criticism, of course, as Conor Friedersdorf notes, it’s a criticism that President Obama made throughout his Presidential campaign, and one that other critics of the Bush Administration made many times during the years between 2003 and 2009. The criticism, of course, isn’t that we should have been sending all of the troops that we did to Iraq to Afghanistan. Indeed, these were two very different wars with two very different strategies and men and material requirements. Instead, the allegation has been that the Bush Administration and Pentagon, beginning in 2002 and continuing through 2003 and beyond as the war itself was launched and then the insurgency became the central focus of U.S. military and political planning and attention, the War in Afghanistan and the fight against al Qaeda took a back seat, something which, among other things, allowed the top leadership of al Qaeda and many of its members to slip out of the hands of the U.S. military and its allies.

To be fair, of course, Gates was not a member of the Bush Administration during the early years of the Iraq War. Gates first came on the scene when President Bush named him to be Secretary of Defense in the wake of the resignation of Donald Rumsfeld after the 2006 midterm elections, something which was widely seen as Rumsfeld accepting primary responsibility for the faulty conduct on the war and things such as the horrid scandal at the Abu Ghraib prison. However he was directly on the scene when it came to both evaluating the situation in post-Rumsfeld Iraq, the so-called Iraq Surge, and figuring out what the heck had been going on in Afghanistan over the previous three years. So, his opinion is as valid and as well-informed as anyone else’s who had been on the scene the entire time. More importantly, based on what we know happened in both countries in the period between 2003 and 2006 and beyond, it seems like the conclusion that Gates reached based on the information available to him is so blindingly obviously true that to deny it is just intellectually dishonest. Most, importantly, though, as Friedersdorf states”

The Iraq War undermined the most significant anti-terrorism campaign that the United States launched after 9/11, and made us less safe as a country. The GOP and the country would both be better off if anyone who still insists that invading Iraq was prudent never again gets to shape U.S. foreign policy.

That should just be a baseline.