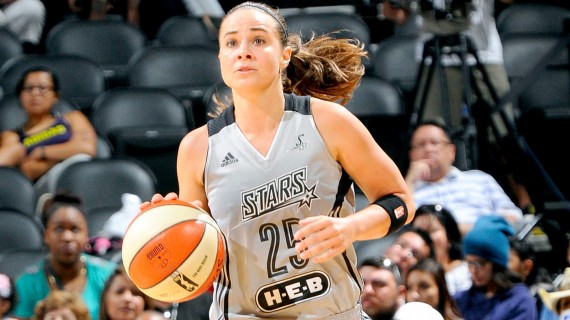 Yesterday, the San Antonio Spurs became the first NBA team to hire a woman as a full-time assistant coach:

On Tuesday, the San Antonio Spurs announced the hire of Becky Hammon as an assistant coach, making her the NBA’s first full-time female coach. The 37-year-old will become the second woman to serve on the league’s coaching staff, following Lisa Boyer, who was a part-time assistant coach for the Cleveland Cavaliers in the 2001 season. Hammon’s role is a paid position, while Boyer served as an unpaid volunteer for the Cavaliers.

“It’s a tremendous honor,” said Hammon at a news conference from the Spurs facility. “But I think the bigger point is I’m getting hired because I’m capable because of my basketball IQ and stuff that they’ve seen in me personally.”

Hammon, who played for the San Antonio Silver Stars franchise, was named in July 2011 as one of the WNBA’s top 15 players in league history, and she is a six-time All-Star player in the league. Hammon is the Stars’ all-time leader in assists with 1,112, and ranks second in points for the league with 3,442. She also played for Russia in the 2008 and 2012 Olympics. Hammon announced on July 23 that she would retire this month from the WNBA after 16 seasons.

She worked with Spurs in an unofficial role this past year, coaching players and leading team meetings and tape review sessions.

“Having observed her working with our team this past season, I’m confident her basketball IQ, work ethic and interpersonal skills will be a great benefit to the Spurs,” said Spurs Head Coach Gregg Popovich.

The Spurs’ announcement is not the only high-profile female hire the NBA has made this summer. Just last week, Michele Roberts became the National Basketball Players Association’s first female executive director. “We’re thrilled the players selected Michele Roberts as #NBPA Executive Director! Congrats to our players & exec comm for a historic choice,” the association tweeted.

The Los Angeles Clippers also named its video coordinator Natalie Nakase as an assistant coach for the team’s summer league games in Las Vegas. Speaking from the bench, where she was the only female assistant coach, Nakase told msnbc that “it’s definitely an honor that people are noticing [Hammon], or even announcing it … that [she] could be the league’s first female coach.”

Nakase added, “My mom told me I should be a Clippers’ spirit girl, but, for me, it was always all just about basketball.”

She referenced Nancy Lieberman when asked if she knew of another woman striving to coach in the NBA. In 2010, Lieberman became the first female professional head coach of a men’s sport. She coaches the Texas Legends, the NBA Development League affiliate of the Dallas Mavericks.

Hammon is not the first woman to have a coaching role with an NBA team, but she is the first to be an official member of the coaching staff.  More than ten years ago, during the 2001 season, Lisa Boyer had an informal unpaid role with the Cleveland Cavaliers. That makes Hammon the first real female coach in the league. Whether it leads to a female head coach some day remains to be seen, but there’s no reason to think that it couldn’t happen. There’s no reason, for example, that someone on the level of a Pat Summitt, who led the Tennessse Lady Vols from 1974 to 2012, and won eight NCAA championships and sixteen SEC championships, could not succeed as a coach in the NBA.