Sarah Palin And The 2010 Elections

Sarah Palin had a very good track record in her primary season endorsements, but it's not at all clear that she will have much of an impact on the 2010 General Election. 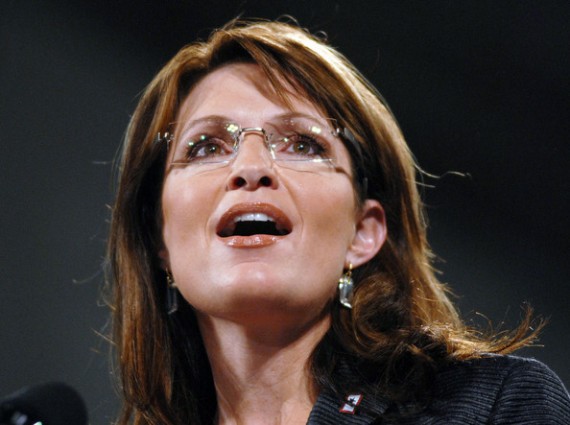 During the primary season, twenty-five of thirty-six Republicans that Sarah Palin endorsed ended up winning their primaries. While many of these endorsements were fairly conventional picks like Terry Brandstad in Iowa and Rick Perry in Texas, Palin also managed to pull off a few surprises like Joe Miller and, of course Christine O’Donnell. Now that the General Election campaign has started in earnest, Palin seems ready to hit the road in earnest once again; today, for example, she’s headlining a fundraiser in Kentucky for Rand Paul. However, it’s unclear that she will be as effective in November as she was during the Primary season:

Almost half of American voters continue to view Sarah Palin unfavorably and most would not heed her political endorsements, a new CBS News/ New York Times poll shows.

The former vice presidential candidate’s favorability rating has declined slightly since August, with 46 percent of surveyed voters viewing her unfavorably and 21 percent viewing her favorably. Thirty-two percent of voters said they were either undecided or hadn’t heard enough to have an opinion, according to the poll, conducted Sept. 10-14. Last month, 23 percent of voters viewed Palin favorably, whereas 40 percent viewed her unfavorably and 35 percent didn’t know.

Democrats (68 percent) and Independents (a net negative of 45 percent) said they had a negative opinion of Palin.

In addition, it is apparent that rather than being a surrogate for the GOP as a whole, Palin really only represents a segment of the party:

New polling from the Washington Post/ABC News suggests that Palin’s effectiveness as a surrogate is limited to a relatively narrow swath of voters, meaning that she may be out on the campaign trail less this fall for Republicans than she was during primary season.

Not surprisingly, self-identified Republicans are the most likely to say a Palin campaign appearance would improve their chances of voting for a candidate (39 percent) and Democrats are the least likely (nine percent).

But go even deeper into the numbers and an interesting split is revealed among self-identified conservatives regarding their views of Palin.

Among the “very conservative,” the numbers were far more favorable for Palin: 39 percent said a Palin campaign appearance would improve the chances they would vote for a specific candidate while just 12 percent said it would make them more likely to oppose the candidate.

What those numbers suggest is what smart political observers have long suspected: Palin’s support is deep but not terribly wide. Palin herself seemed to acknowledge that fact in an interview with Fox News Channel on Wednesday. Asked whether she would be campaigning for O’Donnell in Democratic-friendly Delaware in the fall, Palin replied: “I’ll do whatever I can. I want to help, though, and not hurt. And, you know, sometimes it’s a double edged sword there if my name is connected to anybody.”

Palin is still likely to do pretty well in November just because this is a Republican year and most of the candidates she’s endorsed are in states where Republicans are likely to do very well. The questionable picks — Nevada, and, of course, Delaware — are a different story. However, as a I noted several months ago, Palin has done a very good job of make picks that create a situation where there are people who are politically indebted to her in at least some respect all over the country:

Whatever her plans, Palin is racking up an impressive list of endorsements of candidates who may arguably consider themselves indebted to her two years from now.In fact, putting her recent endorsements (Rand Paul, Haley, Fiorna, Branstad) up against those of President Obama (Arlen Specter), she seems to be doing a better job of getting candidates elected than the President of the United States.

Of course, despite her success as a kingmaker, it’s not at all clear that Palin will ever be able to grab the brass ring: 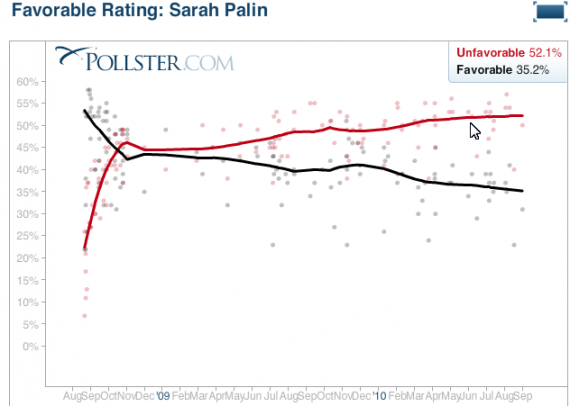 With numbers like that, the prospects for a successful run for the White House seems dim indeed.