How would the addition of Susan Rice and Samantha Power to the President's foreign policy team affect policy toward Syria's civil war? 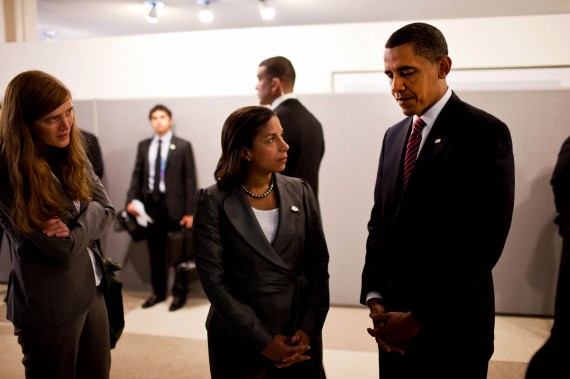 With the President making the formal announcement this afternoon that he has selected U.N. Ambassador Susan Rice to be his new National Security Adviser and longtime adviser Samantha Power to be replace Rice at the United Nations, speculation has turned to what impact these moves are likely to have on the direction of foreign policy in President Obama’s final term. Specifically, given the fact that both Rice and Power have a reputation as advocating a foreign policy of intervention to prevent or stop human rights violations, and that they were both heavily involved in advocating for intervention in Libya in 2011, their selection raises the question of what influence Rice and Power might have on U.S. policy toward the civil war in Syria. To date, President Obama has displayed a decidedly cautious approach toward the idea of even indirect intervention in the form of arming the rebels, and it seems rather clear that there has been very little support inside the Administration for such intervention notwithstanding the fact that the President has at various times drawn “red lines” for the Assad regime. Now, with two advocates of what has been referred to as the “Responsibility To Protect” Doctrine, one wonders if there’s a possibility that a policy shift may be at hand.

Over at Commentary, Max Boot is certainly among those who hopes that there will be:

Considering that Power and to a lesser extent Rice have argued that the U.S. has a “responsibility to protect” populations subject to genocide or other war crimes, it would be disheartening indeed if the administration in which they serve at increasingly senior levels were to continue to do little as the list of atrocities in Syria pile up. Especially when there is growing support in the region for action. Just this week Secretary General Ekmeleddin Ihsanoglu, a Turkish academic and diplomat who is head of the 57-country Organization of Islamic Cooperation (OIC), called for the imposition of a no-fly zone in Syria. However much Turkey, Saudi Arabia, and other regional allies would support such a step, they are not going to impose a no-fly zone on their own. That depends on American leadership, which so far has been conspicuously missing.

Obviously, Boot is among those that favors greater American involvement in the Syrian civil war and he’s hoping that bringing Rice and Power closer in to the President’s inner circle will influence the President to take steps to seek that greater involvement notwithstanding the obvious risks of doing so and the fact that the American people clearly do not favor such a course of action. Based on what we know about the two of them, it’s perhaps not an unfounded hope on his part. After all, both have written and spoken extensively on the idea of using American power to prevent and put an end to glaring human rights abuses even in situations where American national interests are not directly at stake. However, as Mark Landler notes at The New York Times, Rice and Power have been far more circumspect when it comes to the Syrian situation than their previous rhetoric might have predicted:

[A]s Mr. Obama and his aides have long argued, Libya is no Syria. The first was a clear-cut case in which air power could prevent Col. Muammar el-Qaddafi from killing thousands of rebels in their stronghold; the second, a sectarian struggle, pits a regime with sophisticated air defenses against rebels scattered throughout the country.

Neither Ms. Rice nor Ms. Power has spoken out publicly in favor of a more aggressive American response to the blood bath in Syria, which is perhaps not surprising, given Mr. Obama’s well-known views and their own roles as rising stars in his administration.

Administration officials said that in the debate last summer about whether to supply the rebels with arms – a proposal pushed by the then-director of the Central Intelligence Agency, David H. Petraeus – Ms. Rice sided with those who opposed it. Over time, however, officials said, she has become more open to lethal aid, given the stalemate in the civil war.

Gary Bass, a professor of politics and international affairs at Princeton University, said that in formulating its Syria policy, the administration would have to answer a basic question.

“Do you think of Syria as being a Rwanda or a Bosnia, where human rights concerns trumped everything?” he said. “Or do you see it as more like Iraq, where it’s not clear there’s a good side to get behind?”

There are other voices for stronger action, including Secretary of State John Kerry. He may find common cause with Ms. Rice on Syria even as he struggles to carve out an influential role in an administration where decision-making resides at the White House.

Rice is known as a liberal interventionist (as is the woman being named to replace her at the UN, the writer and former National Security Council staffer Samantha Power), but advocates of greater American involvement in the Syrian civil war, the most acute problem Rice will face in her new position, will be disappointed to learn that she isn’t particularly optimistic about the effect that any U.S. action — such as imposing a no-fly zone — will have on the war’s outcome.

Rice, like the president, seems focused on the possibility that the downfall of Bashar al-Assad’s regime could mean a victory for al-Qaeda-like groups that represent some of the strongest elements of the Syrian opposition. The Obama administration is desperately seeking to avoid the creation of terrorist havens in Syria, because they would represent a direct national-security threat to the U.S. and would require an armed American response.

The American experience in Libya — not the Benghazi attack, which was searing in its own way — has also chastened Obama’s national-security team: The intervention on behalf of rebels fighting the late, unlamented dictator Muammar Qaddafi, may very well have saved thousands of innocent lives, but the fallout from Qaddafi’s overthrow (the rise of al-Qaeda-like groups, the spread of Libyan weapons across Africa, the general misery and instability that now afflicts the country) has taught Obama’s advisers, Rice included, important lessons about the unpredictability of intervention. Politically, the administration has seen no upside to the Libyan intervention — it was criticized for recklessness by both Democrats and Republicans — and in a very political White House, these domestic considerations often take precedence.

It’s possible, of course, that Rice and Power have simply just been reflecting Administration policy in their previous comments, and that they will become more forceful advocates of greater American involvement in Syria once they are in positions where they have the ability to actually influence policy to a far greater degree than before. Furthermore, the fact that they both have a personal friendship with the President arguably makes their ability to have a voice at the table, as opposed to, say, John Kerry, that much greater. So perhaps Goldberg and Landler will end up being proven wrong and we’ll see significant changes in U.S. policy toward Syria once Rice and Power are in place, we really can’t know until we get there.

In the end, though, that seems unlikely based on what we do know. As noted, neither woman appears to have taken a strong pro-intervention position regarding Syria when given the opportunity. Perhaps it is the case that they share the view that seems to be prevalent in some quarters that sees Syria not as another Libya (although the past two years have shown that the Libyan intervention was far from a massive success), but as potentially another Iraq. It certainly does seem to have all the qualities of living up to that analogy. Like Iraq, Syria is torn by ethnic divisions that are likely to explode in the event the Assad regime falls, possibly bringing allies and enemies from neighboring states in to the conflict along with them. Putting American forces into the middle of that, or engaging in a policy that would effectively make the United States or the West responsible for the political future of Syria, a nation that was little more than the creation of the French to begin with, would be as big a mistake in the long run as the invasion of Iraq and our post-Saddam policy turned out to be. For all the faults you can ascribe to him for foolishly drawing “red lines” for Bashar Assad that clearly weren’t going to be enforced, it seems apparent that President Obama recognizes these risks and that he’s reluctant to get the nation  involved in another potentially long war after having gotten us out of Iraq and establishing the guide path for our withdrawal from Afghanistan. From their public comments, it would appear that Rice and Power share that view, as do other advisers on the President’s foreign policy team.

Power should most certainly be questioned about her previous comments about “Responsibility To Protect” and how it might apply to the Syrian situation. The American people deserve to know what kind of advice the President will be getting if she is confirmed. However, for the moment at least, it doesn’t appears as if the selection of Rice and Power is going to result in significant changes in the President’s policies in Syria. Hopefully, that turns out to be true.