A new ABC News/Washington Post poll has some bad news for the Tea Party movement:

There’s some bad news for the tea party in the new Washington Post-ABC News poll. Just 26 percent of Americans say they hold a favorable view of the movement — a record low.

It doesn’t end there.

Roughly one in three (34 percent) Republicans hold an unfavorable view of the tea party. So do 62 percent of independents.

Two thirds of Americans (67 percent) disapprove of the way tea party-aligned GOP members of Congress have handled budget negotiations, including about half of all Republicans (49 percent).

Finally, a majority of Americans (54 percent) say they oppose the tea party movement, including nearly three in 10 Republicans (28 percent) and more than half of independents (54 percent). 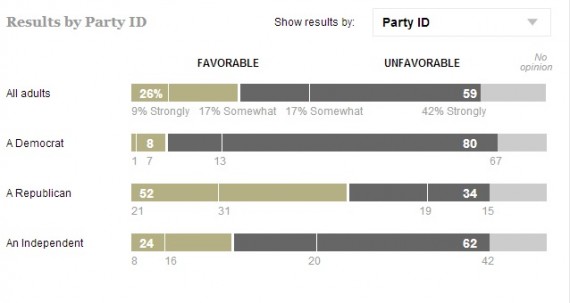 One, it’s clear that opposition to the tea party isn’t just driven by Democrats. The GOP’s divide over the movement is pretty striking. And it suggests more discord is in store for a party that has been struggling to find its footing after two straight presidential defeats.

The question, of course, is whether this will cause more traditional Republicans to begin pushing back against the Tea Party tide.