The Ames Straw Poll isn't going away any time soon. 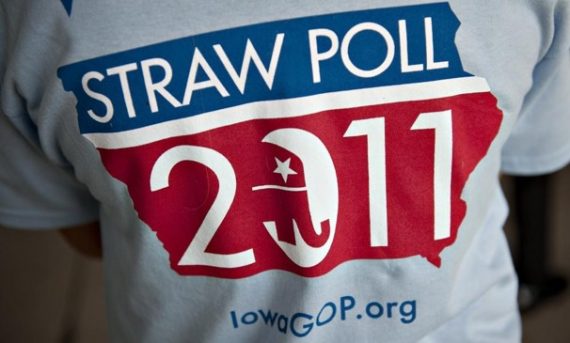 With Michele Bachmann’s sixth-place finish last night, including her failure to even place in the top three in Black Hawk County (the county she lived in until she was 12 and from which she had launched her campaign), has led to much discussion about the Ames Straw Poll. After all, Bachmann won the contest in August, although barely so. Now it’s clear that summer day in August was her high point, and many are wondering if the Ames Poll means anything at all:

We have just received yet another confirmation of the virtual uselessness of the Ames Straw Poll. The proud winner of the straw poll, Michelle Bachmann came in sixth in the Iowa caucuses (and in fact finished dead last among all serious contestants-Jon Huntsman just ignored Iowa). Furthermore, she only managed to win just slightly more votes in the caucus than in the straw poll, even though the turnout was seven or eight times greater!

In the four and a half months between the straw poll and the caucuses she, unlike some other fellow candidates, did not have a brain freeze in a debate, was not accused of any sexual misconduct, did not have a barrage of negative ads targeted at her and did not have any other obvious reason for a dramatic collapse of her support in the state.

The winner, Mitt Romney received an eight times greater share of the vote in the caucuses than in the straw poll (in which, incidentally, he won the seventh place) – and he did not even do much campaigning in Iowa except for the last few weeks!

The (very close) runner-up, Rick Santorum, increased his share of the vote by a factor of two and a half.

Of course, it’s worth noting that on the same day that Michele Bachmann was shaking hands and eating Corn Dogs in Ames on her way to victory, Rick Perry was down in South Carolina entering the Presidential race. Once he did, he completely overshadowed her for what I think are rather obvious reasons. Yes, it’s true that Bachmann didn’t have the same fall from grace that other candidates did — although her rants about Gardisil during the September debates came pretty close — but it was clear even before Ames that her rise in the poll was not going to last. She lacked the experience, the campaign organization, and the staying power to last for very long at the top of the field. Once a candidate that appealed to the same set of voters as Bachmann, but with more experience, more money, and a better campaign appeared, her downfall was inevitable regardless of what had happened in Ames.

In the past, the Ames poll has been at least somewhat predictive of the final outcome of the Caucuses that take place some 5-6 months later. George H.W. Bush, for example, won the first Ames Straw Poll in 1979 and ended up winning the Iowa Caucuses the following year. Pat Robertson won at Ames in 1987, with Bob Dole coming in second place, a result that was the first reflection of the fact that the televangelist would do well in the caucuses themselves, although Bob Dole ended up winning them in 1988. In 1995, Bob Dole and Phil Gramm tied at Ames, with Pat Buchanan in second and, although Gramm faded over the following months, it was Dole who ended up winning the 1996 Caucus with Buchanan a close second. In 1999, George W. Bush scored a decisive victory at Ames and a decisive victory in the caucuses in 2000. Finally, in 2007 Mitt Romney eked out a victory at Ames over Mike Huckabee but the order of finished was reversed at the caucuses 5 months later. In some sense, then, you could say that 2011 was the first year that the Ames Straw Poll failed so badly, but then this has been a very unusual election cycle. [Source for Ames Straw poll winners here, Source for Iowa Caucus winners here]

After the August straw poll, James Joyner wrote this:

The Ames Straw poll is reasonably predictive of the Iowa Caucuses, which is not particularly predictive of the nomination. But, because they both come early in the process when the media is starving for something to cover, they get inordinate, undeserved attention. To use a sports analogy, Ames is like the first big scrimmage of training camp and the Caucuses are the first preseason game of the NFL season. A lot of ink is spilled on those, too, because fans are desperate for information about their teams. But teams frequently go undefeated in the preseason and miss the playoffs entirely, while it’s not unusual for Super Bowl winners to have had lousy preseasons. In both football and Iowa, then, what really matters is avoiding catastrophic injuries in order to survive to the games that count.

This is a pretty apt analogy. Ames gets attention because it is the first big scrimmage of the primary pre-season for Republicans (the Democrats in Iowa have no equivalent to the Ames Straw Poll), the first test of candidate organizational strength, which has always been an important factor in the caucuses themselves. Yes, they probably get more attention than they should, but then so does Iowa itself. That’s the nature of the beast we have created. So the fact that the results were so odd this time around doesn’t mean we’ll end up seeing he end of the Iowa Caucus. If anything, in 4 (or 8) years you will see other campaigns do what Bachmann and Ron Paul did with the ground operations that brought hundreds of volunteers to Ames to vote.

There’s another reason the Ames Straw Poll won’t go away, though. It is a huge fundraiser for the Iowa Republican Party. Every four or eight years, they are able to sell prime real estate at the site where the straw poll takes place to campaigns eager to have an impressive presence, sometimes even though they have absolutely no shot at winning. Michigan Congressman Thad McCotter, for example, whose campaign ended as soon as it began, paid a reported $18,000 for the prime spot at the event. Other candidates paid thousands of dollars to cater their event tents with food, entertainment, and swag for the people attending. That, combined with the hundreds of reporters there covering the whole thing, is obviously a huge boost to the local economy. Additionally, the Iowa GOP makes money selling the tickets that people need to buy in order to have a right to vote in the straw poll.

As long as Iowa is first-in-the-nation, there will be an Ames Straw Poll.