The Midterms And The Economy: Bad News For Democrats?

Republicans are winning with voters on the issues they say they care the most about.

A new Gallup poll presents some potentially bad news for Democrats headed into the 2014 midterms:

Nearly nine out of 10 voters say the economy will be “extremely” or “very” important to their vote for Congress in the midterm elections, a good sign for Republicans who have slight advantage over Democrats on the issue, a new Gallup poll shows.

According to the poll, the next four issues considered important by voters are the budget deficit, taxes, health care reform, and income inequality. Democrats have the upper edge with voters when it comes to health care and income inequality, but Republicans have the advantage on taxes and the deficit. This isn’t entirely surprising, of course. Exit polls for pretty much every Presidential and midterm election going back decades shows that, outside of odd years in which a foreign policy issue of some sort has dominated the headlines, the issue on the top of voters minds when they enter the voting booth is the economy and the myriad of issues related to it such as taxes and the budget deficit. The party deemed by voters to have better ideas on that issue is the one that ends up with the polling advantage heading into the election and, more often than not, the one that ends up winning the election. If that holds up as we head toward November, then 2014 could ends up being a problematic year for Democrats.

Additionally, as this chart shows, the issues where Republicans have the advantage are considered more important by voters at this time than the issues on which Democrats the advantage: 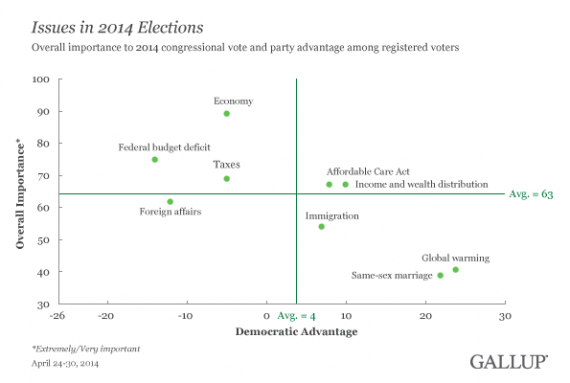 Perhaps most significantly, the issues that many, myself included, have stated numerous times are trouble spots for Republicans — immigration, marriage equality, and global warming — are very far down the list when it comes to issues that voters are saying will be important to them when they decide who they’re going to vote for in November. This suggests a few things. First of all, poll results like this make it less likely that Republicans in Congress will feel compelled to act on immigration reform before the midterm elections. Second, it seems unlikely that Democrats will be successful in using issues such as these as “wedge issues” against Republicans in close races for the House or Senate. Finally, poll results like this tend to make the arguments of those who argue that the GOP has to change its position these issues weaker, at least in the short term. As has almost always been the case in national elections, it is the economy that’s going to drive the narrative in 2014, and if this poll is to be believed then that poses a potential problem for Democratic candidates.