The Administration's narrative regarding the attack that resulted in the death of Ambassador Christopher Stevens no longer holds water. 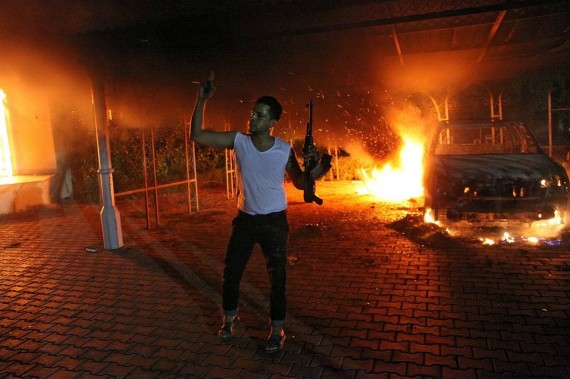 In the ten days since the attack on the United States Consulate in Benghazi, the understanding of what actually happened that night has changed significantly, but the White House has largely kept to a narrative that made little sense as facts started to come out. Appearing on the Sunday morning shows at the beginning of this week, Susan Rice, the President’s Ambassador to the United Nations, insisted that the attack was the spontaneous result of protests over a film depicting Mohammed that appeared only on YouTube and which nobody had ever heard of before September 11th. At the same time, the President of Libya and other Libyan officials, were saying that the attack was a pre-planned terrorist attack. Indeed, the more we learned about the attack itself, the less likely it seemed like it could have been anything but a pre-planned attack, and it’s connection with the protests became tenuous at best when it was revealed that the attack had taken place hours after a small protest in front of the Consulate earlier in the day.

Today in The Daily Beast, Eli Lake catalogs additional evidence that the Administration’s insistence that this was a spontaneous attack about a movie simply doesn’t hold water:

[T]here is mounting evidence that the White House’s initial portrayal of the attacks as a mere outgrowth of protest was incorrect—or, at the very least, incomplete. The administration’s story itself has recently begun to shift, with Matthew Olsen, the director of the National Counter-Terrorism Center, telling Congress on Wednesday that the attackers may have had links to al Qaeda and Carney characterizing the incident as a “terrorist attack.” (Hillary Clinton announced on Thursday that she was putting together a panel to look into the incident.

But other indications that the White House’s early narrative was faulty are also beginning to emerge. One current U.S. intelligence officer working on the investigation into the incident told The Daily Beast that the attackers had staked out and monitored the U.S. consulate in Benghazi before the attack, a move that suggests pre-planning.

What’s more, two U.S. intelligence officials told The Daily Beast that the intelligence community is currently analyzing an intercept between a Libyan politician whose sympathies are with al Qaeda and the Libyan militia known as the February 17 Brigade—which had been charged with providing local security to the consulate. In the intercept, the Libyan politician apparently asks an officer in the brigade to have his men stand down for a pending attack—another piece of evidence implying the violence was planned in advance. (Plenty of Libyans, of course, did try to protect the consulate. “Many of those Libyans died in the gunfight fighting off the attackers,” one of the officials said. “But there were some bad apples there as well.”)

One other aspect of the administration’s story appears shaky as well. Speaking to ABC News on Sunday, U.S. ambassador to the United Nations Susan Rice responded to allegations that there wasn’t enough security at the embassy by saying, “Tragically, two of the four Americans who were killed were there providing security. That was their function. And indeed, there were many other colleagues who were doing the same with them.”

But two former special operators and a former intelligence officer, two of whom had worked with Doherty, told The Daily Beast that Doherty and Woods’s job was not to protect Ambassador Chris Stevens. That job falls to Regional Security Officers or RSOs. During the fighting, some RSOs who were supposed to protect the ambassador apparently became separated from him.

“Glen died for Tyrone and Tyrone died for Glen,” one of the former special operators told The Daily Beast. “They fought bravely, but they did not die protecting the ambassador.”

That leaves open the question of who, if anyone, was protecting Ambassador Stevens. This is an especially important questions given the reports that came out yesterday that Ambassador Stevens had expressed concern about security threats in the past and may have even been on an al Qaeda hit list.  If that’s the case, then one has to wonder why he wasn’t provided with more security, or indeed why it was considered wise for him to travel to Benghazi on the anniversary of the September 11th attacks when the city has been the site of attacks on Western outposts for months now, and the U.S. had reportedly received warnings of unrest in the city prior to the attack. At the very least, this suggests the possibility of a significant intelligence breakdown that led to the deaths of four Americans and the utter destruction of our consulate. At the worst, it suggests some fairly bad incompetence on the part of someone at the State Department.

As I’ve noted before, it’s worth remembering that the investigation into this attack has not been completed, and I for one am not suggesting that this was definitely a pre-planned terrorist attack, although there are plenty of signs that seem to point in that direction. For some reason, though, the White House decided to jump out in front of the investigation and insist, even in the face of less-than-credible evidence that Ambassador Stevens and three other Americans died because people were upset about a badly made movie on YouTube. They stuck to this narrative to the point of sending one of their top foreign policy spokespersons on television to repeat it several times in one day, and it was also repeated by the White House Press Secretary, even when evidence to the contrary started to become apparently. Now, of course, the Administration is at least admitted that this was an act of terror, I suppose that’s something. But, are they really going to insist that an operation of this scope was all about a movie? And why would they?

Some have suggested political motives for the White House’s decision to push what seems like a nonsensical narrative about the Benghazi attack, namely that they believe it would be politically disadvantageous to acknowledge a terrorist attack at this point in the election cycle. If that’s their motivation, then it’s pretty reprehensible. Trying to spin an international crisis in a manner that is most politically beneficial doesn’t really strike me as something that Presidents ought to be doing. At the same time, though, this would be somewhat atypical for the Obama White House in its handling of matters such as this. So what’s the explanation? Why did they jump out ahead of the investigation and set a narrative instead of merely saying that we need to await the outcome of the investigation itself? Why did it take them so long to acknowledge the rather obvious fact that, spontaneous or planned, the attack itself was in fact a terrorist attack? The Administration has acted very oddly in response to this attack and, but for the fact that Mitt Romney has spent the 10 days since it happened shooting himself in the foot one way or another, it might actually end up hurting the President in the polls.