This Moment in Time

The Trump administration's approach to immigrant children is a serious test of our national morality. 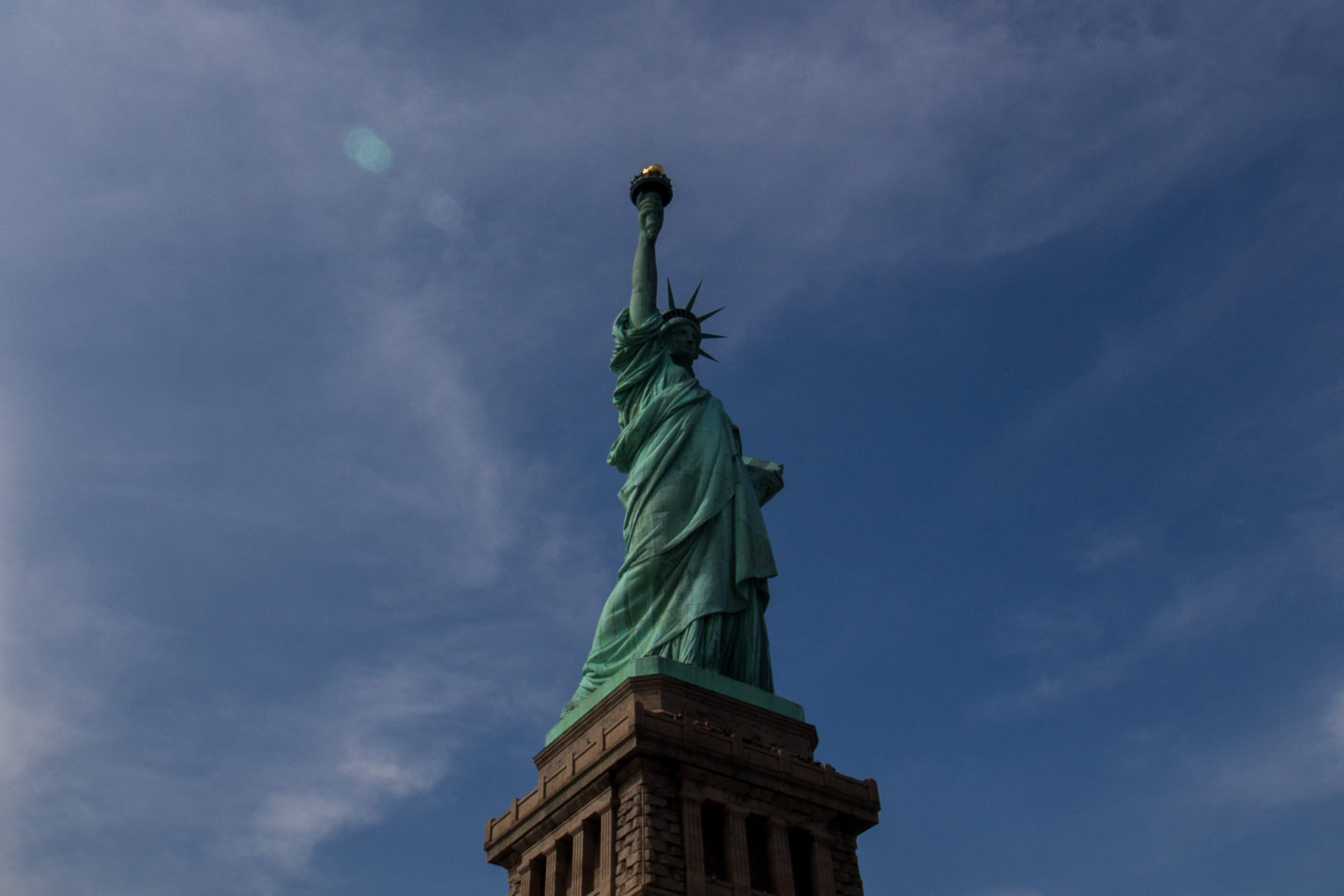 My family and I recently visited Ellis Island. It was a reminder of something I already knew, which was that for much of history we had an essentially open border.  I was struck that, according to information at the museum on the island, that only 2% of the immigrants who came through that port of entry were sent back home (due to inability to work).  Many (most, I expect) did not speak English and the vast majority were quite poor.  A huge number were fleeing terrible conditions in the homelands (sound familiar?).  Oddly, this past did not destroy America–rather, it objectively strengthened it.  Those facts underscore that any present day argument about “the law” is highly flawed.  Not only is the law mutable, its application is subject to interpretation.  So, there is no need to pretend like what we are doing now, or how we are doing it, simply has to be.  Our immigration laws were not handed down by God to man on granite tablets.  Indeed, they are in of need a massive overhaul.

However, a massive overhaul is not in the works. Instead, we have a president who thinks that a border wall (that, I guess, Mexico is not going to pay for) will fix the issue (spoiler alert:  no, it won’t) and an administration which thinks that cruelty towards families will act as a deterrent to immigration.

This dates back to at least last year.  Here’s what then DHS Secretary Kelly said in March of 2017 (via CNN):

Secretary of Homeland Security John Kelly confirmed that the department is considering separating children from their parents at the border.

He continued: “Yes I’m considering (that), in order to deter more movement along this terribly dangerous network. I am considering exactly that. They will be well cared for as we deal with their parents. … It’s more important to me, Wolf, to try to keep people off of this awful network.”

Since April, and because the Attorney General has announced a “zero tolerance” policy, it appears that what Kelly described is now in place.

Manuel Padilla Jr., Border Patrol chief for the Rio Grande Valley, told The Washington Post on Thursday that his agents had separated 568 parents from children as young as 5 since the zero-tolerance policy was announced on April 6.

But that figure represented only half the number of parents who could have been prosecuted for entering the country illegally, leaving Border Patrol plenty of room to ramp up family separations.

“We are trying to build to 100 percent prosecution of everybody that is eligible,” he said. “We are not there yet, but that is our intent.”

Nationwide, nearly 2,000 minors were taken from their parents from April 19 through May 31, according to figures from the Department of Homeland Security.

Dressed in green fatigues, the 32-year member of the Border Patrol was unapologetic. He said years of lax enforcement had only encouraged more violators.

“This zero-tolerance initiative changes that completely,” he said. “We cannot just have this surge of immigration without any consequences.”

Padilla’s perspective is important, because while there have certainly been plenty to critique in past administrations, this is a new approach by the current administration to actively leverage separating children from parents.

What makes this current moment worse is that the President of the United States, as well as the Attorney General, the top two law enforcement officials in the country, are actively pursuing this cruel policy option while, as Doug Mataconis correctly noted, lying about a legal requirement to do so. And, to make things even worse, Trump is actively lying about who is responsible for the current policy as well as trying to leverage his own administration’s cruelty as a legislative bargaining chip.

A big part of this present moment is the degree to which supporters are comfortable being lied to.

“I hate the children being taken away,” Mr. Trump told reporters on Friday morning in front of the White House. “The Democrats have to change their law — that’s their law.”

A short time later, he wrote on Twitter, “The Democrats are forcing the breakup of families at the Border with their horrible and cruel legislative agenda.”

These statements are galling for several reasons.  First, the current policy approach is one his administration is putting into practice:

There is no law that says children must be taken from their parents if they cross the border unlawfully, and previous administrations have made exceptions for those traveling with minor children when prosecuting immigrants for illegal entry. A “zero tolerance” policy created by the president in April and put into effect last month by the attorney general, Jeff Sessions, allows no such exceptions, Mr. Trump’s advisers say.

Second, the notion that the minority party is responsible is absurd.  The Democrats lack the ability to bring legislation forward for debate in both chambers.  It is therefore not even possible for them to act in any substantive way.

Third, it is not an issue of “their” law–there is just the law of the United States and if it is unjust, those in government ought to work to change it (especially if one is to take the President at his word, but alas that is a quaint notion at best).

Meanwhile, just this week, the Attorney General of the United States has announced what an essay in Foreign Affairs called Sessions’ Draconian Asylum Decision

On Monday, U.S. Attorney General Jeff Sessions made a radical decisionthat will undoubtedly result in death or significant harm to some of the world’s most vulnerable women: victims of domestic violence who live in countries that do not, or cannot, protect them from their abusive partners. Over the past two decades, the United States has provided a safe haven to many of these women through its asylum laws. In a heartless move that flouts established U.S. law and international human rights standards, Sessions found that a domestic violence victim from El Salvador—perhaps the most dangerous country on earth in which to be a woman—would not qualify for asylum, even though her own country had utterly failed to protect her.

Ultimately this is all being fed by xenophobia and racism.  This administration has actively cultivated fear of immigrants–whether we are talking refugees from Syria, people fleeing violence from Central America, DACA recipients, or Mexicans trying to find work.

Indeed, Trump started his campaign with racially charged, xenophobic rhetoric.  Lest we forget:

I was standing in the baggage claim area of Reagan National and the TV was playing the speech live and I thought he was nuts and that there was no way he could be nominated, let alone elected.  I was, rather publicly, wrong about that.  But that the man who started his bid for the White House with those words is now overseeing a cruel policy of using parental separation to deter immigration is no surprise. And let’s not forget that Trump broke DACA, thereby victimizing a group of persons in a very difficult legal state not of their own making. He also attacked the notion that we should help Syrian refugees and took away protections from Salvadorans who have lived in the US for decades (as I discussed here).

Further, the president and his supporters constantly talk about the threat posed by immigrants and frequently conflates “immigrants” and MS13.

The bottom line is this:  to use the police power of the state to consciously inflict pain on a vulnerable group to create political leverage is wrong, if not evidence of an authoritarian mindset.  Further, when that action is aimed a a minority group in the context of anti-minority rhetoric, it is impossible not to also call it racist.

We should not ignore, dismiss, rationalize, or minimize these facts.

I understand that there are legitimate concerns about border security.  I accept that there are honest differences of opinion about what policies ought to be in place regarding said security. But those who are defending this policy of consciously using children as leverage need to take a hard look at what they are supporting, and why.

A tangential example to what is going on at the moment can be found in today’s NYT: A Legal Resident, an Arrest by ICE and Father’s Day in Jail

Jose Luis Garcia was watering his lawn and drinking his morning coffee outside his home in Southern California last Sunday when federal immigration authorities showed up.

Mr. Garcia — a 62-year-old Mexican immigrant who has been a legal resident since the 1980s, according to his family — shouted for help.

He spilled his coffee on the sidewalk as agents arrested him, said his daughter Natalie Garcia, who ran outside and saw her father handcuffed. She said the authorities told her they had a warrant for his arrest related to a misdemeanor domestic violence charge that was resolved nearly two decades ago.

Mr. Garcia and his family are among those who have been swept up in the Trump administration’s immigration policy, which cracks down not only on illegal immigrants but also on legal residents. The administration makes it a priority to remove those who have pending criminal charges or any convictions in their past.

In 2001, Mr. Garcia was convicted of a misdemeanor stemming from a dispute with his wife, according to his lawyer and his family. A spokeswoman for the Los Angeles Superior Court said he was sentenced to 25 days in jail and three years of probation. Ms. Garcia said that her father completed probation.

It was a domestic dispute they settled years ago, and “they are still married to this day,” Ms. Garcia said.

Who, precisely, is it helping to target a green card holder for deportation for a misdemeanor conviction (for which a sentence was served) from 17 years ago?

A spokeswoman for ICE said in a statement that Mr. Garcia was arrested because he “has past criminal convictions that make him amenable to removal from the United States.”

The spokeswoman would not specify the convictions, citing privacy rules. Ms. Garcia said she was not aware of other convictions in her father’s past.

That is a terrible answer, and draws my mind to the writings of Hannah Arendt and the origins of totalitarian government, as she wrote of the mindless bureaucracy of authoritarian functionaries.  When I hear people say that they are just enforcing the law, I hear echos of “I was just following orders.”  On the one hand, I recognize that it sounds alarmist to even draw such comparisons to the US government, yet on the other we need to take stock of what we are doing in regards to immigration policy, especially as it pertains to ICE behaving as described above.

What do we stand for, America?  History is not going to look kindly on these events.