The Trump Administration has been hit with two new lawsuits over the President's decision to end the DACA program. 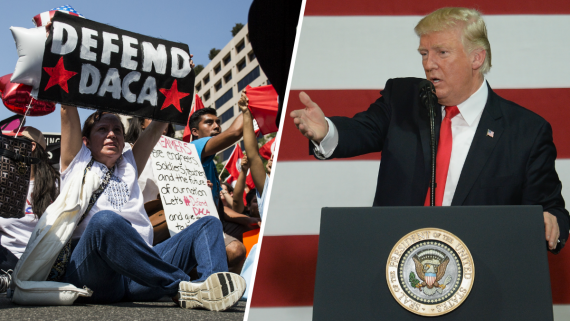 In the weeks since the Trump Administration announced that the Deferred Action for Childhood Arrivals (DACA) program put in place by former President Obama in 2012 to protect undocumented immigrants who were brought to the United States as children by their parents, it has faced a wide variety of pushback against the decision. Politically, the move has been criticized by many people on Capitol Hill. This list has included Speaker of the House Paul Ryan and Senate President Pro Tempore Orrin Hatch, as well a host of other Republicans such as Florida Governor Rick Scott and North Carolina Senator Thom Tillis. Outside of politics, support for keeping the program came from the business community and religious groups.  Additionally, the policy announcement has led to the filing of a number of lawsuits by a wide variety of sources, including a DACA beneficiary in New York, a group of Democratic-controlled states, and the University of California. This week, we’re seeing those lawsuits pile up with the addition of two more to the list on opposite ends of the country.

Over the weekend, a group of so-called “Dreamers” and beneficiaries of DACA filed a suit against the policy change in Federal District Court in San Francisco:

Brought to the United States illegally by her parents as a child, Garcia is one of six immigrants who sued the Trump administration on Monday over its decision to end the Deferred Action for Childhood Arrivals, or DACA, program. Since it was authorized in 2012 by President Barack Obama, the program has provided protection from deportation and the right to work legally to nearly 800,000 young people.

Garcia’s case, filed in San Francisco federal court, is the first to be brought by DACA recipients, known as Dreamers, since U.S. Attorney General Jeff Sessions announced earlier this month that the Obama-era policy would start winding down in March 2018, according to Garcia’s lawyers.

It is among several lawsuits challenging the decision to end DACA, including two cases brought by state attorneys general.

The legal claims in all of the cases, including Garcia’s, are similar: that the Trump administration did not follow proper administrative procedure in rescinding DACA, and that making enforcement promises to a group of people, only to revoke them, violates due process.

The daughter of a hotel housekeeper and a welder, Garcia arrived in Southern California from Mexico at the age of 4. A few years later, she said, her family was ousted from their apartment because the property contained illegal units.

“We were living out of my dad’s truck for a little bit there,” she said.

Garcia decided to become an attorney after working for a criminal defense lawyer in high school. She put herself through school working for lawyers and performing other jobs such as parking cars.

After Obama announced DACA in 2012, Garcia, now 34, seized the opportunity. When she filled out forms for a social security number in 2013, the government clerk congratulated her.

“I cried right there,” she said.

Jirayut “New” Latthivongskorn, another plaintiff in the lawsuit on Monday, was brought to the United States from Thailand when he was nine. Latthivongskorn is now a fourth year medical student at University of California San Francisco and a master’s degree candidate in public health at Harvard. His DACA work authorization expires in January 2019.

His medical residency is not set to begin until a few months after that, and could be impossible if he loses his authorization to work legally.

“I have all these big ideas about how I want to change the world and change systems around health care,” he said. “The fact I might not be able to get there is troubling and frustrating.”

Yesterday, it was the NAACP that joined in the lawsuits with its own filing in Federal District Court in Washington, D.C.:

The NAACP on Monday filed a lawsuit against President Trump over his decision to end the Deferred Action for Childhood Arrivals (DACA) program.

The organization is also suing Attorney General Jeff Sessions and other Trump administration offices and officials, including Immigration and Customs Enforcement, on behalf of people of color who were eligible for the program.

The group wrote in a press release Monday that the vast majority of DACA recipients are people of color, including the 80 percent of participants who are Mexican.

The NAACP is alleging that Trump violated due process, the equal protection clause and regular administrative procedures in deciding to end DACA.”This tells us that cancelling the DACA program not only violates the Equal Protection Clause of the Fifth Amendment but also possesses a racially-motivated component,” Derrick Johnson, the interim president and CEO of the NAACP, said in a press release. ”Defendant Trump’s nasty, prejudiced sentiment couldn’t be further from the truth.”

“Immigrants and DACA registrants have been positive members of society; they contribute to community; they open businesses; they pay taxes and they are generally law abiding. Kicking DACA registrants and eligible people out of the country and upending their lives is not the American Way.”

The legal claims raised in both of these lawsuits are basically identical to the other three that we’ve seen filed across the country, and like all the others it faces what could be an uphill legal battle given the deference typically given to Presidents in the exercise of their Constitutionally granted authority. These claims include both statutory and Constitutional claims, beginning with the argument that the decision to end the program violated the Administrative Procedure Act because it failed to follow the guidelines set forth in that law which Executive Branch agencies are typically required to follow when adopting new regulations. Among other things, the law requires that the agency in question allow for a notice and comment period, meaning that it must first public notice of intent to adopt or change a regulation and then a waiting period during which interested parties and members of the public are permitted to submit comments for the record regarding the proposed change, Only after that period has passed, the new or changed regulation can be enacted as a formal policy. This was the same argument raised by Republican states challenging the Obama Administration’s more expansive DAPA (Deferred Action For Parents of Americans) in their lawsuit against the policy. It also served as the main grounds under which a Federal Judge issued an initial stay that was upheld by the Fifth Circuit Court of Appeals and by a 4-4 decision of the Supreme Court at the end of its last term. Not all changes in regulations are required to follow the APA, but if the DACA delay falls within those that do then the Trump Administration’s failure to follow the law would mean that the change cannot go into effect.

In addition to this statutory claim, these lawsuits also raised the same claims under the U.S. Constitution that the other lawsuits do. These include a claim that the decision to end DACA is a violation of the Equal Protection Clause and that the decision to end the DACA program was motivated in large part by the intent to discriminate against a group of people that largely consists of people of Latino origin in general and Mexican origin in particular. The lawsuits also claim that the decision violates the Due Process Clause in that it seeks to deprive individuals of a right granted to them by a legal Executive Order issued by the previous President without due process of law. In both cases, the claims rely in no small part on statements that President Trump has made as President, as a candidate, and from the time before he was a candidate that allegedly indicate an intent to discriminate against people because of their national origin. This is similar, of course, to a tactic utilized by parties who were successful in challenging the travel ban on entry by people from six countries whose population is predominantly Muslim. Whether it will prove to be useful here is unclear.

As I’ve noted in the past, I’m somewhat skeptical of all of these lawsuits and whether they will have any impact on the road that the Administration has placed the DACA program on for the moment. As a general rule, Federal Courts have been deferential to Presidents exercising the authority granted to them under the Constitution and relevant Federal laws unless a credible case can be made that they’ve exceeded that authority or violated a statute such as the APA. As with the other case, though, it’s still far too early to tell if the lawsuits will provide DACA beneficiaries any relief from the sword of Damocles hanging over their heads. As it stands, the best chance for such relief would seem to lie with Congress and whether anything comes of the deal purportedly reached between President Trump and Congressional Democrats last week. Absent such action, a receptive court, or the unlikely event that the President changes his mind about canceling the program, the clock is ticking for many of the estimated 800,000 or so people who have benefited from the program President Obama put in place five years ago.

Here’s a copy of the Complaint filed by the six Dreamers:

And the Complaint filed by the NAACP: