The Trump Administration continues to insist that North Korea is violating promises that it clearly never made. 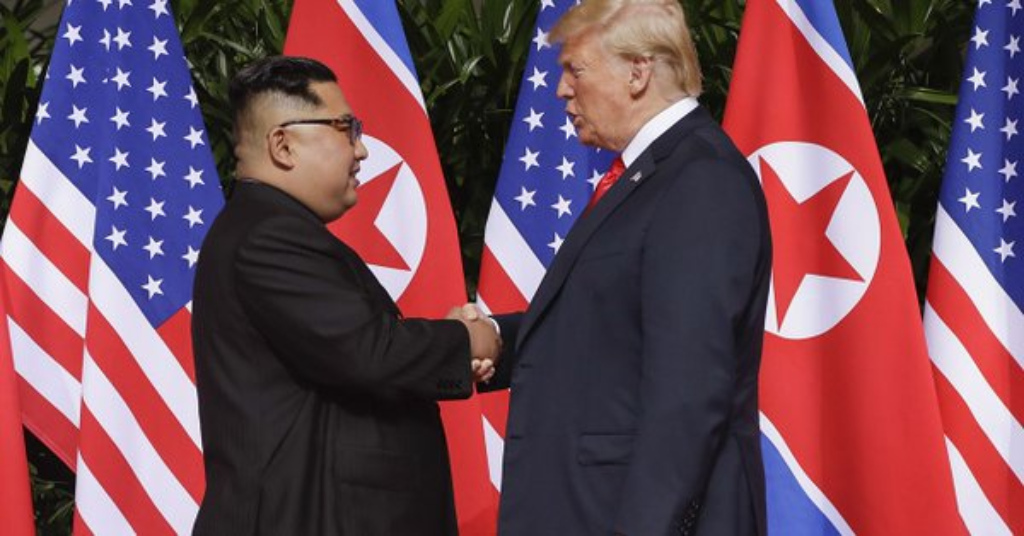 Secretary of State Mike Pompeo is claiming that North Korea is violating promises it never actually made:

SINGAPORE (Reuters) – Less than two months after a landmark U.S.-North Korea summit in Singapore, U.S. Secretary of State Mike Pompeo flew back to the city state on Friday and said North Korea’s continued work on weapons programs was inconsistent with its leader’s commitment to denuclearize.

Pompeo was asked en route to Singapore about his statement in the U.S. Senate last month that North Korea was continuing to make bomb fuel and reports that North Korea, led by Kim Jong Un, was building new missiles.

“Chairman Kim made a commitment to denuclearize,” Pompeo told reporters. “The world demanded that they (North Korea) do so in the U.N. Security Council resolutions. To the extent they are behaving in a manner inconsistent with that, they are a) in violation of one or both the U.N. Security Council resolutions and b) we can see we still have a ways to go to achieve the ultimate outcome we’re looking for.”

The truth, of course, is that North Korea made no such commitment at June’s Singapore summit meeting between Kim Jong Un and President Trump. As I noted earlier this week, there was nothing in the communique that was issued by the parties after the Trump-Kim that supports this argument. At best, the statement that was issued speaks in generalized terms about the two parties working toward the goal of “denuclearization” of the Korean Peninsula. However, this was little more than a general statement that failed to address the fact that the United States and North Korea have a very different idea of what “denuclearization” means, as I’ve explained in detail before. The important point, though, is that for the United States and its allies, “denuclearization” means that the DPRK would give up both its nuclear weapons research program and whatever weapons it had developed in connection with that program. The reality, though, is that there’s nothing in the statement issued after the summit that even comes close to saying this, and nothing in the words or actions of the DPRK in the period after the summit changes that conclusion.

In addition to this, the actions that the North Koreans have taken in the wake of the summit make it rather obvious that at least as far as they’re concerned there was no agreement made in Singapore to get rid of what they clearly seem to believe is a credible nuclear deterrent. Less than two weeks after the summit, for example, it was reported that North Korea was increasing production of the fuel needed to make additional nuclear weapons and that it was concealing the existence of ongoing nuclear weapons research at secret facilities well hidden from both surveillance and, most likely, the ability of the United States to take the sites out in a military strike. Additionally, it became apparent in the days after the summit that the much-publicized destruction of the DPRK’s primary nuclear weapons test site, an event it was witnesses by American and other international journalists at the invitation of the Pyongyang government was much less than met the eye and that the site could easily be rebuilt if needed in the future. This week, we learned that the DPRK had also begun work on the construction of new ballistic missiles at yet another secret site. As we sit here nearly two months since the summit, then, it is obvious that the reality of what had been accomplished at the summit did not meet the rhetoric. These are not the actions that one would expect from a nation that had agreed to “denuclearization” in the sense of giving up their existing nuclear weapons program. The biggest takeaway from the past month and a half, then, is that North Korea never actually agreed to any of the promises the Administration is now claiming it is failing to live up to.

The administration has been willfully misrepresenting what North Korea agreed to do for months, and now they want to shift the blame for their own inept negotiations by accusing the other side of breaching commitments that don’t exist. Everyone could see that the vague statement produced by the summit contained nothing that obliged North Korea to halt any of its nuclear weapons and missile development, and so they have continued to act like the nuclear weapons state that they are.

The reality is that there is no denuclearization deal with North Korea. North Korea isn’t and won’t be disarming. The Trump administration’s repeated lies that North Korea agreed to disarm have shredded what little credibility they might have had, and in the process they have been wasting time and squandering an opportunity to negotiate a more modest agreement with achievable goals.

A cynical person might say that the Administration is deliberately lying about what was agreed to in Singapore as part of a strategy that would be used to justify a more aggressive posture toward the DPRK in the future. In this sense, the Administration’s policy regarding North Korea could be said to bear resemblance to its policy regarding Iran and the decision to withdraw from the Joint Comprehensive Plan of Action (JCPOA), a move that was justified based largely on unsupported claims about what the agreement entails and misrepresentations about the state of Iranian compliance with the agreement. Based on those claims, Washington has been steadily increasing the pressure on Iran by reimposing sanctions that are causing pain to the average Iranian and playing right into the hands of the Revolutionary Guard and to the leaders in Iran who opposed the JCPOA. Similarly, with regard to North Korea, one could argue that the Administration is intentionally moving the goalposts in order to give itself an excuse for adopting a more confrontational approach in the future.

If the past seven months have proven anything, it is the fact that the North Koreans are interested in pursuing some kind of deal with South Korea and, most importantly, the United States that allows it to get out from under decades of isolation, economic pain, famine, and sanctions. There are many achievable goals we could achieve in exchange for this, but, as I’ve discussed before (see here, here, and here, for example) denuclearization as the West understands it is not one of them. As Larison says, the Administration would be best to aim for those achievable goals rather than the impossibility of “denuclearization” and the seemingly inevitable increase in tensions that would result if we continue to insist that the North Koreans do something that, for the foreseeable future, they clearly are not going to do.