President Trump is claiming that he didn't fire former F.B.I. Director James Comey because of the Russia investigation, even though he admitted the exact opposite just weeks after it happened. 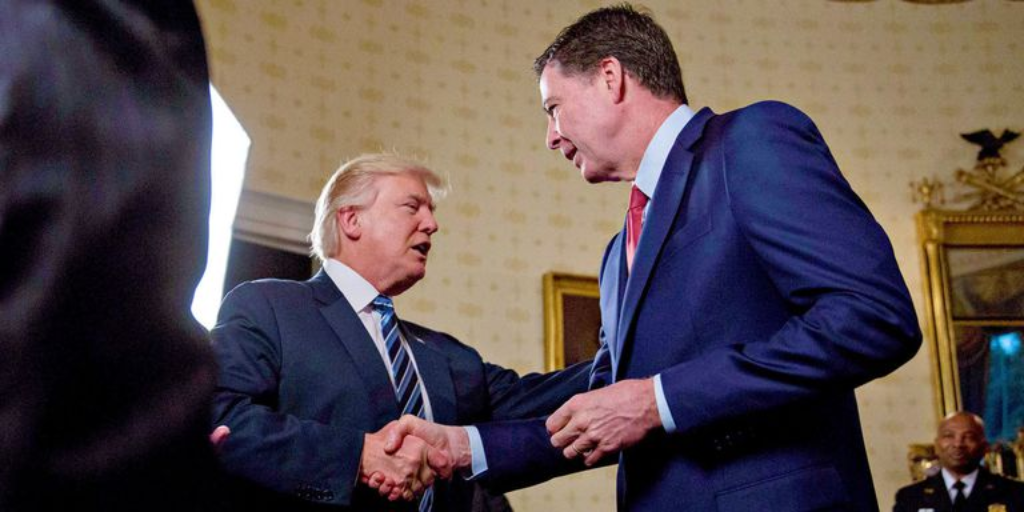 President Trump claimed Thursday he did not fire James Comey as FBI director over the Russia investigation, despite his prior statements that the issue contributed to Comey’s firing.

“Not that it matters but I never fired James Comey because of Russia! The Corrupt Mainstream Media loves to keep pushing that narrative, but they know it is not true!” he tweeted.

Comey’s firing is a focal point of Mueller’s probe into whether Trump obstructed the investigation into ties between his campaign and Russia’s interference in the 2016 election.

Trump and his allies have offered a series of changing explanations for his decision to fire Comey, which has complicated investigators’ effort to determine his intent.

Not that it matters but I never fired James Comey because of Russia! The Corrupt Mainstream Media loves to keep pushing that narrative, but they know it is not true!

All of this runs counter to the facts that have unfolded over the past year since the President fired Comey abruptly just days after the former F.B.I. Director had testified regarding the Russia investigation before a Senate committee. In that hearing, Comey publicly disclosed for the first time that the investigation included not just accusations of Russian interference in the election but also had expanded At the time Comey was fired, the Administration took the position that he was being fired due to his mishandling of the investigation of former Secretary of State Hillary Clinton’s use of a private email server and her handling of classified information They even released a long memorandum that had been prepared by Deputy Attorney General Rod Rosenstein that sought to justify the President’s action on that basis. Very quickly, though, it became apparent that there were other motives involved in the decision to fire Comey that had nothing to do with the Clinton investigation. As the days went on, though, it became more and more apparent that Comey was been fired because of the President’s frustration with the Russia investigation, something that Trump himself seemed to confirm. Trump topped off this revelation by appearing to threaten Comey with ‘tapes’ of conversations between the two men. Later, we learned that Trump had told the Russian Ambassador to the United States and the Russian Foreign Minister that he had fired Comey because of the Russia investigation just days after Comey’s dismissal. Finally, by the end of the week that had begun with Comey’s firing last year, Trump admitted that to Lester Holt of NBC News that he had fired Comey because of the Russia investigation. More recently, Trump appeared to try to walk those comments from last May back, but his own attorney Rudy Giuliani acknowledged in an interview earlier this month that Comey was indeed fired because of the Russia investigation.

Here’s the relevant section of the interview between Trump and Holt from more than a year ago:

This Trump tweet appears to be motivated by a report that appears in today’s New York Times that sheds further light on the motivation for Comey’s firing and once again confirms that the President’s motivation for the firing was clearly related to the Russia investigation:

In the document, whose contents have not been previously reported, Mr. McCabe described a conversation at the Justice Department with the deputy attorney general, Rod J. Rosenstein, in the chaotic days last May after Mr. Comey’s abrupt firing. Mr. Rosenstein played a key role in the dismissal, writing a memo that rebuked Mr. Comey over his handling of an investigation into Hillary Clinton.

But in the meeting at the Justice Department, Mr. Rosenstein added a new detail: He said the president had originally asked him to reference Russia in his memo, the people familiar with the conversation said. Mr. Rosenstein did not elaborate on what Mr. Trump had wanted him to say.

As several commentators have noted this morning, this revelation puts Deputy Attorney General Rod Rosenstein in somewhat of a difficult position because it suggests that Rosenstein may be a fact witness in the Mueller investigation to the extent that Mueller is looking at this McCabe memorandum and any conversations that Rosenstein may have had with the President related to the Russia investigation and the justification for firing Comey. If it were to be the case that Mueller considers the McCabe memo to be an important piece of evidence in the underlying investigation as it relates to potential obstruction of justice, then one can make the case that Rosenstein should recuse himself. If it turns out that the McCabe memo is not really a part of the investigation, then Rosenstein doesn’t really need to recuse himself. For what it’s worth, the report above does note in an unquoted portion that Rosenstein had consulted with the same ethics advisers in the Department of Justice that had recommended to Attorney General Jeff Sessions that he needed to recuse himself from the Russia investigation due to his role in the Trump campaign and his own contact with Russian government officials such as the Russian Ambassador to the United States.

Leaving the Rosenstein issue to the side for the moment, though, this Times report is yet further evidence that, nothwithstanding his claim on Twitter today, President Trump did indeed first James Cpomey due to the Russia investigation. He admitted this several times in the immediate aftermath of the event, he admitted it in a television interview that everyone can watch with their own eyes, and this McCabe memo appears to indicate he had initially directed Rod Rosenstein to include the investigation in his memorandum listing the reasons for Comey’s firing. In other words, this latest tweet is a bald faced lie. Which, of course, is just standard operating procedure for this President.