Trump’s CPAC Speech May Have Guaranteed His Re-Election

Reason's Nick Gillespie makes an interesting case but I don't buy it. 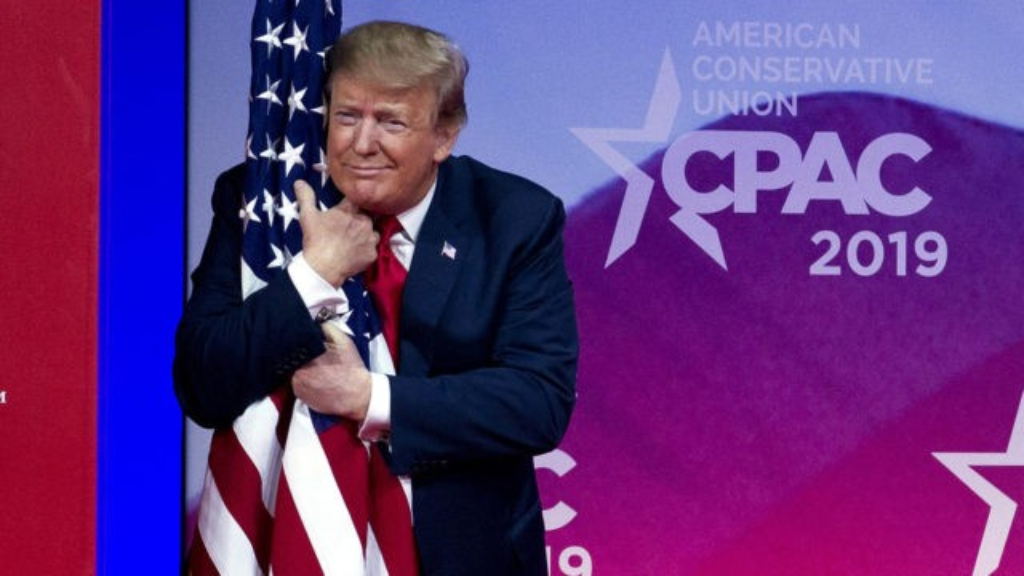 A haven’t watched and likely won’t watch President Trump’s speech to CPAC yesterday. Certainly, everything I’ve read about it matched up to Doug Mataconis’ description of it as a bizarre, incoherent rant.

One decided outlier by someone who is not one of the usual suspects, however, is worth highlighting. Reason’s Nick Gillespie declared “Trump Just Might Have Won the 2020 Election Today.”

It’s way too early to be thinking this, much less saying it, but what the hell: If Donald Trump is able to deliver the sort of performance he gave today at the Conservative Political Action Conference (CPAC), the annual meeting of right-wingers held near Washington, D.C., his reelection is a foregone conclusion.

There is simply no potential candidate in the Democratic Party who wouldn’t be absolutely blown off the stage by him. I say this as someone who is neither a Trump fanboy nor a Never Trumper. But he was not simply good, he was Prince-at-the-Super-Bowl great, deftly flinging juvenile taunts at everyone who has ever crossed him, tossing red meat to the Republican faithful, and going sotto voce serious to talk about justice being done for working-class Americans screwed over by global corporations.

In a heavily improvised speech that lasted over two hours, the 72-year-old former (future?) reality TV star hit every greatest hit in his repertoire (“Crooked Hillary,” “build the wall,” “America is winning again,” and more all made appearances) while riffing on everything from the Green New Deal to his own advanced age and weird hair to the wisdom of soldiers over generals. At times, it was like listening to Robin Williams’ genie in the Disney movie Aladdin, Howard Stern in his peak years as a radio shock jock, or Don Rickles as an insult comic. When he started making asides, Trump observed, “This is how I got elected, by going off script.” Two years into his presidency and he’s just getting warmed up.

Now, a combination of Aladdin’s genie, Howard Stern, and Don Rickles is pretty much the opposite of what I want in a Commander-in-Chief. And a reprise of the vapidity of the 2016 campaign would seem like a sure-fire loser. But I’m not the type of voter who decides elections, either.

First and foremost, Trump was frequently funny and outre in the casually mean way that New Yorkers exude like nobody else in America. “You put the wrong people in a couple of positions,” he said, lamenting the appointment of Robert Mueller as a special prosecutor, “and all of a sudden they’re trying to take you out with bullshit.” He voiced Jeff Sessions in a mock-Southern accent, recusing “muhself” and asked the adoring crowd why the former attorney generally hadn’t told him he was going to do that before he was appointed.

Democrats backing the Green New Deal (GND) “are talking about trains to Hawaii,” he said. “They haven’t figured out how to get to Europe yet.” He begged the Democrats not to abandon the GND because he recognizes that the more its details and costs are discussed, the more absurd it will become. “When the wind stops blowing, that’s the end of your energy,” he said at one point. “Did the wind stop blowing, I’d like to watch television today, guys?” “We’ll go back to boats,” he said, drawing huge laughs when he added, “I don’t want to talk [the Democrats] out of [the GND], I just want to be the Republican who runs against it.”

He railed against Never-Trump Republicans: “They’re on mouth-to-mouth resuscitation,” he said, adding “they’re basically dishonest people” that no one cares about. He joked about being in the White House all alone on New Year’s because of the government shutdown. “I was in the White House and I was lonely, so I went to Iraq,” he said, recounting that when his plane was approaching the U.S. airstrip in Iraq, all lights had to be extinguished for landing. “We spend trillions of dollars in the Middle East and we can’t land planes [in Iraq] with the lights on,” he said, shaking his head in disbelief. “We gotta get out.” He then riffed on the generals he met there who, contrary to the Pentagon brass he dealt with, said they could vanquish ISIS in a week. He claimed to have talked with a general named “Raising Cane,” which might be Brigadier Gen. J. Daniel Caine, but Trump is the farthest thing from a details guy, right? “Sometimes I learn more from soldiers than I do generals,” he said, deftly moving from jokes to more-substantive discussions of policies or issues.

Aside from the bit about the Iraq landing, this is mostly fever swamp stuff. Not to mention the sort of low-rent rhetoric past CPAC conventions would have used as fuel had it been uttered by even a marginal Democratic pol as evidence that the entire party eschewed American values.

You can cover a huge amount of material in two-hours-plus, and Trump certainly did that. After speaking sympathetically of immigrants who want to come to the United States and saying that we need more people because the economy (well, his economy, as he takes credit for it) is doing so well, he immediately dismissed the Guatemalans, Salvadorans, and Hondurans traveling north in caravans across Mexico. In a bizarre display of simultaneous empathy and contempt, he talked at length about how female migrants are being systematically “raped” but also how the caravans were filled with criminals and drug dealers. It was “sad to see how stupid we’ve become” to think that the caravans are filled with good people. As he has been doing since his State of the Union address, he has been laying out a partial, inchoate case for a skills-based immigration program. He explained walking away from the table with North Korea even as he noted yet again that he has a great relationship with the dictator Kim Jong Un. In a long riff on trade policy, he invoked the “Great Tariff Debate of 1888” and how China “and everyone else” had been taking advantage of us until he started pushing back. He took time to talk about how no, really, the crowd at his inauguration was in fact historically large despite all publicly available evidence.

All in all, it was, in the words of Daniel Dale, the Washington correspondent for the Toronto Star, “one of the least-hinged speeches Trump has given in a long time.” It was indeed all over the place but like the weirdly wide-ranging and digressive speech in which he declared a national emergency, it was also an absolute tour de force, laying out every major point of disagreement between Republicans and Democrats (abortion, the Second Amendment, and taxes, among other things) while tagging the latter aggressively as socialists who will not only end the private provision of health care but take over the energy sector too. Those charges take on new life in the wake of the announcement of the GND and comments, however short-lived, by Democrats such as Kamala Harris, who at one point recently called for an end to private health care. And over 100 House Democrats have signed on to a plan that would end private health insurance in two years. For all the biting criticism and dark humor in today’s speech, Trump has mostly ditched the “American Carnage” rhetoric that marked his first Inaugural Address, pushing onto liberals and Democrats all the negativity and anger that used to surround him like the dust cloud surrounds Pigpen in the old Peanuts cartoons. “We have people in Congress right now who hate our country,” he said. “We can name every one of them. Sad, very, very sad.”

So, Nick simultaneously agrees with those of us who think the speech—like the Trump presidency itself–is unhinged and yet thinks it’s going to go over like gangbusters with everyday Americans. I don’t see it. But, again, I’m likely not the best judge of the electorate.

Still, while it’s true that Trump won the Electoral College in 2016 with exactly this sort of approach, it’s also true that he did so against an incredibly divisive opponent who had been subjected to more than a quarter of century of damage from the Republican messaging machine. He’s probably not going to have that advantage again in 2020. (It’s remotely possible that Hillary Clinton will run again; I don’t see it happening, though.)

But maybe he’s got a point here:

But the 2020 presidential race is not going to be decided based on which candidate is more tightly moored to reality. It’s going to be decided, like these things always are, by the relative health of the economy and the large vision of the future the different candidates put forward. As the economy continues to expand (however anemically compared to historical averages) and he continues to avoid credible charges of impeachable offenses, Trump is becoming sunnier and sunnier while the Democrats are painting contemporary America as a late-capitalist hellhole riven by growing racial, ethnic, and other tensions.

Trump isn’t the creator of post-factual politics in America, he is merely currently its most-gifted practitioner (oddly, his ideological and demographic counterpart and fellow New Yorker Alexandria Ocasio-Cortez may become a challenger to him on precisely this score). Trump may have next to no credibility in profoundly disturbing ways, but American politics has been drifting away from reality for the entire 21st century, when the 2000 election was essentially decided by a coin flip, the United States entered the Iraq War under false premises, and Barack Obama took home Politifact’s 2013 “Lie of the Year” award and dissembled unconvincingly in the wake of Edward Snowden’s revelations.

That Trump didn’t invent the current situation doesn’t mean we shouldn’t be concerned about it, but if he can continue to perform the way he did today at CPAC, it remains to be seen what Democratic rival can rise to that challenge.

I think it more likely than not that the Democrats will nominate their most ideologically left candidate in three decades, maybe four. In some ways, that’ll be easier to lampoon than the relatively centrist policies of Hillary Clinton. But it may also be that promises of free health care and free college education will appeal to the desperate blue collar voters in the Rust Belt that made the difference in Trump’s election.

Presuming the economy doesn’t go into the inevitable next recession before election day, Trump will indeed have the advantage of a relatively good economy. But the economy was pretty good by those same measures in 2016. The problem remains that working people toward the bottom of the economy are falling further behind. And one imagines they’ll be inclined to blame Trump for that rather than looking to him as a potential Hail Mary savior.