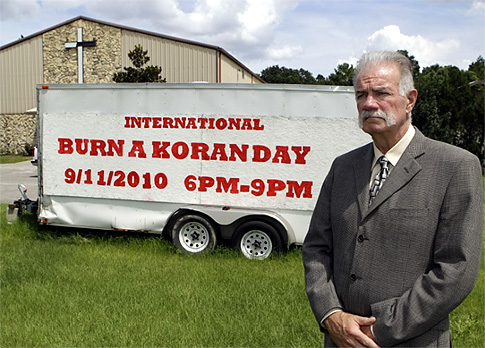 As I noted last week, Florida Pastor Terry Jones presided over a Koran burning earlier this month after promising not to do so back in September. The response across the Muslim world has been predictable, starting with a denunciation by the President of Pakistan and continuing today with deadly rioting in Afghanistan:

KABUL, Afghanistan — Thousands of demonstrators angered over the burning of a Koran in Florida mobbed offices of the United Nations in northern Afghanistan on Friday, overrunning the compound and killing at least seven foreign staff workers, according to Afghan officials.

There were conflicting reports on the total number of people killed and whether two of the victims had been beheaded. Five Afghans were also reported killed.

The incident began when thousands of protesters poured out of the Blue Mosque in Mazar-i-Sharif after Friday prayers and attacked the nearby headquarters of the United Nations, according to Lal Mohammad Ahmadzai, spokesman for Gen. Daoud Daoud, the Afghan National Police commander for northern Afghanistan.

After disarming or shooting the United Nations compound’s guards, the crowd surged inside. Mr. Ahmadzai said that eight of the foreign staff workers, whose nationalities were not known immediately, were killed by gunfire, and that two others were captured by the mob and beheaded. Other reports said that the operations center was burned down as well.

The governor of Balkh Province, Atta Mohammad Noor, said that seven United Nations employees were killed in all, five Nepali security guards and two European international staff, one of them a woman. He said earlier reports of beheadings were unfounded; all of the victims were shot.

The crowd, which he estimated at 20,000, overwhelmed police forces and the United Nations security guards, and the weapons they used in the attack may have been those they seized from the United Nations guards, he said. He claimed that some insurgents disguised as demonstrators had used the protest as a pretext to attack the United Nations.

Mr. Ahmadzai, the police spokesman, said the demonstrators were angry about the burning of the Koran at the church of Pastor Terry Jones on Mar. 20. Mr. Jones had caused an international uproar by threatening to burn the Koran last year on the anniversary of the Sept. 11 attacks, and demonstrations at the time led to deaths throughout Afghanistan, but on a small scale. Mr. Jones subsequently had publicly promised not to burn a Koran, but then presided over a mock trial and the burning of the Koran at his small fringe church in Gainesville, Fla.

Fran Ingram, an assistant at the Dove World Outreach Center, in Gainesville, Fla., said that the church had burned the Koran after a ceremony on March 20.

“We put the Koran on trial and we did burn it,” she said. Ms. Ingram said she and other church members were no more concerned about their safety than before the burning and the killings of the United Nations workers in Afghanistan. “We have a huge stack of death threats,” she said. “We take precautions. I have a handgun. A lot of us have concealed weapons permits. We’re a small church and we don’t have money to hire security.”

After news of the attack, Mr. Jones, released a statement expressing no regret for the Koran burning. He called the attack on the compound “a very tragic and criminal action” and called on the United States and the United Nations to take action. “The time has come to hold Islam accountable,” he said.

How about holding you responsible, Mr. Jones? You may not be responsible for these deaths, but our actions have done nothing but needlessly inflame passions. I hope you’re happy with yourself.