UCLA Political Science Professor Lynn Vavreck takes a look at the recent polling and sees undecided voters starting to break for the President:

If you believe the conventional wisdom about elections, the pivotal moments in presidential campaigns come in the last 50 days or so. The only problem with this claim is that by the time Ronald Reagan chortled and said, ”There you go again” to Jimmy Carter, or Michael Dukakis hopped in that tank and ground the gears, nearly all of the people who would turn out to vote in November had long since made up their minds. So how pivotal can these moments be?

In a December 2011 YouGov poll for the Cooperative Campaign Analysis Project, 94 percent of those polled had already made up their minds about whom to support in a Mitt Romney-Barack Obama contest. Got that? Before the Republican primaries even began, before Romney was even the nominee, only 6 percent of voters were undecided.

YouGov interviewed nearly 44,000 people in December, after which my collaborator, John Sides, and I interviewed 1,000 people from the original set every week beginning Jan. 1. (We’ll keep it up through Election Day.) Thirty-seven weeks into the year, and with only 47 days left until Nov. 6, how many of those initially undecided voters are still up in the air? How do the previously undecided voters choose sides? And do people ever change their minds during the campaign once they’ve made a choice?

This chart summarizes what they found: 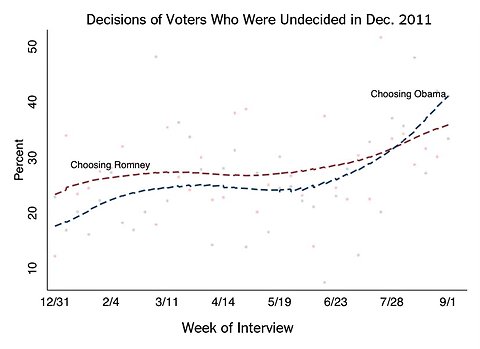 More interestingly, though, are the findings about people who changed their minds over the course of these interviews:

Interestingly, Romney is disproportionately losing women to Obama. Among those who are moving away from Romney and switching to Obama, 62 percent are women (47 percent of Romney’s initial voters were women). To make this clear, let’s say you are a woman who said you were going to vote for Romney when we asked you in December: You are twice as likely to change your mind and switch candidates (when we re-interview you in 2012) compared with women who initially chose Obama. Although to be fair, very few women are switching sides at all (4 percent leave Romney and 2 percent leave Obama).

Perhaps most interesting are those voters who thought the economy had stayed the same throughout 2011: Obama pockets 4 percent of Romney’s voters who evaluate the economy this way, while Romney pilfers only 2 percent of Obama’s voters with this opinion.

If this is true, it would explain a good deal of the movement we’ve seen in recent polls, and it would be yet another indication that things have been going very well for the President over the past month.