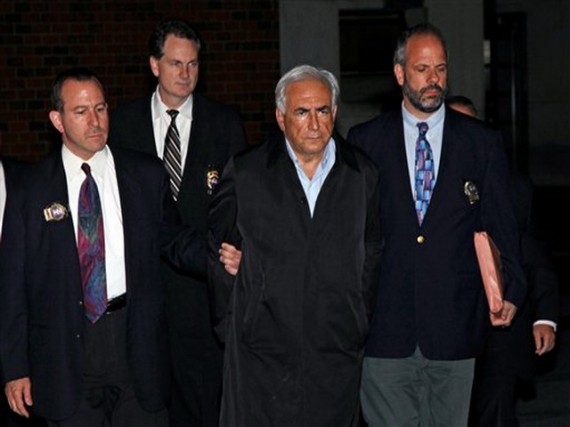 It’s been more than six months former IMF head Dominique Strauss-Kahn was taken off a Paris-bound plane at JFK airport and arrested for allegedly raping a hotel maid, and just a few months since the charges against him were dropped after his accuser’s story began to fall apart due to her own lack of credibility. Now, investigative reporters Edward Jay Epstein is out with a report in The New York Review of Books that, to say the least, raises many questions about what the heck really happened that day in May, 2011 in the Presidential Suite at the Sofitel. The entire article is worth a read, but Linette Lopez does a good job of summarizing the major discrepancies that Epstein points out based on his review of police and hotel records

That last part of Epstein’s hypothesis seems to be a bit of a stretch to me. The general idea seems to be that Strauss-Kahn had already been made aware that at least one of his cell phones and his iPad may have been compromised by, well, someone and was apparently intending to have both devices tested by a computer security firm once he returned to Paris. As Epstein relates it, DSK had been told that morning by a woman who had been a researcher at the headquarters of Nicolas Sarkozy’s political party that an email that DSK had sent to his wife had been read and passed around at party headquarters recently, suggesting that either the phone or his iPad might be compromised. From there, he goes to the alleged links between Sarkozy and the corporate owner of the hotel and then, he relates this:

By the time Sheehan was called by the hotel at 1:03 PM, Diallo was seated on a bench in the hotel’s ground floor service area, just off the service entrance on 45th Street. Behind her was a “Dutch door,” with the upper half opened, that led to the hotel’s security office. Surveillance camera footage shows her entering the area with a tall unidentified man at 12:52 PM. She remains there until 2:05 PM. At 12:56, she is joined there by Brian Yearwood, the large, heavy-set man who is the hotel’s chief engineer. Yearwood had just come down from the presidential suite on the twenty-eighth floor, which he had entered at 12:51, according to the key records. Yearwood remained close to Diallo as she spoke to Adrian Branch, the security chief for the hotel, who remained behind the half-shut door of the security office. She can be seen gesturing with her hands for about four minutes, pointing to different parts of her body over and over again, suggesting she was telling and retelling her story.

At 1:28, Sheehan, still on the way to the hotel, sent a text message to Yearwood. And then another text message to an unidentified recipient at 1:30. At 1:31—one hour after Diallo had first told a supervisor that she had been assaulted by the client in the presidential suite—Adrian Branch placed a 911 call to the police. Less than two minutes later, the footage from the two surveillance cameras shows Yearwood and an unidentified man walking from the security office to an adjacent area. This is the same unidentified man who had accompanied Diallo to the security office at 12:52 PM. There, the two men high-five each other, clap their hands, and do what looks like an extraordinary dance of celebration that lasts for three minutes. They are then shown standing by the service door leading to 45th Street—apparently waiting for the police to arrive—where they are joined at 2:04 PM by Florian Schutz, the hotel manager.

All of this is, apparently, on hotel security video. It is, to say the least, odd behavior to see a hotel employee(s) high-fiving and seemingly celebrating given what was happening that day. Of course, the “celebration” could have been something else. It could be they were happy with the outcome of the previous night’s Yankees or Mets game, or the NBA playoffs that were going on at the time. Epstein would want us to draw the conclusion, obviously, that the men were involved somehow in a set up against DSK and that they were celebrating how well the plan had gone off so far. But even that doesn’t necessarily make sense. Even if there was a conspiracy, it still wasn’t clear that the NYPD would be convinced enough to pursue the case, or that they’d be able to get to DSK before he left the country. Engaging in that kind of activity, in full view of cameras and the public, doesn’t even make sense in the context of a conspiracy against DSK.

Nonetheless, Epstein does raise a lot of interesting questions. The question of what ever happened to DSK’s Blackberry is an interesting one, for example. It certainly wasn’t left behind in his hotel room because it would’ve been found in the police search. DSK’s daughter wasn’t able to find it when she went back to the restaurant she had just dined at with her father to look for it at his request. Records apparently indicate that the phone’s locator circuitry was disabled sometime around 12:51pm 0n the day of this incident, but that’s only part of the mystery:

While DSK believed he had left it in the Sofitel, the records obtained from BlackBerry show that the missing phone’s GPS circuitry was disabled at 12:51. This stopped the phone from sending out signals identifying its location. Apart from the possibility of an accident, for a phone to be disabled in this way, according to a forensic expert, required technical knowledge about how the BlackBerry worked.

From electronic information that became available to investigators in November 2011, it appears the phone never left the Sofitel. If it was innocently lost, whoever found it never used it, raising the question of by whom and why it was disabled at 12:51. In any case, its absence made it impossible for DSK to check—as he had planned to do—to see if it had been compromised. Nor was it possible to verify from the phone itself the report he received on May 14 that his messages were being intercepted. So we cannot confirm the warning to DSK that he was under surveillance on that disastrous day.

And then there’s Room 2820, just down the hall from the Presidential Suite. As noted above, the maid apparently entered and exited that room several times before going to the suite, and then again after the alleged incident. The hotel was aware of this but neither they nor the maid told this to the police when they arrived, meaning that the room was not declared part of the crime scene and was never searched and processed. The hotel still won’t say if anyone was staying in that room at the time, or who they were if there was.  All of this would seem to be relevant information.

The only thing we know for sure is that there was some kind of sexual encounter in the Presidential Suite of the Sofitel on May 14, 2011. It didn’t last very long, but it did happen, the forensic evidence confirms it and Strauss-Kahn’s lawyers have never denied that there was a sexual encounter. The question is whether there was consent or force. As far as the Manhattan District Attorney was concerned, there wasn’t sufficient evidence to prove force beyond a reasonable doubt. and these new revelations just put the maid’s story further into doubt. There is a civil suit pending, though, and DSK’s lawyers will have the authority at some point to subpoena records from the hotel that could cast further light on some of what Epstein reports here. That could be interesting, to say the least.

I don’t think any of us know what the real story is. I tend not to buy into conspiracy theories for the simple reason that there’s usually a much simpler explanation,  but after reading Epstein’s report, the whole thing just seems really dammed odd now.

FILED UNDER: Crime, Law and the Courts, Dominique Strauss-Kahn