A Path To A Brokered Convention?

One analyst sees a way that the current GOP race could indeed lead to a brokered convention. 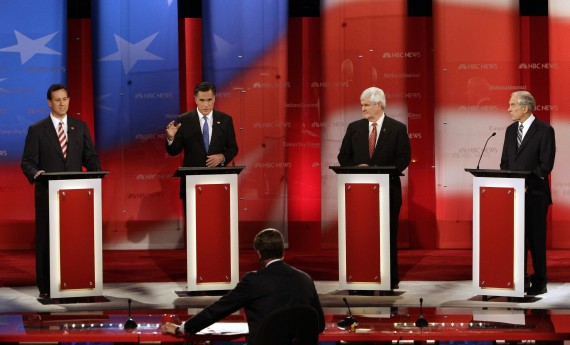 James Joyner, Steven Taylor, and myself have all written here over the past months of the Republican race for the Presidency about the utter ridiculousness of the idea that the race would end in a brokered convention, something Republicans have not seen since Tom Dewey was named the GOP nominee for the second time in a row in 1948 Even with the upheval we’ve seen in the race over the past month, and the trouble that Mitt Romney continues to have in closing the deal with conservatives, those conclusions still strike me as valid. Sean Trende, the Senior Elections Analyst at RealClearPolitics, however, says that for the first time you can see a viable path that the race could take that would lead to the ultimate political pundits fantasy:

My assumption — and the assumption of many — was that the GOP fight would eventually degenerate into an ideological battle between the very conservative and somewhat conservative/moderate wings of the party, with Romney on one side and a single alternative on the other. Unless there was a late entrant or Ron Paul caught fire in the caucus states, someone was virtually assured of claiming the requisite number of delegates in that scenario.

But for the first time, the two way faceoff doesn’t seem inevitable, and a viable path to a brokered convention is beginning to emerge. Let’s start with something else I overlooked. T0he GOP does have super-delegates of a sort, in the form of the 63 RNC members. They aren’t as numerous as they are in the Democratic Party, but they are still there. While many of them have already declared allegiance to one candidate or another, those commitments can evaporate quickly, as Hillary Clinton learned to her sorrow in 2008.

But more importantly, demographic and geographic splits are beginning to surface in the GOP that resemble the splits in the Democratic Party in 2008. That year, Hillary Clinton laid claim to working-class whites and Latino voters, while Barack Obama laid claim to college-educated whites and African-Americans. This divide continued throughout the primary, right up to the last day of voting.

Here’s how Trende sees the split developing in the GOP race:

Romney has done well in New Hampshire and south Florida; the latter is basically the North transplanted to the South. This suggests continued strength in the Northeast. He’s also done well in the Mountain West: Nevada was in his camp, as was a large portion of the Western Slope of Colorado. Note also the handful of counties in southern Colorado that went for Romney; they are heavily Mexican-American, and Romney has run well with Latino voters in the GOP contests thus far.

Next, Gingrich. As I noted a few days ago, there is continued resistance to Mitt Romney in the GOP among evangelicals. These voters are concentrated largely, but not exclusively, in the South. And as we see, the former House speaker ran well in South Carolina as well as in northern Florida. This caused many to conclude that Gingrich was on the verge of emerging as the definitive not-Romney.

But now we have to consider that Santorum has won Iowa and Minnesota in the Midwest, and won Colorado largely on the strength of his showing in eastern Colorado (which is basically the Great Plains). He also won Missouri — which is culturally more southern than Midwestern — but Gingrich wasn’t on the ballot there.  For now at least, he is the “anti-Romney” in the Midwest.

If this split continues — Romney in the West and Northeast, Gingrich in the South, and Santorum in the Midwest — we could easily find ourselves in a scenario where no candidate crosses the 1,144-delegate threshold by the time voting ends. Consider this: Right now, Romney barely has a majority of the delegates. If Gingrich successfully contests the winner-takes-all allocation in the Florida primary (based on the RNC’s rule against such a format before April), no one would have a majority of the delegates as of today.

It sounds plausible, but then a theory based on assuming that things will continue in the future the way they have in the past always sounds plausible, until the race takes a different path and all your assumptions get blown out of the water. There’s another way of looking at the race. Romney has done well in states where he has both an organizational advantage on the ground (which he can get almost anywhere at this point) and where his campaign and his supporting SuperPAC have run a focused attack on his primary opponent. That’s how he won in Florida, New Hampshire, Nevada, and to some extent the reason he managed to beat expectations in Iowa. In South Carolina, by contrast, the negative campaigning came from the Gingrich campaign, and in Tuesdays largely inconsequential (to the delegate race) caucuses and primaries. There are already signs that the Romney campaign is not going to make that same mistake, concerning either Gingrich or Santorum from now on. What Trende sees as a regional split may actually just be a coincidence based on the way the race has played out so far. Does he really think that Romney is going to sit back and roll over at the end of the month in Arizona or Michigan, or at the beginning of March in Super Tuesday? We’ve already seen how a focused negative campaign can change the course of the race, and there’s no reason to believe it won’t happen again.

Nonetheless, let’s pretend for a moment that Trende’s analysis is correct, how might this regional split play itself out? Here’s one scenario:

We will find out how viable0 this path is in the next few weeks. In the lead-up to Super Tuesday, we’ll probably see Romney win Arizona, Michigan and Maine. Arizona and Maine are in his demographic wheelhouse, while he is a native Michigander and his father was governor of the state. Washington is a coastal state, where Romney’s strength hasn’t been tested, so it is up in the air.

Super Tuesday will likely be tougher for him. Four of the five largest states — Virginia, Tennessee, Oklahoma and Georgia — are Southern (or in Oklahoma’s case, culturally Southern). Romney will likely win Virginia by default, but he will probably fare poorly in the remaining three. If Gingrich can maintain his strength in the South, he will likely win them.

On the other hand, Romney will probably do well in Massachusetts, Idaho and Vermont. Santorum seems well-positioned to win North Dakota.

So the viability of a three-way split probably comes down to Ohio, which has a fair number of evangelicals, though not to the degree that Tennessee, Oklahoma and Georgia do. Santorum has some strengths he can draw on in the Buckeye State, as his blue-collar message could play well even among Republicans there. If he wins, it means that we probably do have a deeply divided GOP, with Gingrich taking the anti-Romney vote in the South, and Santorum taking the anti-Romney vote in the Midwest.

Of course all of this assumes that Gingrich and/or Santorum have the kind of campaign organization, and the money, that it would take to compete in a state like Ohio, something that is by no means certain. By all rights, Ohio seems like the find of state where Romney’s organizational and money advantages would play out to his advantage quite nicely. As for the races in the Southern states (except for Virginia, of course), with Gingrich and Santorum both in the race one could easily see the conservative vote in one or more of those states staying divided enough that neither one is a clear winner and, since all states holding primaries prior to April 1st are required to award delegates proportionally, Romney will add to his delegate lead even if he comes in second, or third. Under that scenario, the prospect of either Gingrich or Romney gaining sufficient delegate support to stalemate the race all the way to the convention seems pretty low.

Is it possible that Trende’s scenario could play itself out this way so that we come to the California primary in June with nobody either having a delegate majority or the likelihood of obtaining one? Yea, it’s possible, it just doesn’t seem very likely. Despite all his flaws, and despite the advantages that SuperPAC give to candidates like Gingrich and Santorum, both of whom likely would have fizzled out long ago without them, the only candidate in this race with a truly Presidential campaign remains Mitt Romney, and there’s still every reason to believe that he’ll have the nomination wrapped up long before Republicans gather in Tampa for their convention.