Bowe Bergdahl Trial Delayed Until 2017, But Donald Trump Could Wreck The Entire Case

Bowe Bergdahl's Court Martial has been delayed until 2017, which raises the possibility that comments by Donald Trump could result in Bergdahl getting off scot-free. 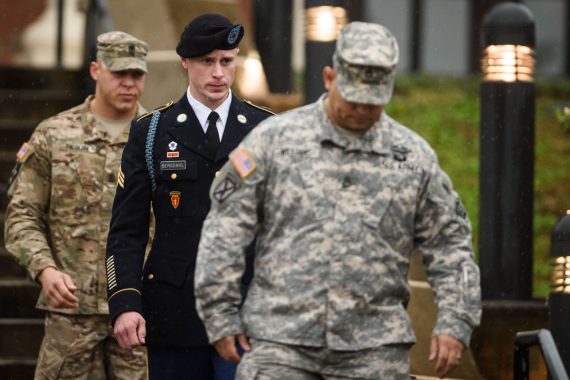 The court martial of Bowe Bergdahl on desertion and related charges has been delayed until after the Presidential election, raising the possibility that the trial could become further complicated if Donald Trump manages to win the election:

The start of the trial of Army Sgt. Bowe Bergdahl, who faces desertion and misbehavior charges for abandoning his post in Afghanistan, has been postponed until next year to give his defense team time to sift though thousands of pages of secret documents.

The new date, Feb. 6, which may still change as a result of scheduling conflicts, was set at a brief hearing Tuesday at Fort Bragg in North Carolina, the Army said in a statement. The initial trial date had been set for Aug. 8.

The case has grown more complex as prosecutors and defense attorneys have grappled with the compilation of 1.5 million pages of documents in connection with the investigation into the capture and detention of Bergdahl.

At the hearing, defense attorneys and prosecutors met with the judge, Col. Jeffery Nance, to discuss potential trial dates and legal motions under consideration. The hearing lasted 35 minutes.

The delay means, of course, that Bergdahl will not face trial on the charges against him until after the next President has taken office. If that President his Donald Trump, there will be a voluminous record of the President having spoken out regarding his beliefs about the case against Bergdahl and what should happen to him. As early as August of last year, just two months after he entered the race, Trump was calling Bergdahl a “dirty, rotten traitor” and in October Trump referred to him as a “No good traitor” who would have been executed thirty years ago. While Trump hasn’t brought the subject of Bergdahl up on the campaign trial recently, he repeated the treason charges, and the conclusion that Bergdahl was guilty of the charges against him, several times during the race for the Republican nomination. Citing Trump’s history of comments about the case, Bergdahl’s attorneys contacted Trump’s campaign in March seeking to depose Trump regarding his comments. I could not find any definitive word via a Google search, but it does not appear that any such deposition has taken place or that Trump has responded publicly or privately in any way regarding the deposition request, although one suspects he will resist any efforts to be put under oath regarding this matter. By contrast, the only comments that Hillary Clinton appears to have made regarding the Bergdahl matter appear to be a passage in her book Hard Choices that appears to suggest that she was doubtful about negotiating directly with the Taliban as well as subsequent comments during her book tour where she said that the fact that Bergdahl might have deserted his until does not mean that the United States should not have tried to bring him home in the manner it did.

The fact that this case will not go to trial until the next President is in office means, of course, that there’s at least a possibility that Donald Trump could be President when the military is seeking to prosecute Bergdahl. If that’s the case, then Trump’s previous comments about Bergdahl’s guilt and an opinion about an appropriate sentence could become the basis for a defense that could get the case dismissed entirely. The defense would fall under a concept called “undue command influence” that is defined in Article 37 of the Uniform Code of Military Justice:

The basic concept here is that superior officers should refrain from commenting on the merits or lack thereof of criminal cases pending under the UCMJ and that, if they do, the danger that their comments may be unduly influencing the opinions of the Judge and Jury in a relevant Court Martial could result in the charges in those cases being dismissed due to the prejudicial impact on a Defendant’s right to a fair trial. In the last several years, this defense has been successfully used to result in the dismissal of charges in outstanding criminal cases under the UCMJ. In June 2014, for example, attorneys for a Marine on trial for sexual assault successfully argued that comments made by the Commandant of the Marine Corps regarding sexual assault cases in his branch of the military were sufficiently specific to constitute the kind of undue influence that ought to result in dismissal of the underlying charges. As James Joyner noted at the time, while the Commandant’s comments were not regarding the specific facts of the case against the Marine, they were sufficiently specific to constitute an admonishment to members of the jury that they should start with the assumption that claims of sexual assault are true rather than a presumption of innocence as required by law. Just a year earlier in a separate case, charges against two Navy Defendants were dismissed because of similarly generalized comments by President Obama, the Secretary of Defense, the Chief of Naval Operations, and several others below them in the chain in command earlier in 2013.

While Trump’s comments were made at a time when he was a civilian candidate for President rather than someone within the chain of command, that doesn’t appear to mean that they could not be used as the basis for a claim of undue command influence if he is elected President. For one thing, unlike the comments that led to the dismissal of the sexual assault cases noted above, these were very specific comments about a specific case. If generalized comments about sexual assault were sufficient to constitute undue influence in the sexual assault cases, it’s at least arguable that the specific comments by a newly elected and inaugurated President regarding what he thinks should happen to Bergdahl specifically could arguably be said to constitute an undue influence on the jury hearing his case. At the very least, the fact that Bergdahl’s attorneys have already sought to depose Trump would seem to suggest that they are already aware of the potential presented for raising the defense and that we can at least expect the issue to be raised at trial as well as at any appeal in Bergdahl is convicted. In other words, Donald Trump spouting his opinion on this subject could result in Bergdahl getting off scot-free.