Two years of Republican control of the Legislative and Executive Branches has put us back on a path toward $1 trillion budget deficits. 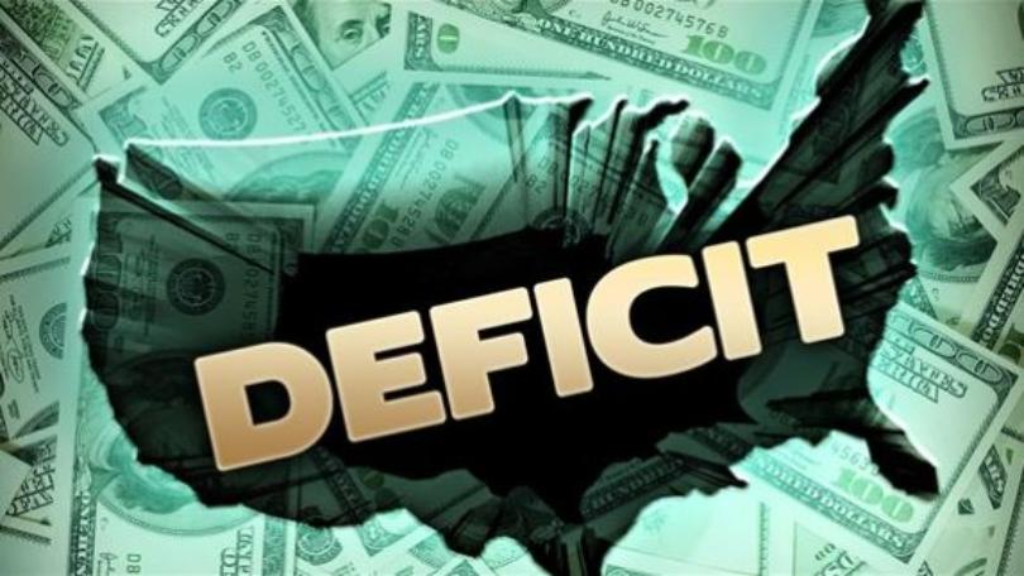 The Federal Budget Deficit continued to rise during the final month of complete Republican control of Washington, and it’s on track to hit $1 trillion by the end of the current Fiscal Year:

WASHINGTON — The federal budget deficit continued to rise in the first quarter of fiscal 2019 and is on pace to top $1 trillion for the year, as President Trump’s signature tax cuts continue to reduce corporate tax revenue, data released Tuesday shows.

The monthly numbers from the Congressional Budget Office also show an increase in spending on federal debt as rising interest rates drive up the cost of the government’s borrowing.

The widening deficit comes despite a booming economy and a low unemployment rate that would typically help fill the government’s coffers. Federal spending outpaced revenue by $317 billion over the first three months of the fiscal year, which began in October, the budget office reported. That was 41 percent higher than the same period a year ago, or 17 percent after factoring in payment shifts that made the fiscal 2018 first-quarter deficit appear smaller than it actually was.

The report did show one area of increasing revenue — from Mr. Trump’s sweeping tariffs. Revenue from levies on imported steel, aluminum and Chinese goods were up $8 billion from the same quarter a year ago, an 83 percent increase. That increase, however, is nowhere close to the levels needed to support Mr. Trump’s frequent claims that his tariffs will help pay down the national debt.

This fiscal year is the first to fully incorporate the reduced tax rates that Mr. Trump signed into law in late 2017, including cuts for individuals and closely held businesses and steep reductions for corporations. It continued a trend from the final three quarters of 2018, after the tax cuts took effect: falling tax receipts, at a time of relatively strong economic growth — a combination that shows the tax cuts are achieving nothing close to the administration’s promise that they would pay for themselves.

“It is entirely predictable and utterly depressing,” said Maya MacGuineas, the president of the Committee for a Responsible Federal Budget, which advocates deficit reduction. “At a time when we should be working to keep the strong economy going and bring our debt down, our lawmakers seem unwilling to pay for anything and they just keep adding to the debt. All signs point to that it will continue to get worse before it gets better.”

This news shouldn’t come as a surprise, of course. We’ve largely been on this course ever since Republicans took control of the Executive and Legislative Branches after the 2016 election. Among the consequences of that power was the passage in December of 2017 of a tax “reform” package that, in addition to apparently reducing the amount of revenue coming into the Federal Government notwithstanding the predictions to the contrary that Republicans made at the time, is projected to add roughly $1.5 trillion to the national debt over the course of the next decade. This was quickly followed by the passage of a budget by a Republican Congres and White House that made clear that we were headed for a return of the era of trillion dollar budget deficits. This would not be the first time we saw deficits that high, of course. We reached similar levels during the early years of the Obama Administration, something that led Republicans to issue their usual calls of fiscal irresponsibility. The difference between then and now, though, is that those Obama Era deficits were primarily the result of the fact that we were still dealing with the impact of the Great Recession and that the recovery which began in 2009 was still very much in its infancy. This time, the record-setting deficits that we are likely to see for the foreseeable future are coming at a time when the economy continues to boom during what has become one of the longest economic recoveries in history, and that they come at a time when financial markets are becoming increasingly sensitive to higher levels of debt and interest rates. When the final budget deal was put forward in mid-February of last year, it included massive spending increases in almost every budget category and busted through the controls that had been put in place by the Budget Control Act of 2011, a controversial bill passed during one of the many fiscal showdowns between former President Obama and Congress that occurred after Republicans captured the House in 2010. As The New York Times noted at the time, this effectively means that Republicans have learned to love the deficits and debt they once claimed to abhor. In other words, the Republican Party, which had spent the Obama years railing about spending and deficits, had become the party of deficits and debt. By April of last year, the Congressional Budget Office had officially forecast that we’d be seeing trillion dollars deficits by the end of Fiscal Year 2019 and just a few months later, the national debt crossed a new benchmark and was north of $21 trillion.

While one might consider this hypocrisy on the part of a Republican Party that has preached the gospel of fiscal responsibility for years, the truth is that it’s entirely consistent with how the GOP has acted so many times in the past that it’s easy to lose count. For the most part, the supposed Republican fidelity to fiscal responsibility and their concern about rising Federal Budget deficits and the National Debt is something that has proven to be little more than a political slogan that was largely based on who controlled the White House. When former Presidents Bill Clinton and Barack Obama were in power, for example, Republicans argued that out of control spending and deficits were destined to drive up interest rates, cause the national debt to explode, and increase interest rates. They used these issues as political cudgels against the Democratic White House during both Administrations and, of course, as a way to appeal to voters and supporters. Riding this wave, the GOP was able take control of both Congress and, eventually, the White House, but then things suddenly changed.

Congratulations Republicans, this is what you voted for.