Can The GOP Deliver On Its Promise To Repeal ObamaCare? And What’s The Replacement?

The Republican strategy on health care in the wake of the Supreme Court's decision needs some tweaking. 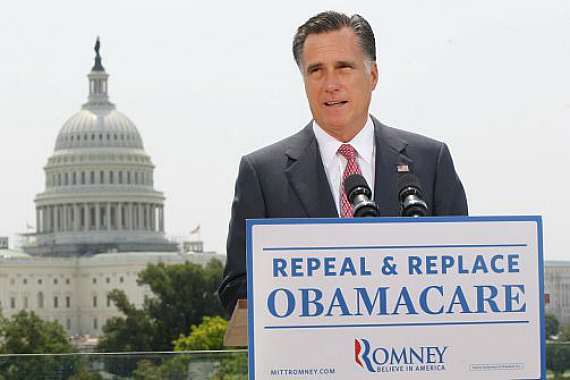 As I noted earlier, Mitt Romney responded to the Supreme Court’s decision on the Affordable Care Act by promising to repeal the law on his first day in office. In order to accomplish that of course, the GOP will have to overcome a number of hurdles that are by no means easy to achieve.

First, of course, they will have to win the Presidency and gain control of the Senate. As we’ve seen from recent polling at the national and state level, though, the race between President Obama and Mitt Romney is tight to say the very least. While I’m sure that we’ll be getting “flash” polls about the health care decision as soon as tomorrow it will take several weeks at least for the political impact of what the Supreme Court did today can be fully evaluated, and even then that will only be the initial impact. The ACA itself, as well as the Supreme Court, are likely to become larger issues in the election than they might have been otherwise, and it’s hard to see which side benefits the most from that fact. One can make an argument that upholding the ACA will energize the Republican base and the Tea Party and bring those independents who have been skeptical of the law from the beginning into Romney’s camp. At the same time, one can make a case, as Rick Moran does in this piece at PJ Media, that today’s Supreme Court decision is a major boost to President Obama’s re-election efforts.

As for the Senate, the fact that the current Democratic majority is so slim and that the majority of seats up for grabs this year are held by Democrats suggests that the GOP has a fair chance of grabbing control of the Senate. The only problem is that, at least based on the way the races at the Senate level seem to be going at the moment, it’s likely to be a very narrow majority. Looking at the most optimistic scenario for the GOP, my estimate is that we’re looking at a 53-47 GOP majority, the more realistic GOP scenario puts the majority at a razor thin 51-49. That’s nothing to sneeze at because it gives the party control of Committee assignments and the legislative agenda, but it presents a few problems for the GOP.

We’re all familiar with the Senate’s cloture rules and the 60-vote threshold that must be reached to even get to the point where there can be a vote on the merits. Obviously, with a majority of 53 or 51, the GOP would be nowhere near where it would need to be to invoke cloture on a repeal bill. Now, there are scenarios under which some pieces of legislation could make it through the Senate without being subjected to Cloture using the reconciliation process but this would not apply to all provisions of the Affordable Care Act and even an effort to merely repeal the penalty provisions of the individual mandate could be barred from reconciliation by the Byrd Rule depending on how the Senate Parliamentarian rules on the matter. At the very least there would be a huge battle between Republicans and Democrats over Senate rules in which a situation, at most the GOP may find that it would be unable to repeal any part of the ACA without 60 votes.

First, today’s Supreme Court decision will make it a lot harder to elect Mitt Romney. President Obama has just been handed a fearsome election weapon. 2012 is no longer exclusively a referendum on the president’s economic management. 2012 is now also a referendum on Mitt Romney’s healthcare plans. The president can now plausibly say that a vote for the Republicans is a vote to raise prescription drug costs on senior citizens and to empower insurance companies to deny coverage to children for pre-existing conditions. Those charges will hurt—and maybe hurt enough to sway the election.

Second, even if Republicans do win the White House and Senate in 2012, how much appetite will they then have for that 1-page repeal bill? Suddenly it will be their town halls filled with outraged senior citizens whose benefits are threatened; their incumbencies that will be threatened. Already we are hearing that some Republicans wish to retain the more popular elements of the Affordable Care Act (ACA). Which means the proposed 1-page bill will begin to grow.

Third, Mitt Romney has promised to grant states waivers from the obligations of the ACA. Not all states will ask for such waivers. Many will eagerly institute the ACA, which (let us not forget) includes large immediate grants of federal aid.

Fourth, Republicans will find the task of writing their “replace” law even more agonizing than the Democrats found original passage. The party has no internal consensus on what a replacement would look like. Worse, any replacement of the law’s popular elements will require financing. But where is that money to come from? New taxes are unacceptable. The proceeds of “closing loopholes” are already spoken for—that’s how President Romney has promised to finance his promise to cut the top rate of tax 28%. And he’s also promised to increase defense spending.

Fifth, the clock is ticking. President Obama passed the ACA in the second year of his administration. A President Romney will have to pass repeal in the first year of his, because the law goes into effect in 2014. By then, states will have to have their exchanges up and working. And states that have put themselves through that work will not be very eager to see Washington undo it. If replacement does not happen in the first 100 days, it won’t happen at all—that is, it won’t happen as a single measure, but rather will take the form of dozens of small incremental changes adopted episodically over the next 20 years.

All of these points are well taken, I believe. The fact that the Supreme Court has, after nearly two years in which many people were saying on a near daily basis that it was unconstitutional, but its imprimatur on the Affordable Care Act, it has placed a powerful political weapon in the hands of the President and his Democratic allies. As I said above, we don’t know today what impact this decision will have on public opinion, but there’s at least a possibility that it will cause some segment of the public to shift position. More importantly, though, as Frum raises in his last paragraph above, the Supreme Court’s decision today pulls away the last excuse that most anyone had to not prepare for the implementation of the law in less than two years. The closer we get to January 1st, 2014, the harder it will be to dismantle the structure that the law creates. Finally, American history since the New Deal Era shows us that repealing social welfare legislation is difficult if not impossible; it’s only happened once when a bipartisan coalition united to repeal a badly thought out Medicare prescription drug benefit program that had aroused considerable ire among the elderly population. For that reason alone, repealing something as massive as the PPACA, without offering a replacement, is not going to be easy at all.

Finally, even if the GOP does win the White House and the Senate in November, one has to wonder how eager they are going to be to make repealing the PPACA the central part of their first year in office. No matter how big an issue it becomes in the election, ObamaCare repeal is unlikely to become the most important issue for voters in November. The issues on the top of their list will be jobs and the economy just as they were in 2010. In fact, according to the 2010 Exit Polls, the issues of importance to the voters were as follows:

This was in an election year during which opposition to “ObamaCare” was a central part of the Republican campaign for Congress. Does anyone really think that health care, and specifically repeal of the PPACA, will be any more of a voter priority this year, especially in light of the state of the economy? More importantly, once they do get into office in January would Republican want to spend their time trying to repeal the health care law, or passing legislation that would help stimulate the economy and cut the budget deficit? These are open questions, I submit.

Of course, many on the right will respond by saying that repealing the PPACA is economy stimulus in and of itself because it removes burdens on small business. Even conceding this to be true, and I tend to agree with it, another massive burden on businesses is the rapidly increasing cost of health care. That also happens to be a huge part of the problems with the Federal Budget at the moment. What is the GOP going to propose to help bring those costs under control? I ask because there’s simply no rational argument in favor of returning to the pre March 2010 status quo. Unless we bring health care costs under control, the federal spending is going to continue to skyrocket and the deficit will continue to soar. Moreover, businesses will find it increasingly difficult to afford health insurance for their employees. So, even if you agree that ObamaCare is bad for business, you’ve got to come up with an alternative plan or we’re going to be dealing with the same problems we have today.

Mitt Romney stood today behind a placard that said “Repeal and Replace Obamacare,” but the repeal part won’t be easy at all and, so far, he hasn’t said a darn thing about the “replace” portion of that slogan. One would think he’ll need to fix that soon.