Absent something extraordinary, it's unlikely that the GOP will lose control of the House.

Charlie Cook writes this morning that, at least at the moment, there’s no indication that the House of Representatives is up for grabs:

One might have expected that two years after Republicans picked up 63 House seats—the biggest gain in a midterm election since 1938—Democrats would be on track to win back a boatload of those districts that the GOP didn’t have much business winning in the first place. But a little more than four months out from the election, the tides seem about as neutral as they can be. Both parties have surprisingly comparable levels of exposure, largely because of redistricting. The relatively calm surface of this year’s waters belies a lot of offsetting tumult and change underneath. But for House Republicans, who hold a 25-seat majority, a status quo election producing minimal net change would be good news.

At this point in the past three “wave” election cycles—the great Democratic years of 2006 and 2008 and the monumental GOP year of 2010—two things were true: First, one party had nearly all the momentum; every week a new strong candidate emerged or a new, surprising district came into play. Second, Tip O’Neill’s “all politics is local” adage had left the building. Voters focused almost entirely on sending a national message, opposing President Bush in 2006 and 2008, and then President Obama in 2010. It didn’t matter that Democrat Alan Grayson (FL-08) had attended CodePink rallies before running in 2008, or that Republican Joe Walsh (IL-08) was railing against Washington for spending beyond its means, while a bank foreclosed on his condo in 2009. They both won. Likewise, it didn’t matter that Republican Christopher Shays (CT-04) had worked closely with Democrats on campaign finance reform or that Democrat Gene Taylor (MS-04) had voted to the right of many (if not most, at one point) Republicans in the House. They both lost.

Were this election not immediately following a largely GOP-controlled round of redistricting, Democrats might have far fewer vulnerabilities of their own and many more appetizing Republican targets. But after Kansas became the last state to finalize its congressional lines earlier this month, the distribution of new districts told a scary before-and-after tale for Democrats. Using The Cook Political Report‘s Partisan Voter Index as a measuring stick, our preliminary analysis indicates that the number of strongly Democratic districts—those with a score of D+5 or greater at the presidential level—decreased from 144 before redistricting to 136 afterward. The number of strongly Republican districts—those with a score of R+5 or greater—increased from 175 to 183. When one party starts out with 47 more very strong districts than the other, the numbers suggest that the fix is in for any election featuring a fairly neutral environment. Republicans would need to mess up pretty badly to lose their House majority in the near future.

At the moment, Cook says, his own analysis doesn’t indicate that there’s much of an opportunity for House Democrats to grab a significant number of seats absent such a series of mistakes by the GOP:

An analysis of the race-by-race landscape tracks the partisan data pretty closely. The Cook Political Report rates 211 House seats as solid or likely Republican, compared with 171 as solid or likely Democratic. If the 24 toss-up races split evenly between the parties, Democrats would score a net gain of just a single seat. Even if Democrats held everything in their solid, likely, and lean columns and also won every toss-up, they would still need to take two-thirds (12 of 18) of the districts rated lean Republican to win a majority. That’s a pretty unlikely scenario, absent a strong wind at their backs.

The Generic Congressional Ballot numbers largely support Cook’s hypothesis. As you can see from this chart at RealClearPolitics, while there has been some fluctuation since the start of the year, the numbers have been relatively constant and moved mostly in tandem, not exactly an indication that either party has a significant amount of momentum: 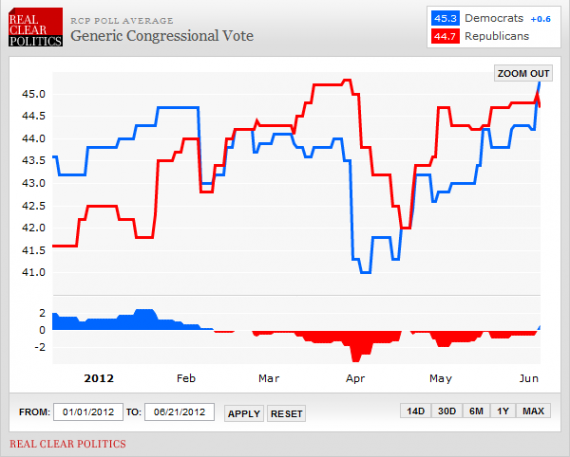 Numbers like this, combined with the advantages that the GOP has both due to incumbency and redistricting, make it difficult to see a path by which the Democrats could bring about a fourth consecutive Congressional wave election. Indeed, it was rare enough that we had three such elections starting in 2006 given that modern history has seen House majorities that are stable for at least more than four years. It’s also worth noting that many of the Republican gains in 2010 occurred in Districts represented by “Blue Dog” Democrats, where the incumbent managed to get re-elected by being more reflective of the conservatism of the electorate than the general direction of the Democratic Party. Absent a shift in the direction of the Democratic Party itself, it was rather inevitable that most of these districts would start drifting into Republican hands at some point. The fact that it happened in the Congressional Election right before redistricting, and that it coincided with a significant shift in control of state legislatures to the GOP, meant that the GOP was likely able to “lock-in” many of those districts for the foreseeable future by redrawing them to be even more Republican than they had been previously. That should help many of the Republicans elected in 2010 hold on to their seats safely in 2012 and it’s generally been the case that a Congressman that gets past their first re-election bid is going to have a much easier time getting re-elected in the future.

So, absent some massive shift in public opinion, which in our highly polarized political culture seems unlikely, I would estimate at this point that the GOP is going to be able to safely hold on to the House in November. Possibly, there will be a handful of seats lost here or there, but they may end up getting balanced out by seats gained due to redistricting. What that means, of course, is that, at the very least, divided government is an inevitability in 2013.

FILED UNDER: Campaign 2012, Congress, US Politics