Chris Christie Grabs Endorsement Of New Hampshire Union Leader, But Will It Matter?

Chris Christie has gotten the endorsement of the biggest newspaper in New Hampshire, but it's not clear that this will have any impact on the race. 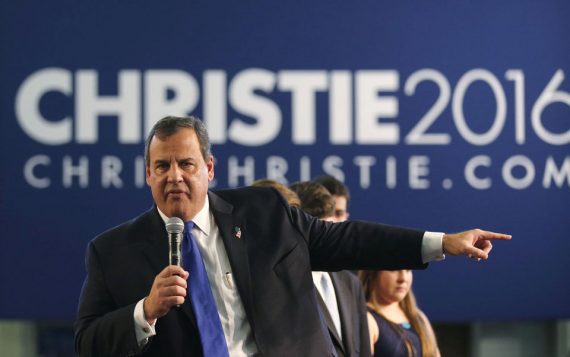 New Jersey Governor Chris Christie has grabbed what has in the past been a key endorsement in New Hampshire, but it’s unclear just how much of an impact it will have on the race:

Chris Christie’s long-shot presidential campaign got a lift on Saturday night with the endorsement of The New Hampshire Union Leader, an influential paper in the state where the New Jersey governor has camped out in the hopes of catching fire.

The newspaper’s endorsement, coming 10 weeks before the first-in-the-nation primary, arrived earlier than it had in the past two election cycles involving crowded Republican primary fields.

The endorsement, however, was framed in terms of the changed landscape of the 2016 presidential race in the wake of the Nov. 13 terrorist attacks in Paris, the aftermath of which Mr. Christie has pointed to as a moment for which his skill set is perfectly matched. And it is the strongest suggestion of the vibrancy of a candidate who has fought for survival in a sprawling field, after the so-called Bridgegate scandal in New Jersey dampened his national prospects and hindered his standing in the polls and in fund-raising.

“Mr. Christie is right for these dangerous times,” wrote Joseph W. McQuaid, the paper’s publisher, in the endorsement editorial. At another point, he wrote: “As a U.S. attorney and then a big-state governor, he is the one candidate who has the range and type of experience the nation desperately needs.”

The support for Mr. Christie is a blow to two other candidates vying for establishment backing and casting themselves as the grown-ups in a field of first-term senators and political neophytes: Jeb Bush, the former governor of Florida, and Gov. John Kasich of Ohio. For both men, New Hampshire is seen by many as a must-win.

Mr. McQuaid seemed eager to recast the terms of the debate, taking veiled swipes in his editorial at some of the other candidates.

“We don’t need another fast-talking, well-meaning freshman U.S. senator trying to run the government,” he wrote, in a reference that seemed largely aimed at Senator Marco Rubio of Florida, but which could also apply to Senators Ted Cruz of Texas and Rand Paul of Kentucky. “We are still seeing the disastrous effects of the last such choice.”

As for Ben Carson and Carly Fiorina, the former Hewlett-Packard executive, he wrote, again without naming anyone, “We don’t need as president some well-meaning person from the private sector who has no public experience.”

In a line that seemed aimed squarely at Donald J. Trump, who has been trying for a week to justify his claim that he watched “thousands and thousands” of people cheering in New Jersey on Sept. 11, 2001, as the World Trade Center was attacked by terrorists, Mr. McQuaid wrote: “Other candidates have gained public and media attention by speaking bluntly. But it’s important when you are telling it like it is to actually know what you are talking about. Gov. Christie knows what he is saying because he has experienced it. And unlike some others, he believes in what he says because he has a strong set of conservative values.”

From the endorsement editorial:

We don’t need another fast-talking, well-meaning freshman U.S. senator trying to run the government. We are still seeing the disastrous effects of the last such choice.

Chris Christie is a solid, pro-life conservative who has managed to govern in liberal New Jersey, face down the big public unions, and win a second term. Gov. Christie can work across the aisle, but he won’t get rolled by the bureaucrats. We don’t need as President some well-meaning person from the private sector who has no public experience.

Gov. Christie is right for these dangerous times. He has prosecuted terrorists and dealt admirably with major disasters. But the one reason he may be best-suited to lead during these times is because he tells it like it is and isn’t shy about it.

Other candidates have gained public and media attention by speaking bluntly. But it’s important when you are telling it like it is to actually know what you are talking about. Gov. Christie knows what he is saying because he has experienced it. And unlike some others, he believes in what he says because he has a strong set of conservative values.

For many years, the Union Leader endorsement is one that Republican candidates for President have heavily sought due in large part to the perception that the newspaper, which is both the state’s largest and known for being politically conservative, had at least some influence over Republicans in the Granite State, but it has never been clear that this is the case. In 1976, the paper endorsed Ronald Reagan, who lost the primary to President Gerald Ford, although he did go on to pose a strong challenge to the incumbent all the way to the conention In 1980, Reagan received the paper’s endorsement, and he of course went on to win the primary, the nomination, and the Presidency. In 1988, they endorsed former Delaware GovernorPete duPont, who promptly came in 5th place in the primary. In 1992 and 1996, the paper raised eyebrows by endorsing firebrand political pundit Pat Buchanan, who lost the 1992 primary to President George H.W. Bush and narrowly beat Kansas Senator, and eventual Republican nominee Bob Dole in 1996. In 2000, businessman Steve Forbes received the paper’s nominee and game in third in the primary. The Union Leader had better luck in picking a winner in 2008 when it endorsed Senator John McCain, but the fact that McCain had won the state in 2000 in a closely fought race with George W. Bush suggests that it was McCain’s ties to the state rather than the endorsement that helped him defeat Mitt Romney in 2008. Finally, in 2012 the paper endorsed Newt Gingrich, who ended up coming in fifth place in the Granite State. Given all of this, it’s unclear that the much-vaunted importance of this endorsement has ever really meant as much as people thought that it did, or that it will mean much for Christie going forward.

Looking at the numbers, there’s certainly not much reason to believe that Christie is on the verge of a surge, whether or not it’s related to a newspaper endorsement in New Hampshire. Nationally, Christie is currently averaging 2.7% according to RealClearPolitics, putting him all the way back tied for 8th place with Ohio Governor John Kasich. In Iowa, where he admittedly was never expected to do well to begin with given the nature of the Hawkeye State’s Republican electorate, he’s in ninth place with an average of 2.3% in the polls. In South Carolina, he’s all the way back in eleventh place with a 1.0% average that puts him behind all but the candidates barely getting 0.1% in the polls. Christie isn’t doing much better in Florida, where he’s back in ninth place with a 1.5% average. New Hampshire is the only early state where Christie is doing fairly decently, but even there it’s not clear that the Union Leader endorsement will be much help. Thanks largely to a recent surge that many observers have attributed to the fact that he has spent a lot of time in the state recently, the New Jersey Governor currently stands in seventh place with an average of 5.3%. While this is hardly much to write home about, it’s better than Christie is doing elsewhere in the country and, more importantly, it exists largely because of upward movement that we’ve seen over the past two months. Despite that slight momentum, though, Christie’s numbers haven’t really moved very much and there’s some indication that the spike in support may have plateaued already.

Given its history, which unlike its reputation, it seems unlikely that this Union Leader endorsement will amount to much of anything in the end. The hope of the Chrsitie campaign, obviously, is that the coverage that it will get him in the coming weeks will cause voters to give him another look and perhaps consider backing him. The fact that there are ten weeks between now and the primary and that, as Nate Silver has noted, many New Hampshire voters tend to wait until the primary is closer to make their final decision, means anything is still possible. At the same time, though, Christie still has many of the same issues that raise concerns among conservatives that he has always had and it’s not clear that, if they are looking to a real alternative to Donald Trump, they’d go for Christie over a candidate like Ted Cruz or Marco Rubio. Given that, Christie seems more likely to suffer the fate of past recipients of the endorsement such as duPont, Forbes, and Gingrich than he is to be the next John McCain.