CNN's effort to bring back a show that had outlived its prime years ago has, predictably, failed. 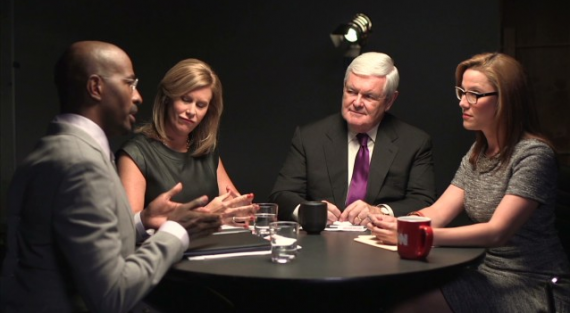 Last year, CNN brought back its long running battle of the partisan pundits series Crossfire as part of Jeffrey Zucker’s ongoing effort to remake the network, which had been struggling to keep up with Fox News Channel and, at the time, MSNBC. The format was slightly different, cut back to a half-hour, and had a rotating series of four hosts from the left and the right rather than a main stable of a prominent liberal and a prominent conservative. While there were sometimes guest appearances consisted of former House Speaker Newt Gingrich, former Obama White House adviser Van Jones, conservative columnist S.E. Cupp, and former Obama campaign operative Stephanie Cutter. Many people greeted news of the show’s return with some confusion given the fact that there didn’t seem to be much of a demand for that type of programming, but the move clearly seemed to be CNN’s effort to appeal to the same kind of audience that the more confrontational ideology-based shows on the other news networks have become known for.

Just over a year after the show premiered, though, it has been officially canceled:

It was a short-lived return for CNN’s “Crossfire” as the network has canceled the political debate show, TVNewser has learned.

All four hosts will remain with the network as political commentators. Some of the staff has already been absorbed into other DC-based programs, while the remainder have been encouraged to apply for open positions in the bureau.

“Crossfire” went missing from the lineup during multiple breaking news cycles this year. Starting in early March, the program was yanked from the lineup as CNN produced near-nonstop coverage of missing Malaysia Airlines Flight 370. The program was again taken off-air in mid-July before the downing of MH17 dominated the news cycle.

Last month, CNN told us the show would remain on hiatus “for awhile more,” and today, official word that the show will not be coming back. In its first iteration, “Crossfire” ran from 1982 until 2005.

I will admit to watching the show a few times during the time that it was on, and it was for the most part thoroughly unwatchable. None of the four hosts had any of the factors that made the show unique and even fun to watch at times in its original iteration, and the partisan battles that would often unfold between them, or between one of the hosts and the various guests that they would have on the show, were as tedious and uninteresting as the ones you can find on the average show on MSNBC or Fox. Moreover, much as the original show went downhill after the original pairing of Tom Braden and Pat Buchanan, or the follow-up pairing between Buchanan and Michael Kinsley, were replaced by the likes of Bob Beckel and Tucker Carlson, there just wasn’t anything compelling about Gingrich, Jones, Cupp, or Cutter that made one want to tune in day after to see what they might be arguing about next. All that you saw was the same old tired partisan talking points being argued back and forth that led to the famous Jon Stewart tirade that ended up spelling the death knell for the original version of the show. In that case, though, the show at least ended with something of a bang, this show ended with a whimper.

From the beginning, the show never really performed well in the ratings to begin with, but I tend to think that this isn’t what did the show in. Starting with the crisis in Ukraine after the Olympics and then continuing through the search for Malaysian Air Flight 370, the growing crisis in the Middle East, the shoot down of Malaysian Air Flight 17, the protests in Ferguson, and most recently Ebola, CNN’s decision to stay true to its reputation as the “Breaking News” network took priority over this new show. If one was watching The Situation Room as the time approached the bottom of the 6pm hour in the East, the words “Crossfire won’t be seen tonight” were almost inevitably going to come out of Wolf Blitzer’s mouth. The show would be off the air for months, and, interestingly, nobody seemed to miss it at all. Perhaps that might have been different had the time to build up an audience, but I tend to suspect not. For its time and in its prime, Crossfire made for great television. It’s 2013 reboot, though, was just another version of the same “partisan hackery” that Stewart criticized in 2004 and which has become far too prevalent elsewhere in cable news programming on other networks.  Crossfire is dead, again, and what the experiment proved in that nobody should have tried to revive that particular Frankenstein’s  monster.