The CIA's drone war in Pakistan has gotten so out of hand that the Pentagon and State Department are reigning it in.

The CIA’s drone war in Pakistan has gotten so out of hand that the Pentagon and State Department are reining it in. 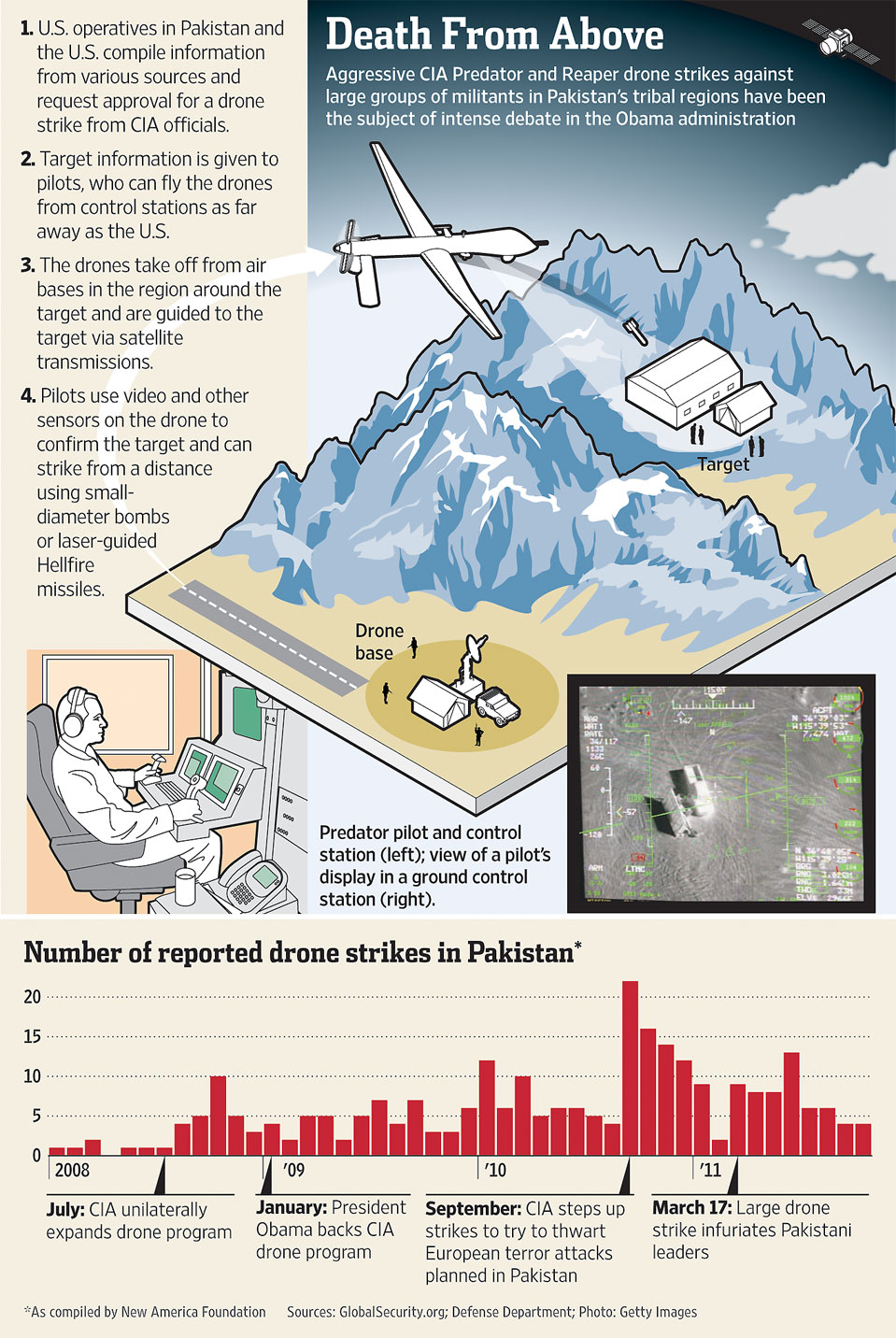 The Central Intelligence Agency has made a series of secret concessions in its drone campaign after military and diplomatic officials complained large strikes were damaging the fragile U.S. relationship with Pakistan.

The covert drones are credited with killing hundreds of suspected militants, and few U.S. officials have publicly criticized the campaign, or its rapid expansion under President Barack Obama. Behind the scenes, however, many key U.S. military and State Department officials demanded more-selective strikes. That pitted them against CIA brass who want a free hand to pursue suspected militants.

The disputes over drones became so protracted that the White House launched a review over the summer, in which Mr. Obama intervened.

The review ultimately affirmed support for the underlying CIA program. But a senior official said: “The bar has been raised. Inside CIA, there is a recognition you need to be damn sure it’s worth it.”

What was the bar before?

Among the changes: The State Department won greater sway in strike decisions; Pakistani leaders got advance notice about more operations; and the CIA agreed to suspend operations when Pakistani officials visit the U.S.

The Pakistan drone debate already seems to be influencing thinking about the U.S. use of drones elsewhere in the world. In Yemen, the CIA used the pilotless aircraft in September to kill American-born cleric Anwar al-Awlaki, a suspected terrorist. But the White House has for now barred the CIA from attacking large groups of unidentified lower-level militants there.

The CIA concessions were detailed by high-level officials in a series of interviews with The Wall Street Journal. But in a measure of the discord, administration officials have different interpretations about the outcome of the White House review. While some cast the concessions as a “new phase” in which the CIA would weigh diplomacy more heavily in its activities, others said the impact was minimal and that the bar for vetting targets has been consistently high.

“Even if there are added considerations, the program—which still has strong support in Washington—remains as aggressive as ever,” said a U.S. official.

It’s not obvious from the report when all this took place. David Petraeus, easily the most famous American field general since World War II, just took over the agency on September 6. It would be odd to install a military commander, fresh from tours of duty in a war zone, as the head of CIA and simultaneously ratchet back the agency’s authority to make tactical decisions on strikes.

Then again, it has long struck me as more than a little odd that the CIA, not the Pentagon, is running our drone wars. Killing bad guys en masse isn’t really an intelligence mission, even granting that the line between intelligence “operations” and military operations has always been somewhat murky. And it’s no longer a matter of a strike every now and again as a complement to a wider operation. Increasingly, the drone war is the whole enchilada.

Last year, Mr. Obama expanded the CIA program to 14 drone “orbits.” Each orbit usually includes three drones, sufficient to provide constant surveillance over tribal areas of Pakistan. The CIA’s fleet of drones includes Predators and larger Reapers. The drones carry Hellfire missiles and sometimes bigger bombs, can soar to an altitude of 50,000 feet and reach cruise speeds of up to 230 miles per hour.

The drone program over the past decade has moved from a technological oddity to a key element of U.S. national-security policy. The campaign has killed more than 1,500 suspected militants on Pakistani soil since Mr. Obama took office in 2009, according to government officials.

To some degree, the program has become a victim of its own success. Critics question whether aggressive tactics are necessary following the eradication of senior al Qaeda leaders in Pakistan, including Osama bin Laden, killed in a helicopter raid by Navy Seals in May after drone and satellite surveillance of the compound where he was living.

Many officials at the Pentagon and State Department privately argued the CIA pays too little attention to the diplomatic costs of air strikes that kill large groups of low-level fighters. Such strikes inflame Pakistani public opinion. Observers point to the rising power in Pakistan of political figures like Imran Khan, who held large rallies to protest the drones and could challenge the current government.

The CIA has always been a strange hybrid. It was created in 1947–via the same Act that created the Secretary of Defense, a separate Air Force, and the National Security Council–as a postwar descendant of the military’s Office of Strategic Services. But whereas OSS was mostly about conducting operations, CIA had a second side: the analysis of intelligence. The two have very different bureaucratic cultures and draw from almost entirely different pools of people. (The same is increasingly true of the FBI, which is an uncomfortable hybrid between a white collar law enforcement operation and a counterterrorism intelligence analysis operation.)

It simply makes no sense to have CIA operating powerful weapons systems and calling the shots on targeting. And, rather obviously, the operations side isn’t listening to the analysis side at all or they wouldn’t be doing it so recklessly. Naturally, this is all done in the black so there isn’t much data to go on.