With just 72 days to go until Election Day, the chances that the Democrats will take control of at least one chamber of Congress are looking quite good. 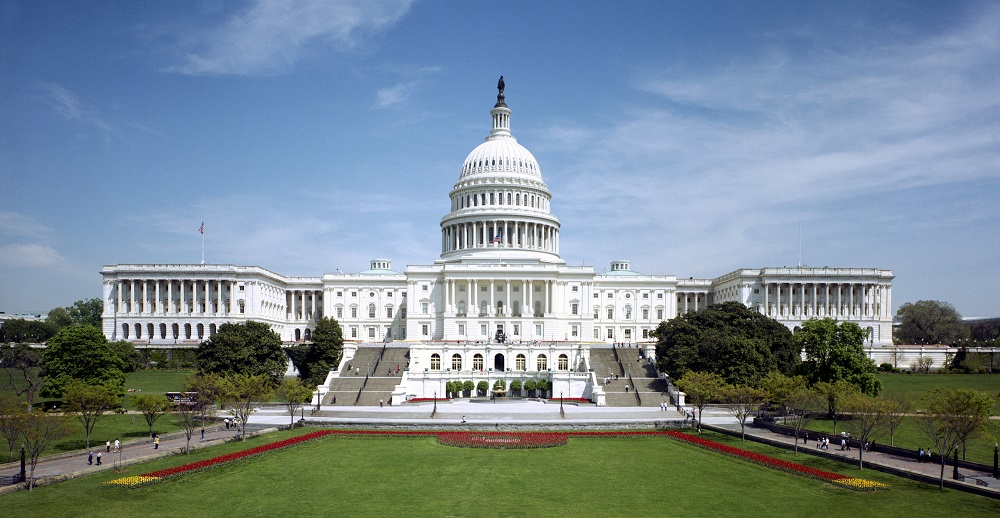 A new series of Generic Congressional Ballot polls continues to provide good news for Democrats as we head into Labor Day weekend and the unofficial start of the General Election campaign season.

The newest poll comes from NBC News and The Wall Street Journal, which gives Democrats an eight-point lead over Republicans with just over two months to go before Election Day:

The earlier NBC/WSJ poll — conducted Aug. 18 through Aug. 22 — showed Democrats with an 8-point lead in congressional preference, with 50 percent of voters preferring a Democratic-controlled Congress and with 42 percent wanting Republicans in charge.

Last month, Democrats were ahead by 6 points on this question, 49 percent to 43 percent.

Voters were split on what concerns them more — Republicans not providing a check and balance on Trump if they control Congress (46 percent who say this), or Democrats going too far in obstructing the president if they’re in charge (45 percent).

And asked their opinions of Democrats winning control of the U.S. House of Representatives and U.S. Senate, 41 percent of voters said that would be a good thing, while 38 percent say it would be a bad thing.

Still, Democrats continue to enjoy an edge in enthusiasm: 63 percent of Democratic voters express a high level of interest in the upcoming elections — registering either a “9” or “10” on a 10-point scale — compared with 52 percent of GOP voters who do the same.

What’s more, 56 percent of Democratic voters believe November’s elections are more important to them than past congressional elections, versus just 38 percent of Republicans who think that.

“Democrats are going to win [House] seats in 2018,” says Democratic pollster Fred Yang of Hart Research Associates. “The question is: How many will that be?”

“The reason why the Democrats still have the upper hand is the enthusiasm issue,” Yang adds.

The NBC/WSJ survey conducted mostly before the Cohen-Manafort news also finds Republicans with a 14-point advantage in which party better deals with the economy — their biggest lead on this question in the poll’s history.

Forty-three percent of voters say the GOP better handles the economy, while 29 percent pick the Democrats.

On the heels of the NBC/WSJ poll is a poll from Harris and Harvard University that also gives Democrats an eight-point lead:

Democrats lead Republicans 45-37 percent on the generic congressional ballot ahead of the midterm elections in November, according to the latest Harvard CAPS/Harris poll released exclusively to The Hill.

The numbers were in line with July’s survey, when Democrats were ahead of Republicans by 43-36 percent in terms of which party they would prefer in November.

The findings also showed Democrats had a 47-31 percent advantage among female voters in the generic ballot question.

“Democrats continue to have an edge in the midterms driven by a widening gender gap as the Democrats have gained considerably with women voters,” said Harvard CAPS/Harris Poll co-director Mark Penn.

The survey also showed the number of undecided voters as November approaches had ticked down to 13 percent in August from 18 percent in February.

The 2018 midterms are shaping up to be a pivotal election as Democrats aim to flip the 23 seats they need to retake the House, though they face tougher odds in taking over the Senate.

The Harvard CAPS/Harris poll showed 59 percent of respondents were “absolutely certain” they would vote in the midterm elections, while 18 percent were “very certain.” Another 14 percent said it was possible that they would cast their ballot in November. 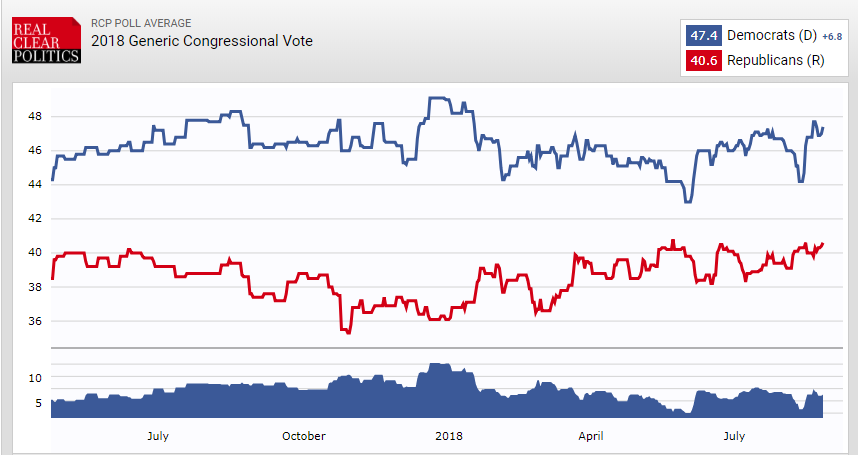 As things stand, Democrats are down by 23 seats in the House of Representatives, meaning they need to pick up at least 24 seats in order to win control of the House. While this seems like a steep number given the fact that gerrymandering and the lack of true battleground districts in recent years has seemed to cement Republicans into control after winning it in the 2010 elections, these numbers are not insurmountable especially given the fact that the latest forecast from the Cook Political Report suggests Democrats could pick up between 25 and 35 seats. If that happens, of course, then Democrats will have a slim majority in the House and Republicans will have a significant political headache since this would seem to guarantee that, at the very least, Democrats would use their majority to launch investigations into the Trump Administration not unlike those that Republicans launched during the Obama years. It seems to me, though, that the more likely outcome is that if the Democrats are going to pick up seats in the House it is likely that it’s going to be something well above the forecast 25-35 seats, perhaps a significantly higher number.

While I’ve cautioned against reading too much into the polls for the better part of the year, we’re now at the point where this is arguably no longer the case. As I noted above, we’re now just 72 days until Election Day, schools across the country are starting to open, and early voting will be starting in many states as early as mid to late September. While it’s still possible that things could change, and that factors in individual races could have an impact beyond individual districts, we’re getting to the point where dismissing the poll numbers is unwise for those of us who are trying to figure out which direction the nation will head after November. It’s always been likely that Democrats are likely to pick up seats in the House of Representatives, of course, but at this point, I would argue that there is, at least, a better than 50% chance that they will gain control of that chamber of Congress at least. The only question is how big that majority might end up being.