After a period where Republicans seemed to be closing the gap, Democrats may be widening their lead heading into November.

After several weeks during which the gap between Republicans and Democrats appeared to be closing, two recent polls are indicating that the Democrats may be reopening a wider lead and that their chances of taking over at least the House of Representatives in the fall may be increasing as stand just five months away from Election Day.

First up is a Quinnipiac poll released yesterday that gives Democrats a seven-point advantage over Republicans in the generic ballot:

Democrats are leading Republicans on a generic House ballot by 7 points ahead of the midterm elections in November, according to a new Quinnipiac University poll.

Forty-seven percent of voters said they would want to see the Democratic Party regain control of the House if the midterm elections were held today.

Forty percent of voters said they would want to see Republicans maintain control of the lower chamber. Democrats need a net gain of 24 seats to reclaim the House.

The survey comes after the biggest midterm primary night of the year, which included races for 85 congressional districts.

The new poll also showed 51 percent of voters of voters disapprove of the way President Trump is handling the job, while 40 percent said they approved of his presidency.

Democrats hold a 10-point lead over the GOP on the generic House ballot, according to a new poll from NBC News and The Wall Street Journal.

The poll, released Thursday, found that 50 percent of respondents said they want Democrats to take control of Congress, compared to the 40 percent who said they want Republicans to maintain control.

The Democrats’ lead is 3 points higher than April, when the same poll found 47 percent of voters said they would prefer a Democrat-controlled Congress. Those in favor of GOP leadership held at 40 percent.

Other recent polling seems to show similar upward movement for Democrats over the past month or so. The Economist/YouGov poll, for example, gives Democrats a six-point lead over Republicans, which the newest IBD/TIPP poll has the Democratic lead at seven points. As with the NBC/Wall Street Journal poll, the latest Reuters/Ipsos poll shows Democrats with a double-digit eleven point lead over Republicans. All this polling was conducted over a period that concluded this past Tuesday. Other polling that was conducted through the end of May, from Rasmussen Reports and Harvard/Harris, has the Democratic lead at four points and seven points respectively. All of this polling was similar in the fact that it showed increased support at some level for Democrats over previous polling, which as I stated had shown the gap between the two parties closing from where it had been earlier in the year.

Looking at the polling averages, one can also see that things about to be turning positive for Democrats again, although it’s unclear if this is a momentary blip or the sign of a new trend that could carry through into the summer and up to the unofficial start of the campaign season on Labor Day. The RealClearPolitics poll average, for example, gives Democrats (45.7%) a 7.4 point lead over Republicans (38.3%), which constitutes a definite uptick for Democrats in a poll that is often a good predictor of where the battle for control of Congress stands at any given moment. The Pollster average, though, is tighter, showing Democrats (41.8%) with just a 4.2 point lead over Republicans, but it’s worth noting that this average is not yet factoring in either the Quinnipiac or NBC/WSJ poll. Finally, the FiveThirtyEight average, which is weighted for poll accuracy, shows Democrats (47.1%) with a 7.5 point lead over Republicans, which is, of course, consistent with the RealClearPolitics. As the chart from RealClearPolitics shows, there does seem to be an uptick in Democratic fortunes of late: 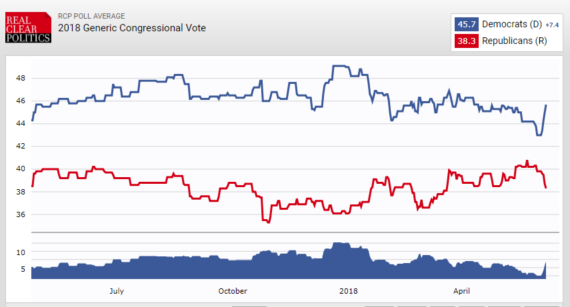 As is always the case, the usual caveats apply. We are, after all, still six months away from the actual elections and many states have yet to hold their primaries. As things stand, though, Republicans already find themselves scrambling to stave off potential disaster. One sign of potential problems for the GOP can be seen in the fact that a deeper look at the aforementioned NBC/WSJ poll shows that, for the moment at least, Republicans are not benefiting from what the public seems to perceive as an improved economy. Specifically, roughly 60% of voters say they are satisfied with the state of the economy, and a plurality of respondents give President Trump credit for that. Ordinarily, you’d expect that to be something that would inure to the benefit of the President’s party. Instead, the poll, as noted, shows Democrats with a ten point advantage and that 50% of voters are saying they would prefer a Democratic-controlled House while 40% say they’d prefer a Republican-controlled House. Perhaps more concerning for Republicans is that 54% of respondents who desire a Democratic-controlled House say that, as of today, they base their support for a Democratic-controlled House on a desire for opposition to Republicans and President Trump, Additionally, 53% of voters say that, with respect to their own Congressional District, they would like to see a new person in office while just 32% say they want to see their Congressman re-elected. Finally, 48% of respondents say that they want a Member of Congress who will act as a check on President Trump while just 23% say they want a Member of Congress who will support the President. Added all together, this is less than encouraging news for Republicans.

All of these numbers come in the wake of what was the biggest primary day of the season so far, one in which Democrats made significant progress that seems to bode well for the fall in a number of states, including New Jersey where they hope to flip several seats currently held by Republicans who are retiring at the end of the current term. Republicans meanwhile, are looking for a “Plan B” since it appears that their original plan on running on the anticipated successes resulting from the tax reform bill passed in December quite clearly isn’t panning out:

Republicans are working on a backup plan in case the GOP tax law does not turn out to be a strong selling point for their party in this year’s midterm elections.

While the booming economy is expected to be a core pillar of the GOP’s midterm messaging, it’s unclear whether the party is going to get credit for the tax law, which has lagged in polls.

As a result, GOP leaders on both sides of the Capitol are emphasizing a breadth of legislative achievements as they seek to convince voters to keep them in charge and not deliver majorities to Democrats.To bolster their case, Speaker Paul Ryan (R-Wis.) and Senate Majority Leader Mitch McConnell (R-Ky.) point to a flurry of wide-ranging bills sent to President Trump’s desk last month.

But congressional leaders say their plan all along has been to sell the GOP’s entire package of accomplishments, including tax reform.

McConnell has been on a media blitz in recent weeks to tout the Senate’s work.

In an interview with The Hill late last month, McConnell highlighted last year’s $1.5 trillion tax-cut package, but also pointed to increased spending for the military, 15 repealed regulations and the confirmation of a conservative Supreme Court justice and 21 conservative circuit court judges.

Ryan and his top lieutenants have made a similar pitch.

“We’re doing more things this week to continue to establish our priorities,” Majority Whip Steve Scalise (R-La.) told reporters Wednesday. “It’s not just lowering taxes for families, but it’s taking care of our military and taking care of our veterans.”

Democrats must be licking their chops. Even when Republicans admit Trump is going down a dangerous road, and rhetorically object to destructive policies, they haven’t the nerve to challenge him. Even actual lap dogs aren’t this timid. Democrats can make a very persuasive case that Republicans have violated their oaths and betrayed their constituents out of sheer cowardice. They are so nervous about a harsh tweet, they will drop or change any protection, avoid any oversight obligation and rubber stamp any unfit nominee for federal office so as to avoid offending Trump. If voters want a Senate that is going to act like part of an equal branch of government and represent their interests, they need a new majority. The only way that happens, the argument will go, is by voting against every candidate with an “R” after his or her name. Even if voters sort of like their Republican senator, a vote for him or her means the Senate remains inert and unresponsive to everyone not named Trump.

Whether it is health-care prices, tariffs, assaults on the rule of law, virulent corruption or a nonexistent infrastructure plan, the Senate’s GOP leadership has chosen to align itself entirely with Trump, even at the expense of their voters and their once-declared principles. Even for Republican voters, it is a powerful argument that the country would be better off voting for moderate Democrats who will flip the majorities in the House and Senate. Now let’s see if Democrats are smart enough to make that case and run compelling candidates in competitive seats.

That, of course, will be the big question, especially when it comes to the U.S. Senate where Republicans have only a one-seat majority. So far at least, Democrats seem to be in good shape there. In Arizona, for example, where Senator Jeff Flake is retiring and Congresswoman Martha McSally is facing a two-pronged attack from the right from former Sheriff Joe Arpaio and State Senator Kelli Ward for the Republican nomination, Democrats are set to nominate Congresswoman Kyrsten Sinema, a relatively moderate Democrat who seems well-suited to the shifting politics of The Grand Canyon State. Just to the north in Nevada, meanwhile, Democrats will likely nominate Congresswoman Jacky Rosen to take on Senator Dean Heller, who is widely seen as the most vulnerable Republican running this year. Finally, in Tennessee, where Bob Corker is retiring, Democrats are likely to nominate Phil Breseden, the former Governor who remains popular in the state, to run against the likely Republican nominee Congresswoman Marsha Blackburn.  While the polls are varied in each of these races, and Democrats face challenges of their own in states such as Montana, North Dakota, Missouri, Indiana, and West Virginia, if there is a “blue wave” this year they are at least well positioned to perhaps gain a small majority in the Senate that could have a significant impact on the last two years of President Trump’s first term regardless of what happens in the House.

Update June 8, 2018:A Fox News poll released after this was posted gives Democrats (48%) a nine-point lead over Republicans (39%). This has obviously led to changes in the respective poll averages.