After months of speculation — and, let’s face it, lies — John Edwards has admitted to having an affair with Rielle Hunter but denies that he fathered her child. Former Democratic presidential candidate John Edwards on Friday admitted to an extramarital affair while his wife was battling cancer. He denied fathering the woman’s daughter.

Edwards told ABC News that he lied repeatedly about the affair with a 42-year-old woman but said that he didn’t love her. He said he has not taken a paternity test but knows he isn’t the father because of the timing of the affair and the birth.

ABC said a former Edwards campaign staffer claims he is the father, not Edwards.

Edwards was a top contender for the Democratic nomination for president, pursuing his party’s nod even after announcing that his wife, Elizabeth, had a deadly form of cancer.

Well, at least he doesn’t love her.

Ugh. What a sad mess.

We have further confirmation, though: that the National Enquirer is more believable than the New York Times.

UPDATE: David Bonior lets Edwards have it with both barrels.

David Bonior, Edwards’ campaign manager for his 2008 presidential bid, said Friday he was disappointed and angry after hearing about Edwards’ confession.  “Thousands of friends of the senators and his supporters have put their faith and confidence in him and he’s let them down,” said Bonior, a former congressman from Michigan. “They’ve been betrayed by his action.”

Asked whether the affair would damage Edwards’ future aspirations in public service, Bonior replied: “You can’t lie in politics and expect to have people’s confidence.”

Although, as Malkin notes, Bill Clinton managed to do it.  Even after being impeached and confessing to his lies, he enjoyed tremendous popularity.  Then again, Edwards isn’t Clinton.  And Clinton’s wife wasn’t battling cancer, either. 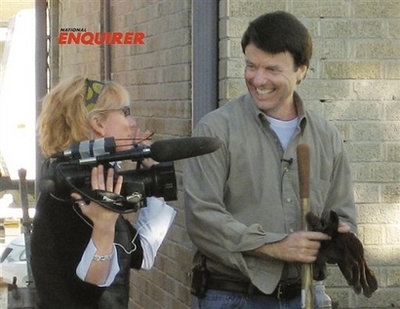