The Federal Budget Deficit is set to end the Fiscal Year close to $1 trillion, and to continue growing after that. 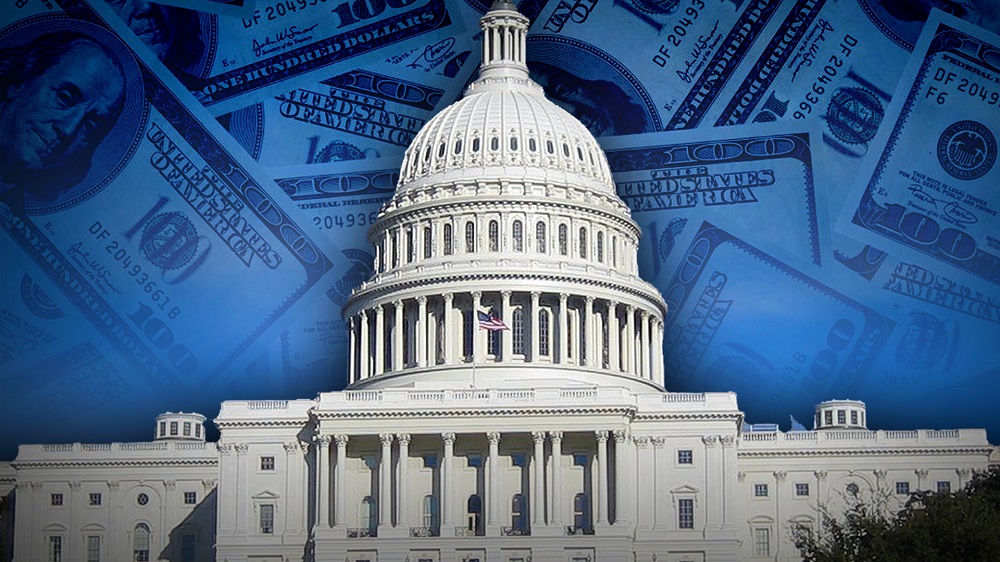 With just about a month to go in the current Fiscal Year, the Federal Budget Deficit has soared to close to $1 trillion:

The federal deficit hit $895 billion in the first 11 months of fiscal 2018, an increase of $222 billion, or 32 percent, over the same period the previous year, according to the Congressional Budget Office (CBO).

The nonpartisan CBO reported that the central drivers of the increasing deficit were the Republican tax law and the bipartisan agreement to increase spending. As a result, revenue only rose 1 percent, failing to keep up with a 7 percent surge in spending, it added.

Revenue from individual and payroll taxes was up some $105 billion, or 4 percent, while corporate taxes fell $71 billion, or 30 percent.

This puts the U.S. well on course for budget deficits at $1 trillion and more, and, as CBS Marketwatch notes, makes this years budget deficit the fifth highest ever:

The budget deficit is widening in a big way. In the first 11 months of the fiscal year, the deficit was $895 billion, which is $222 billion more than the previous year. Outlays have climbed 7% while revenue rose 1%.

Corporate taxes have plummeted by 30% this fiscal year, both because of the lower rate as well as the expanded ability to immediately deduct the full value of equipment purchases. Individual income and payroll taxes have climbed 4%, as increasing wages — mostly, due to more people having jobs — offset a lower withholding rate.

Spending on Social Security and Medicare have climbed 4% as more baby boomers retire, outlays on net interest on the debt have jumped 19% in part due to a higher rate of inflation triggering more payments to inflation-protected securities holders, and defense spending has jumped 6%.

Kevin Hassett, the White House chief economic adviser, was careful in a briefing with reporters on Monday to say the corporate tax cuts — but not the whole package — would pay for themselves with higher growth.

“I think that the notion that the corporate tax side has about paid for itself is clearly in the data,” he said. “On the individual side, there was about a trillion-dollar cost. About $700 billion of that was a refundable child credit that got expanded at the last minute to get the votes they needed to pass it.”

(The Joint Committee on Taxation estimates the modification to the child tax credit to cost $573 billion over a decade, and that the individual side cost $1.13 trillion in total.)

Other administration officials have made more sweeping claims that the entire tax cut would pay for itself, including Treasury Sec. Steven Mnuchin and former National Economic Council Director Gary Cohn.

This is hardly surprising news, of course. When the GOP Congress and President Trump combined forces earlier this year to get a budget passed in the wake of the January government shutdown, it became evident that the era of trillion dollars budget deficits, which we last saw in the early years of the Obama Administration when the economy was still clawing its way out of the hole created by the Great Recession. The difference this time was that these record-setting deficits would be occurring in the middle of a recovery that has been moving forward since the summer of 2009 at a time when financial markets are becoming sensitive to increased debt and interest rates.  When the final budget deal was put forward in mid-February, it included massive spending increases in almost every budget category that busted through the controls that had been put in place by the Budget Control Act of 2011. As The New York Times noted at the time, this effectively means that Republicans have learned to love the deficits and debt they once claimed to abhor. In other words, the Republican Party, which had spent the Obama years railing about spending and deficits, had become the party of deficits and debt. By April, the Congressional Budget Office had officially forecast that we’d be seeing trillion dollars deficits by the end of Fiscal Year 2019 and just a few months later, the national debt crossed a new benchmark and was north of $21 trillion.

As I’ve said many times in the past the supposed Republican fidelity to fiscal responsibility and their concern about rising Federal Budget deficits and the National Debt is something that has proven to be little more than a political slogan that was largely based on who controlled the White House. During the Presidencies of Bill Clinton and Barack Obama, for example, Republicans argued that out of control spending and deficits were destined to drive up interest rates, cause the national debt to explode, and increase interest rates. They used these issues as political cudgels against the Democratic White House during both Administrations and, of course, as a way to appeal to voters and supporters during the elections that took place during those Presidencies. During those times that the GOP managed to take control of both the White House and Congress, though, the message was quite different and the true nature of the Republican Party and its alleged concern for deficits and debt was revealed for the fraud it that it is.

Now that there’ another Republican in the Oval Office, the GOP is returning to form.