Thanks to Donald Trump, public opinion around the world about the United States is at its lowest level in ten years.

With the first anniversary of President Trump’s fast approaching on Saturday, many analysts and pundits have begun assessing the President’s first year in office. As I’ve noted myself repeatedly over the past year, one of the most notable aspects of the past year on the domestic side has been the fact that this President has seen job approval numbers worse than any newly elected President since the advent of modern polling. Those numbers, though, have been positively rosy when compared to what has happened to public opinion around the world about the United States in the year since Donald Trump took office:

Other nations’ approval of U.S. leadership under President Donald Trump hit a historical low of 30 percent in 2017, according to a Gallup poll released Thursday.

The measure, the lowest since Gallup began tracking it worldwide in 2007, signals an 18-point drop from a year earlier, when 48 percent approved of the national influence under former President Barack Obama. It is the single largest year-to-year drop in approval of U.S. leadership — or of any country examined — to date.

The steep decline, researchers said, can be largely attributed to the shift in leadership in the West Wing.

“I think a lot of respondents when they’re being asked this, the first thing that’s top of mind is the leader of the country,” Gallup’s global managing partner, Jon Clifton, told POLITICO.

The falling ratings under Trump were both substantial and widespread.

Gallup found that approval dropped by 10 or more points in 65 of the 134 countries and areas surveyed. Regionally, the image of the U.S. was weaker in virtually every part of the world, registering record lows within multiple countries in Europe, Asia, Africa and the Americas.

Disapproval of U.S. leadership, meanwhile, soared, increasing by 15 points from 2016 to 2017 and notching the highest mark — 43 percent — for any of the four major global powers surveyed over the past decade.

Not since 2008 has U.S. leadership lagged behind both Germany and China in approval worldwide, with the Trump era only outpacing Russian President Vladimir Putin’s government in 2017 of the four nations studied. Germany, by contrast, has not seen support of its public leaders fall below 40 percent mark — nor rise above 50 percent — once over the past decade, with the stewardship of Chancellor Angela Merkel registering 41 percent approval last year.

Ratings for U.S. leadership came in just ahead of Russia’s, which saw 27 percent support in 2017 compared with 30 percent in the U.S. — the slimmest margin between the two nations in the study so far.

Global views were among the worst in nations considered key U.S. allies, researchers said, undermining boasts by Trump about his close relationships with global leaders in pivotal diplomatic partnerships.

“The biggest decline that happened across the world are with our allies,” Clifton said.

Approval of U.S. leadership was lowest in Iceland and Russia, with only 8 percent supporting it. While the rating for the latter improved 6 points from 2016, it still showed vast disapproval among a populace whose leader Trump has sought to build stronger ties with.

While gains under Trump were few and far between, U.S. leadership saw an increase in approval of 10 percentage points or more in four nations: Belarus, Israel, Macedonia and Liberia.

Further details about the survey can be found at Gallup’s website, but perhaps the best way to look at the data is through the charts showing just how drastically international public opinion about the United States has changed over the past year. For example, as this chart shows we’re at the point where the United States is viewed less positively than it was even during the darkest days of George W. Bush’s Presidency: 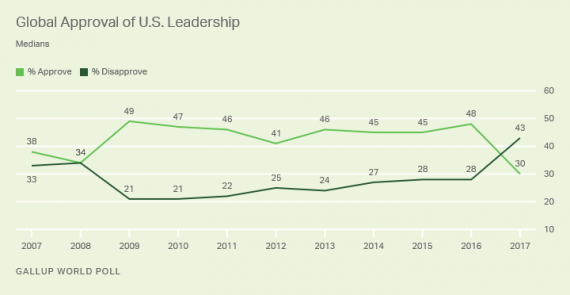 This negative change has been particularly strong among people living in North and South America, with public opinion about the United States in the Americas being far worse than it is in the world as a whole: 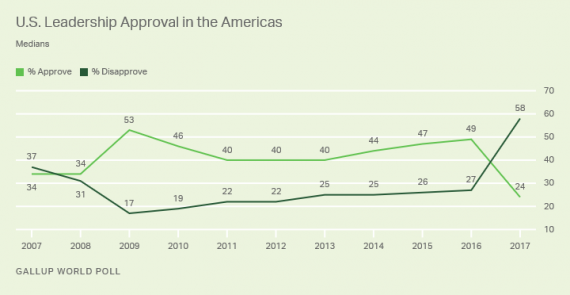 The survey also shows that international views of U.S. leadership have sunk to the point where Germany is now seen as the leading global power, and the United States is effectively tied with Russia and China: 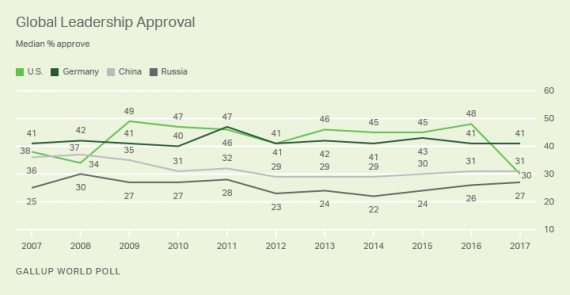 None of this should come as a surprise, of course. Even before he came into office, it was clear that Donald Trump was not viewed very positively around the world, most especially by people in nations that have traditionally been some of America’s most important allies. Part of the reason for this disagreement, of course, is based on the fact that Trump is pursuing policy aims that voters in many of these nations disagree with on a fundamental level. Beyond that, though, a good part of the reasons for this dramatic shift in international public opinion over the course of just one year is due to the fact that, in many ways, Trump personifies the stereotypical “Ugly American” and reinforces many of the negative views that people have about the United States on a personal level. The most recent example of that, of course, came with the President declaring that immigrants from African nations and from other nations such as Haiti come from “shithole” countries and that he would prefer more immigration from nations such as Norway, which is obviously a predominantly Caucasian country. Much of this has been reinforced by Trump’s two biggest foreign trips during his first year in office to Europe and Asia, During both trips, both his behavior and his rhetoric have come across in the worst possible respect and he has managed to most especially irritate people living in the nations that have historically been some of America’s most important allies.

Trump supporters, of course, are likely to shrug news like this off. For them, the fact that the rest of the world holds our President in disdain is a big part of the reason they like him in the first place. Indeed, in many cases, it is the very fact that the rest of the world doesn’t like him that attracts them to Trump in the first place. In reality, though, the fact that public opinion about the United States around the world has turned so negative so quickly is something that could have a serious impact on America’s ability to lead the world in the future. Even when it comes to close allies such as the United Kingdom, France, and Germany, leaders are likely finding themselves having to adjust to the fact that appearing to be too close to Donald Trump would likely harm them among voters at home.

This means that it could be harder for the President and his foreign policy team to rally world leaders in times of crisis when their support would be essential to effectively resolve a situation. This can be seen most directly regarding issues such as President Trump’s decisions to withdraw from the Trans-Pacific Partnership and the Paris Climate Accords, his decision to recognize Jerusalem as Israel’s capital notwithstanding the outstanding issues regarding its status, and  his decision to decertify Iranian compliance with the 2015 nuclear deal. It also plays an important role with respect to our response to the saber rattling of the North Koreans and their efforts to develop nuclear weapons and ballistic missiles capable of reaching the United States and elsewhere in the world. Contrary to Trump’s apparent view, these are not issues that the United States can handle on its own. They require international cooperation, and with so much of the world viewing the U.S. in a negative light due to the current occupant of the Oval Office that is likely to become far more difficult as long as he is in office.