Changes that the Republican National Committee made to delegate allocation rules in response to what happened in 2012 are helping Donald Trump in 2016. 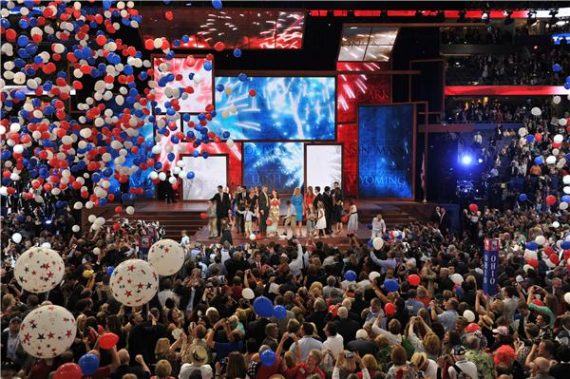 Changes that the Republican National Committee made to the manner in which delegates are allocated in Presidential nomination contests are working in Donald Trump’s favor and appear likely to make him the presumptive nominee sooner rather than later:

Hoping to avoid a repeat of the messy fight for the Republican nomination in 2012, the party drew up a calendar and delegate-selection rules intended to allow a front-runner to wrap things up quickly.

Now, with Republicans voting in 11 states on Tuesday, the worst fears of the party’s establishment are coming true: Donald J. Trump could all but seal his path to the nomination in a case of unintended consequences for the party leadership, which vehemently opposes him.

“Trump has significant advantages, and that’s the way the system is designed,” said Joshua T. Putnam, a political science lecturer at the University of Georgia with an expertise in delegate selection. “It’s right in line with what the folks designing these rules wanted. It’s just not the candidate they preferred.”

As the calendar flips, March brings a whirlwind of states voting on the same days and in quick succession. By the middle of the month, 58 percent of the total delegates will have been awarded, and Mr. Trump could be unstoppable in getting the 1,237 needed to clinch the nomination.

With the exception of Texas, the home state of Senator Ted Cruz, recent polls show Mr. Trump leading in the so-called Super Tuesday states that vote this week, including Alabama, Georgia, Massachusetts and Virginia. Though Texas has the most delegates of states voting on Tuesday, 155, they all award delegates proportionally, so that Mr. Cruz will most likely have to share the haul.

The Southern states, with many evangelical Christians, have been the linchpin of Mr. Cruz’s strategy. But after Mr. Trump trounced him in South Carolina on Feb. 20, winning all 50 delegates, Mr. Cruz’s prospects are not as bright. Mr. Trump carries “enormous momentum,” Mr. Cruz admitted on Friday, and if he sweeps Super Tuesday, when more delegates are awarded than on any other day, “he could easily be unstoppable.”

For Senator Marco Rubio of Florida, who ferociously challenged Mr. Trump last week in a debate and on the stump, mocking the real estate mogul’s “spray tan” and calling him a “con man,” the path forward is narrowing.

The Rubio campaign is hoping for several things in the coming weeks: that Mr. Cruz will withdraw after a poor finish on Super Tuesday; that Mr. Rubio will carry the moderate states of Minnesota and Virginia that day; and that on March 15 — the first day of voting in big winner-take-all states — Mr. Rubio will sweep the 99 delegates in his home state of Florida.

The likelihood of Mr. Rubio’s or Mr. Cruz’s holding a winning hand after Super Tuesday depends on many wild cards built into the delegate rules.

A majority of the 595 delegates at stake are awarded by congressional districts, with the stinger that, in some circumstances, only the top two finishers receive any at all. The winner of each district gets two delegates, the runner-up gets one and everyone else goes home.

This rule was intended by party leaders to turbocharge the campaign of a front-runner. In effect, a candidate who wins a district with a plurality of only about 33 percent, as Mr. Trump has in earlier states’ primaries, ends up with 66 percent of the delegates.

Mr. Rubio could be all but shut out in Texas if he does not finish higher than third in any of its 36 districts, and if he falls short of 20 percent of the vote statewide, which he needs to qualify for at-large delegates.

The high threshold of 20 percent for at-large delegates also applies in Alabama, Georgia and Tennessee. If Mr. Trump and Mr. Cruz do well in those deeply conservative states, they could deprive Mr. Rubio of much-needed support.

That inhospitable math has left Mr. Rubio hunting for delegates in select congressional districts that favor his center-right conservatism, such as the affluent suburbs of Nashville, Atlanta and in Northern Virginia, where he campaigned on Sunday.

Gov. John Kasich of Ohio and Ben Carson, a retired surgeon, could be entirely shut out from many Super Tuesday states. Mr. Kasich hopes to hold on until Ohio’s winner-take-all primary on March 15, a state that Mr. Rubio also covets.

“The quest for Rubio or Cruz is to keep Trump’s delegate lead below 200 to 250” on Super Tuesday, said Mr. Putnam, the University of Georgia lecturer. “If they can do that, a scenario where Rubio is able to sweep both Florida and Ohio — that’s 165 delegates — really cuts into a 200-delegate lead and may flip the narrative.”

Conversely, he added, “if Trump is pushing a 300-delegate lead after Super Tuesday, he’ll have a better chance in Florida and Ohio and make it that much more unlikely another candidate will sweep those states.”

The rules this year, intended to bring the race to a swift conclusion, emerged from the ashes of Mitt Romney’s 2012 defeat. Republican officials said the candidate’s campaign had been damaged by too many debates and by a drawn-out nomination fight that kept alive the hopes — and the attacks — of underfunded challengers.

In 2014, the Republican National Committee rolled out changes compressing the primary calendar and moving up the date of winner-take-all primaries to March 15. Many states, eager for a place in the spotlight, rushed to hold their votes in the first two weeks of March, when delegates are awarded proportionately.

Republican leaders were trying to satisfy two wings of the party: In theory, a shorter calendar favors a well-funded establishment candidate, while proportional delegate selection can bolster a grass-roots conservative.

Above all, party officials hoped to avoid an underdog challenger hanging on until the national convention in July and stealing attention from the presumptive nominee. Paradoxically, this may be the fate of Mr. Rubio, who said on Saturday that he would remain in the race all the way.

“This whole thing is a really messy mixture of unintended consequences,” said Benjamin L. Ginsberg, a Republican lawyer in Washington who was national counsel to the Romney campaign. “The R.N.C. put in a system that was designed to let either an establishment figure or a very popular conservative grass-roots figure wrap up the nomination early. And Donald Trump rewrote the rules.”

Andrew McGill makes a similar point at The Atlantic and also notes that the manner in which several Super Tuesday states have established their version of proportional allocation of delegates is perfectly set up for a candidate like Trump, who is likely to dominate the vote not only statewide but also in virtually all of a given state’s Congressional Districts. The result is that it’s entirely possible that even if Trump’s wins tonight end up coming in closer than they are predicted by the polls, he’s still likely to walk away with the lion’s share of the delegates from all eleven states holding contests today, meaning that it will become next to impossible for either Ted Cruz or Marco Rubio to catch up to the pace that Trump will have established after his wins in February and his anticipated wins tonight. This will especially be true if Trump manages to pull off a win in Michigan next week and then in Ohio and Florida on March 15th. At that point, the ability of any of these other candidates to catch up to Trump will be somewhere between slim and none, and even threats of a floor fight in Cleveland will sound hollow given that Trump would likely easily be able to get the 1,237 delegates he needs to win the nomination on the first ballot while the other candidates may not even qualify to get on that ballot unless they win a minimum of eight states going forward. At the moment, it is beginning to appear less and less likely that any candidate other than Trump will meet that eight state threshold and thus he would be the only candidate on the ballot when it come time for delegates to vote.

It wasn’t supposed to happen this way, of course. Originally, the rule changes regarding delegate allocation were intended to address two problems that developed during the 2012 campaign.

The first was the fact that that haphazard schedule of states that allocated delegates proportionally rather than winner-take-all meant that the race extended out further than it really ought to have. In reality, it was clear by mid to late March that Mitt Romney would eventually get the majority needed to win on the first ballot, but the fact that the schedule ahead included many states that were still awarding delegates proportionally meant that candidates like Newt Gingrich and Rick Santorum still had the ability to continue to accrue delegates. Mitt Romney would get the majority in the states he won, of course, but the pace at which they accumulated was slow and the race dragged on longer than it should have. Moving the proportional states up in the calendar was, along with the idea of returning to the practice of having the convention in the mid-summer rather than around Labor Day, in part meant to bring the primary season to an earlier end so that the nominee could start spending funds allocated for the General Election much earlier than in the past.

The second issue that prompted the rule changes were the attempts by supporters of Ron Paul to use state convention systems in caucus states to essentially change the outcome of caucuses by flooding the state conventions that select delegates with supporters. While this wouldn’t necessarily enable them to change the outcome of the balloting for the nomination, it could give them an outsized influence in other matters, such as the platform and other procedural rules. In response, the RNC adopted rules that make it harder for delegates that are pledged to a candidate based on the result of a primary or caucus to change their vote to another candidate. The intention here, obviously, is to make it harder for an insurgent candidate and his or her supporters to hijack the process. Instead, what these changes are likely to do is make it next to impossible for those Republicans who may harbor fantasies of somehow beating Trump on the floor even if he does have a majority of pledged delegates on the first ballot.