Hillary Clinton still has a massive lead in South Carolina, and in the Super Tuesday states that follow. 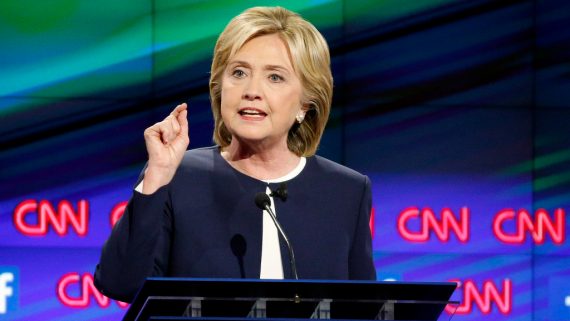 For the moment at least, Hillary Clinton continues to maintain a strong lead in South Carolina with just over a week to go before that state’s Democratic primary:

Likely voters in the Democratic primary in the Palmetto State, set to be held Saturday, February 27, tilt sharply toward Clinton over Sanders, 56% for Clinton to 38% for Sanders.

Clinton’s lead rests heavily on the state’s black voters and women. Both groups made up a majority of voters in the 2008 primary there. Among black voters, she leads 65% to 28%, and among women, she leads 60% to 33%. White voters break in Sanders’ favor, 54% for the Vermont senator to 40% for the former secretary of state, while men are about evenly divided between the two, 49% Clinton to 45% Sanders.

Still, Democratic voters in South Carolina aren’t as firm in their choices as Democrats in New Hampshire or Iowa were, according to pre-election polling. In surveys ahead of the first two contests, majorities said they had made up their minds. In South Carolina, however, just 43% say they have definitely decided whom to support with about 10 days to go before Election Day. Potentially troublesome for Clinton: Blacks were far less likely to say they are committed to a candidate than whites. About a third of black voters (34%) say they have decided on a candidate versus nearly 6 in 10 white voters (57%).

.Across all domestic issues tested in the poll, however, there are broad racial gaps in candidate trust, with majorities of blacks saying they trust Clinton more on each issue. Whites generally break for Sanders, though are evenly split on who would better handle race relations. Majorities across racial lines choose Clinton as better able to handle foreign policy.

The racial divide is perhaps starkest on core Democratic values. Asked which candidate better represents “the values of Democrats like yourself,” nearly two-thirds of whites choose Sanders over Clinton on that measure, while 7 in 10 blacks choose Clinton. And when assessing who would do more to help the middle class, 69% of blacks say Clinton would, while 66% of whites say Sanders would.

Majorities of both blacks (75%) and whites (58%) see Clinton as better able to win in November.

In addition to the CNN/ORC poll, there are a number of other polls that have been released over the past few days in the Palmetto State:

While these numbers do reflect some slight tightening of the race in the Palmetto State from the days when Clinton was leading by forty percent and more, that kind of lead was probably unsustainable to begin with. As it stands, the RealClearPolitics now shows Clinton with a 21.2 point lead over Sanders, and no real indication of anything other than the kind of tightening you’d expect in a race like this. What is important for Clinton in these numbers, though, is the fact that there is no indication that Sanders has made any in roads into Clinton’s massive support among African-Americans in the state, an advantage that is largely responsible for her massive lead in the polls at this point. As long as that advantage continues and the African-American community turns out to vote for her in sufficient numbers, then Clinton stands to be in a strong position to win South Carolina quite handily on Saturday the 27th.

After a month that included barely winning the Iowa Caucuses, a drubbing in the New Hampshire primary, and new polling that suggests that Bernie Sanders is competitive in the Nevada Democratic Caucuses that will be held on Saturday, this is precisely the kind of news that Clinton’s campaign needs at this point. Holding off Sanders in South Carolina at the end of the month would make Clinton well situated heading into the Super Tuesday primaries on March 1st, and the follow-up to Super Tuesday on March 15th. It would also go a long way toward showing that the Sanders phenomenon is far less substantial than it appears to be based on the results and polls of the past several weeks.

As further good news for the Clinton campaign workers in Brooklyn and elsewhere, another set of polls shows that Clinton is maintaining strong leads in nearly all of the Super Tuesday states:

Hillary Clinton has had a tightly-fought race in February against Bernie Sanders, but she could soon be in for a raft of victories in the Super Tuesday contests on March 1.

A new set of polls released by Democratic-aligned firm Public Policy Polling finds Clinton leading in 10 out of 12 primaries to be held that day, with Clinton especially benefiting from the support of minority voters.

From the pollster’s analysis: “Clinton is benefiting in these states from overwhelming African American support. She leads by anywhere from 40-62 points among black voters in the nine of these states that have more black voters than the national average.”

The listing of polled states is as follows

Assuming that these numbers hold up, then Clinton will be well-positioned to roll over Sanders to a large degree very early in March, and that will likely put much of the speculation about her vulnerability to an end. Of course, it’s possible that Sanders will start to close the gap in some of these states, but that would likely require that he make the kind of inroads into the African-American community that seems to be eluding him at the moment. Outside of a handful of endorsements from relatively unknown leaders, Sanders is not being very well-received by that community for some reason while Clinton appears to have her support locked up notwithstanding whatever problems may have developed out of the 2008 race for the Democratic nomination and her heated battle with Barack Obama. To a large degree, that now seems to be water under the bridge for most African-Americans and as long as that’s the case it will likely be hard for Sanders to break through in either South Carolina or any other state where the African-American vote is an important part of the Democratic electorate. If that holds up, then his campaign seems destined to fizzle out rather quickly.