How Much Revenue Would The “Buffett Rule” Bring In? Not Much At All

The Atlantic’s Daniel Indiviglio tries to figure out how much money this “Buffett rule” would bring in to Federal coffers. As Indiviglio notes, it’s not easy to figure out because the Administration has been, perhaps deliberately, vague about what they mean by this rule. Nonetheless, as he notes, the President did say it would create a new tax rate for those earning more than $1,000,000 per year and starts from there: 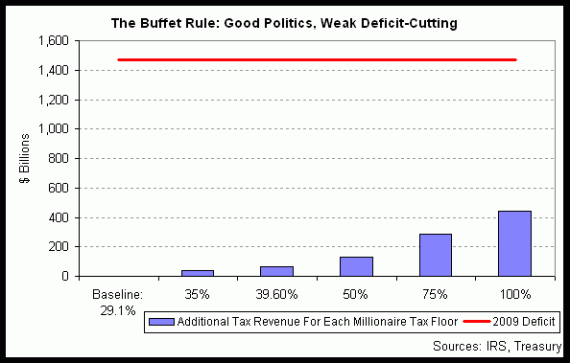 I used IRS data for 2009* adjusted gross income (which I know isn’t perfect, but it was the best they had). I then calculated the effective tax rate based on its data to be 29.1% for all Americans who earned more than $1 million. I consequently took the total income of the group and multiplied by different tax rates (as shown). I subtracted the taxes already paid (at the 29.1% effective rate) to figure out how much additional revenue they’d provide to the U.S. government at those new tax floors.

As you can see, the short answer is: some, but not enough to make a dent in the deficit. If you put a floor at their current marginal tax rate of 35%, the government would obtain $37 billion more dollars. That might sound like a lot, but it amounts to just 2.5% of the 2009 $1.5 trillion deficit (which is the red line shown). If you increase the floor to the pre-Bush-tax-cut marginal rate of 39.6%, the additional revenue grows a bit — to $66 billion, or 4.5% of the year’s deficit.

Even if you get really aggressive, it doesn’t help much. Even a tax floor for these individuals at 75% would cover less than 20% of the year’s deficit. And, of course, even most populist among us probably worries that a tax rate that high could do more harm to the U.S. economy than good. All of these calculations also assume that these wealthy individuals wouldn’t find new and creative ways to ensure that their income was shielded from very high tax rates. (They would.)

So this Buffet Rule is a great populist proposal if the president wants to score some political points, but it has little practical value.

In other words, it is, as I’ve said, a campaign slogan, not a serious tax proposal.