If Obama Pulls The Trigger On Executive Action, Republicans Have Limited Options

Republicans don't really have many options if the President pulls the trigger on immigration reform via executive action. 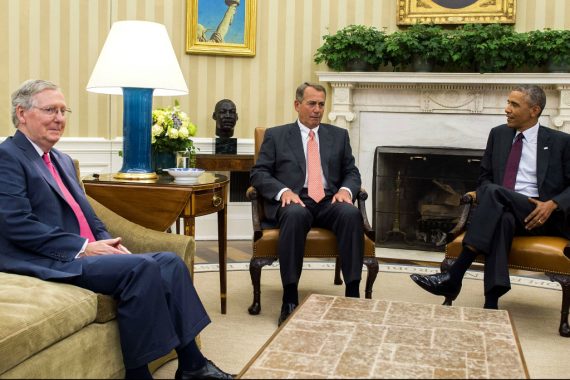 As the White House leaks details of the President’s threatened executive action on immigration, Congressional Republicans are debating how to respond to what now seems like an inevitable event:

Congressional Republicans have split into competing factions over how to respond to President Obama’s expected moves to overhaul the nation’s immigration system, which are likely to include protecting millions from being deported.

The first, favored by the GOP leadership, would have Republicans denounce what House Speaker John A. Boehner (R-Ohio) has called “executive amnesty” and use the party’s new grip on Congress to contest changes to the law incrementally in the months ahead.

The second, which has become the rallying cry for conservatives, would seek to block the president’s decision by shutting down the government for an extended period until he relents.

The brewing internal debate, which started to play out Thursday in meetings on both sides of the Capitol, represents the first significant test for Boehner and Senate Minority Leader Mitch McConnell (R-Ky.) since Republicans won full control of Congress, forcing the leaders to balance their desire to show that the GOP can govern and their fears of upsetting the conservatives who lifted them to power.

“It’s a big test for the leadership. We cannot listen to the loudest, shrillest voices in our party,” said Rep. Charlie Dent, a moderate Republican who represents the Philadelphia suburbs. “At some point we have to fund the government, and we should not fight to attach some demand. I don’t want to stand by and watch as our party gets driven into a ditch.”

Rep. Mario Diaz-Balart (R-Fla.), an advocate for an overhaul of immigration law, has been counseling House Republicans this week about the need to show empathy for undocumented workers as the party rails against the Obama administration, according to GOP aides familiar with his deliberations. He is concerned that too much vitriol could send the wrong message to Hispanic voters.

Still, Diaz-Balart said in a recent interview that Obama lacks the legal authority to act on his own and if he does so will upend any hope of bipartisan accord on a host of unrelated issues, including major trade agreements and tax reform.

“If the president ignores the fact that there’s going to be a new Congress in January, that makes it frankly almost impossible to get anything done,” he said.

Added Sen. John McCain (R-Ariz.): “This whole threat of an executive order has a chilling effect on everything.”

On the right, there are calls for the party to attach the immigration issue, and specifically the issue of executive action, to the spending bills that must be passed either during the current lame duck session or very soon after the new Congress has convened in January. While this is idea that has generally only been put forward so far by the likes of Ted Cruz and various other Tea Party aligned members of the House and Senate, it’s an idea that seems to be sticking around at least as some kind of a threat. Senator Jeff Sessions, who is likely to become the head of the Senate Budget Committee in the new Senate, brought up the possibility of using the spending bills to block the President, with the implicit threat that there would be a government shutdown if the White House didn’t back down. While this threat is likely to play well with the base and with back benchers in both chambers, it’s apparently that leadership isn’t at all on board with the idea. While House Speaker John Boehner refuses to say that a shutdown threat is off the table, it seems clear that he would prefer to take another, less drastic course of action should the President go forward. Incoming Senate Majority Leader Mitch McConnell, meanwhile, continues to say that a shutdown is not an option, even if it concerns a showdown with the President over executive action on immigration.

Another option apparently being weighed is to make the President’s actions on immigration part of the House’s lawsuit against the President:

House Speaker John A. Boehner (R-Ohio) is considering expanding a proposed federal lawsuit over President Obama’s executive orders to include action on immigration. Filing a separate lawsuit over the president’s authority to protect millions of undocumented immigrants from deportation is another option that gained traction Thursday during talks among party leaders.

The idea to use the courts as an initial means of dissent, should the president move forward in the coming weeks to protect millions from deportation, moved to the front of the House GOP’s playbook after the leadership reviewed it. Boehner reportedly wants to respond forcefully and quickly should the president act and believes a lawsuit would do that, as well as signal to conservatives in his conference that he shares their frustrations about the president’s use of executive power.

Several Republicans who spoke on the condition of anonymity to be candid confirmed Boehner’s outlook and the thrust of the leadership’s discussions. They cautioned that any final decision by House Republicans will be made only after consulting rank-and-file members in the wake of a White House announcement — if the president decides to issue executive orders on immigration.

Given the fact that this lawsuit, which was authorized back in July, has yet to be filed it wouldn’t take too much work to shift the focus of the case as suggested here. Right now, of course, the lawsuit as authorized by the House is limited to the President’s decision to expand the period of time during which employers have to comply with the Affordable Care Act’s mandate to provide health insurance coverage for employees. Leaving aside for the moment the preliminary issues regarding standing and the Political Question Doctrine that apply to any lawsuit by Congress against the President, and which I’ve discussed at length before here and here , this has always seemed like a particular weak ground on which to base a lawsuit regarding the supposed illegal use of Executive Branch power. For one thing, there was always something quite odd about the idea of Republicans who oppose the PPACA suing the President for taking an action that, at least temporarily, provides some relief from the requirements of that law. More importantly, though, is the fact that the period for which the extension applies will have most likely expired by the time any court even got to the merits of the lawsuit, assuming that even happened. The same could not be said about the merits of a lawsuit based on the kind of relief from immigration laws that the President is contemplating, which would last at least until the end of his Presidency unless he decided to repeal it himself, which seems unlikely.

In order to proceed in this manner, of course, the House would need to pass a new resolution authorizing a change in the grounds of the lawsuit, but that would be relatively easy given the Republican majority in the body. Such a lawsuit, though, likely would not fare any better than one based on the Affordable Care Act. It would still face the same problems related to standing and other issues that a PPACA lawsuit would face, for example, and based on standing precedent the most likely outcome of any proceedings dealing with those issues would seem to be dismissal of the lawsuit for failure to state a claim. That issue would likely get appealed, obviously, but that just means that the matter would continue to be unresolved as the days ticked down on the Obama Administration, the 2016 Presidential race drew closer, and more and more people took advantage of the benefits of the President’s action. Moreover, as I discussed earlier, it is by no means clear that there is anything about the proposed Presidential actions that is per se illegal. So, even if we got to the point where a Court considered the House’s claims on the merits it’s entirely possible that those actions will be found to be wholly within the boundaries of the authority of the Executive Branch as established by the Constitution, and under the discretion granted to the President and his deputies under the relevant immigration laws.  In the end, of course, that may not matter since the purpose of the lawsuit has little to do with the law and everything to do with politics, including the desire to placate the more radical elements of the Republican Caucus who are likely to push for options like government shutdown fights, or even impeachment, in response to the President’s action.

There is one final option available to the GOP, of course, and that would be to push some kind of a bill on immigration reform that the President might agree to. As we sit here today, though, it’s hard to imagine that happening if the President really does pull the trigger on executive action. There’s little obvious enthusiasm in the GOP Caucus in either chamber of Congress for such reform to begin with, and if the President does take the action he’s threatening it seems as though the eagerness to act will almost completely disappear. Responding in such a manner immediately, for example, would likely be seen as the kind of capitulation that I would not expect to see from anyone on Capitol Hill so early in a Congressional term. Additionally, executive action would quite obviously inflame the GOP base to such a degree that it would be politically difficult for even pro-reform Republicans to act once the President has acted.

This is why the President’s current position is politically unrealistic if the he really wants Congress to pass an immigration reform bill. Whether he likes it or not, the bill that passed the Senate is dead. It probably would not have passed the House in any case, but it most certainly would not pass during a lame duck session. More importantly, it would not pass the new Senate that will take office in January. Rather than setting up a confrontation based on a bill that will be dead once the current Congress ceases to exist, the answer will be to start over in a new Congress. Which means that the new bill will have to be something that can pass both the House and the new Senate.  That is a political reality that the President doesn’t seem to recognize.  Of course, that assumes that he is making this threat because he wants to see Congress act. I don’t think he does. I think that, like every other Democrat, he wants to keep the immigration issue unresolved so that his party can continue to exploit it to appeal to Latino voters. This doesn’t let the GOP off the hook, of course, and it would be entirely logical for the President to put the new Congress on notice that he will act if they don’t. That, however, is a battle for 2015, not a battle for a lame duck session.

All of that notwithstanding, it does appear for the moment as if the President is going to take action of some kind. If he does, though, it’s not at all clear what the GOP can do to stop him, or to push back, other than acting on immigration reform itself. Unfortunately, the President’s very actions are likely to make Congressional action of any kind difficult if not impossible. It’s almost as if neither side of this debate actually wants to get anything done, isn’t it?