The results of the 2014 midterms should teach us some lessons about how to handle and evaluate polling.

In the final weeks of the 2012 Presidential campaign, Republicans desperate to find evidence that Mitt Romney’s fledgling campaign was doing better than the polling as indicating latched on to the analysis of an unknown blogger named Dean Chambers who claimed that all of the polling showing Romney losing the race was “skewed” to produce results that hurt Republicans. In addition to making that argument, Chambers used methods that he never really explained to “unskew” the polls and produce what he claimed were accurate numbers that showed Romney on the verge of a big win. At the time, many analysts, including Nate Silver, who at the time was still running his FiveThirtyEight blog at The New York Times, pushed back on Chambers analysis and “unksewing” methods to show why he was wrong. In the end, of course, the polling of the Obama-Romney match up proved to be mostly accurate, and the polls that did show Romney surging in late October proved to be outliers. Nonetheless, the “skewed polls” meme is one that continued to survive despite the fact that the actual outcome of the 2012 race suggested that the argument that the polls were deliberately biased held no water.

This year, though, there seem to have been plenty of examples of races where pollsters ended up being wildly off the mark when you compare their numbers to the results in given races. Some of the more prominent examples of this, of course, are the ones that grabbed headlines last night, such as a Virginia Senate race between Mark Warner and Ed Gillespie that has ended up being far closer than any publicly released poll showed, a good deal of the polling in Iowa and Kentucky that purported to show the races in those states tightening, and the polling of the Maryland Governor’s race that apparently failed entirely to see that Democratic nominee Lt Governor Anthony Brown was in deep trouble in his race against Republican Larry Hogan. Some of these polling errors can obviously be dismissed as outliers, of course, but others, including the failure to see tight races in states like Virginia and Maryland, suggest something was fundamentally wrong with the polling models that were being used. There is, of course, likely to be much study of what happened with the polling this year, but in the first of what are likely to be several post-mortems on inaccurate polling during the 2014 midterms, Nate Silver notes that the polling this time around shows evidence of being faulty to the point where it was overstating the level of support for Democratic candidates in key races:

The Democrats’ complaints may have been more sophisticated-seeming than the “skewed polls” arguments made by Republicans in 2012. But in the end, they were just as wrong. The polls did have a strong bias this year — but it was toward Democrats and not against them.

Based on results as reported through early Wednesday morning — I’ll detail our method for calculating this in a moment — the average Senate poll conducted in the final three weeks of this year’s campaign overestimated the Democrat’s performance by 4 percentage points. The average gubernatorial poll was just as bad, also overestimating the Democrat’s performance by 4 points.

This evidence suggests thatpolling bias has been largely unpredictable from election to election. Beyond the shadow of a doubt, the polling was biased against Democrats in 1998, 2006 and 2012. However, just as certainly, it was biased against Republicans in 1994, 2002 and now 2014. It can be dangerous to apply the “lessons” from one election cycle to the next one.

Our estimates of polling bias are evaluated in the same way we’ve assessed them in the past. They rely on a simple average of all polls1 released in the final three weeks of the campaign. Bias is calculated as the difference between the polled margin and the actual result. (For instance, a poll that projects the Democrat to win by 7 points when she actually wins by just 3 has a 4-point Democratic bias.) We exclude races in which one of the top two finishers was an independent candidate.

Here’s a chart that Silver produced showing how state level polls of Senate races tended to tilt toward Democrats: (click to enlarge) 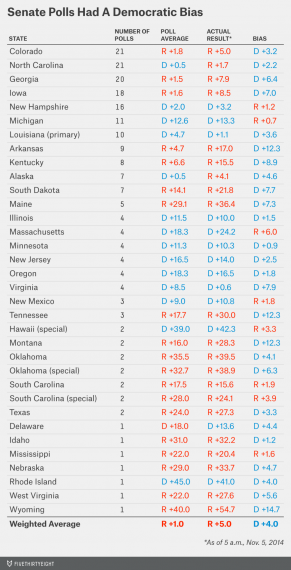 And here’s the charge for Governor’s races: 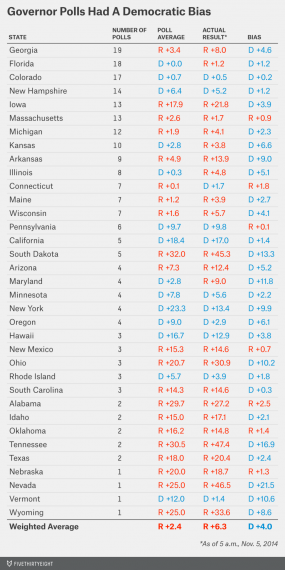 Silver has some further comments:

This type of error is not unprecedented — instead it’s rather common. As I mentioned, a similar error occurred in 1994, 1998, 2002, 2006 and 2012. It’s been about as likely as not, historically. That the polls had relatively little bias in a number of recent election years — including 2004, 2008 and 2010 — may have lulled some analysts into a false sense of security about the polls.

Interestingly, this year’s polls were not especially inaccurate. Between gubernatorial and Senate races, the average poll missed the final result by an average of about 5 percentage points — well in line with the recent average. The problem is that almost all of the misses were in the same direction. That reduces the benefit of aggregating or averaging different polls together. It’s crucially important for psephologists to recognize that the error in polls is often correlated. It’s correlated both within states (literally every nonpartisan poll called the Maryland governor’s race wrong, for example) and amongst them (misses often do come in the same direction in most or all close races across the country).

This is something we’ve studied a lot in constructing the FiveThirtyEight model, and it’s something we’ll take another look at before 2016. It may be that pollster “herding” — the tendency of polls to mirror one another’s results rather than being independent — has become a more pronounced problem. Polling aggregators, including FiveThirtyEight, may be contributing to it. A fly-by-night pollster using a dubious methodology can look up the FiveThirtyEight or Upshot or HuffPost Pollster or Real Clear Politics polling consensus and tweak their assumptions so as to match it — but sometimes the polling consensus is wrong.

It’s equally important for polling analysts to recognize that this bias can just as easily run in either direction. It probably isn’t predictable ahead of time.

Silver promises more analysis of this issue to come, but the lesson to talk away from this seems to be two-fold. First of all, polling in and of itself is often as much art as science, especially when it comes to determining what an accurate “likely voter” model might be for a given election. If that model is off by even a little in one aspect or another than it could have a real impact on the quality of the poll that will be produced, and to misstate support for one or the other candidate depending on the impact of the errors that may have been made. This means that individual polls should be taken with a grain of salt, especially if they tend to deviate from the norms that other polls are showing. It’s possible of course that the poll that looks like the deviation is the one that’s accurate, but the odds are that it isn’t. The second lesson is that, contrary to what the media horse race watchers like to think, polling isn’t the Holy Grail that it has been presented to be and that other factors can tells us what might be going on in a particular race. As Silver notes, his models try to take those other factors into account, and as the race went on it was clear that the modelers like him were pretty much spot on in their assessment when all is said and done.

Another point that ought to be addressed is one that we touched on in the election night podcast I was a part of last night. Especially in the last four years or so, there has been a plethora of new pollsters coming into the business, many of whom seem to be fly by night operations that few people have ever heard of. With little more than a press release and access to social media, though, these pollsters can suddenly end up being taken as breathlessly as a established pollster like Quinnipiac or Marist and, depending on which website you look at, added in to poling averages with seemingly little assessment of whether or not they should be taken seriously. That last point, of course, is important because adding bad polls into a polling average tends to make the polling average less reliable. RealClearPolitics seems to be pretty careful about who they add into their averages, which is why I tend to rely o them when looking at numbers, but Talking Points Memo and Huffington Post both seem to take more of a kitchen sink approach and throw almost every poll taken in a given race into the average without consideration of reliability. Both of those sides do offer customization tools that allow you to filter out certain pollsters, of course, but the average user isn’t going to know enough about polling to know which companies to filter out and which ones can be considered generally reliable. All of this means that even when you’re looking at averages you may not be learning much.

Ultimately, of course, one can legitimately point out that we pay far too much attention to polling and who is ahead or behind at a given moment in a given poll. This is a fair point, and it’s one reason why, this year, I have tended to stay away from obsessively blogging about every new poll that is released like I admittedly did in 2010 and 2012. For one thing, there are simply too many of them these days to do that anymore. For another, there’s coming to be so much variation in the individual polling that spending the ten or fifteen minutes it takes to write up a post on one poll just isn’t worth the time. When I have written about polls, I have tried to be careful about comparing them to averages, as I did, for example, with that Bluegrass poll from a few weeks ago that purported to show Alison Lundergan Grimes leading Mitch McConnell which we know now was obviously inaccurate. Given that following the polls has become such a big part of political coverage on cable news and online, I’d humbly suggest that this kind of skepticism, which I hope to continue to adopt going forward, would be well warranted on everyone’s part.