No Permanent Victories in American Politics

Pundits and partisans constantly overreact to the momentary mood expressed in a single election. The Republicans have already rebounded from 2008. The Democrats will recover from 2010. 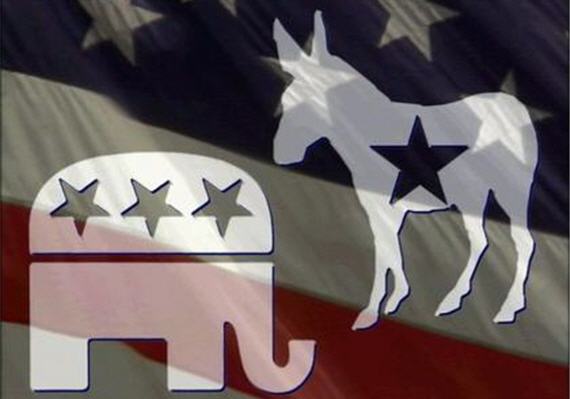 E.J. Dionne, of all people, perfectly captures a larger truth about American politics with the headline,  ”No Final Victories.”

It was just four years ago that the Democratic Party began its comeback in what now seems like another country.

The economic collapse was not in anyone’s imagination, but the nation’s political mood was sour. A substantial majority was fed up with George W. Bush, weary of the Iraq War and ready to vote for Democratic congressional candidates who pledged themselves to “a new direction,” a nebulous but useful slogan.

Democratic constituencies were united as never before. Young voters were flocking the party’s way — those under 30 would cast 60 percent of their ballots for Democratic House candidates — and so were moderates and independents.

The tidal wave that two years later would carry Barack Obama to the presidency began rising in places not usually associated with insurrection, the vast suburban and exurban areas around the old cities of the Midwest and Northeast.

Now, of course, Democrats are less than 24 hours from a massive electoral defeat.

Lou Cannon (“The Conservatives Come Back From the Dead“) joins the chorus, noting that declarations from Sam Tanenhaus, James Carville, and others about a permanent Democratic majority were premature.

Writing in the current issue of National Review, Rammesh Ponnuru and Richard Lowry argue that in 2006 and 2008 voters “fired Tom DeLay’s congressional majority and quit on President [George W.] Bush” but did not “become latter-day McGovernites.” They cite as evidence a July 2009 Gallup report which said that by a 2-1 margin Americans said their views had become more conservative in recent years. They might also have taken notice of an even more remarkable August 2009 Gallup finding that persons who call themselves conservatives outnumber self-identified liberals in all 50 states. In this survey 40 percent of Americans said they were conservative, 35 percent said they were moderate and only 21 percent said they were liberal. Conservatives have long outnumbered liberals in Gallup surveys but their percentages declined during the last Bush years.

Now, in advance of this election, percentages have soared both for Republicans and conservatives. Earlier this week [on Oct. 27] Gallup found that 55 percent of likely voters favor Republicans or lean Republican. The comparable Democratic figure is 40 percent. This is the highest percentage for Republicans since the Reagan years. Of these voters 48 percent said they were conservative, 32 percent moderate and 20 percent liberal.

The magnitude of the Republican/conservative comeback may be even greater than these raw numbers show, for the electorate has become more liberal on a number of social issues, notably single-sex marriage and legalization of marijuana. What the electorate has NOT become more liberal on is government spending and government overreach. Poll after poll shows that Americans are concerned about the prospects of long-term deficits and the soaring national debt and believe that President Obama and the Democratic-controlled Congress are trying to do too much too fast.

While that’s right, it’s not exactly a complete picture. Yes, most Americans want fiscal discipline.  But they also want government to provide lots of goodies and not raise taxes.   Indeed, Cannon tacitly acknowledges this later in the piece:

Democrats might take post-election solace if they recognize that the surge of their opponents has been made possible by a convergence of conservative values and liberal ideas.

“Americans are conservative,” the columnist George F. Will said many years ago. “What they want to conserve is the New Deal.” Indeed, however cynical it may sound, Republicans who not so long ago were talking of privatizing the bedrock New Deal program of Social Security now present themselves as the program’s defenders for future generations. Republicans also talk of saving Medicare, the great add-on to the New Deal by the Lyndon B. Johnson administration. That’s smart politics since older Americans depend on Social Security for most of their income and Medicare for most of their health needs. Any party that tries to eviscerate either of these programs will surely face the wrath of the voters.

So take heart, liberals. The conservatives you prematurely buried two years ago aren’t going away, but neither are you. The Republicans are not going the way of the Whigs. President Obama has two years in which to make a course correction. The two-party system lives.

Indeed, it does.    Scott Rasmussen (“A Vote Against Dems, Not for the GOP“) gets it right in this passage:

The reality is that voters in 2010 are doing the same thing they did in 2006 and 2008: They are voting against the party in power.

This is the continuation of a trend that began nearly 20 years ago. In 1992, Bill Clinton was elected president and his party had control of Congress. Before he left office, his party lost control. Then, in 2000, George W. Bush came to power, and his party controlled Congress. But like Mr. Clinton before him, Mr. Bush saw his party lose control.

That’s never happened before in back-to-back administrations. The Obama administration appears poised to make it three in a row. This reflects a fundamental rejection of both political parties.

What comes next, however, is debatable:

More precisely, it is a rejection of a bipartisan political elite that’s lost touch with the people they are supposed to serve. Based on our polling, 51% now see Democrats as the party of big government and nearly as many see Republicans as the party of big business. That leaves no party left to represent the American people.

Voters today want hope and change every bit as much as in 2008. But most have come to recognize that if we have to rely on politicians for the change, there is no hope. At the same time, Americans instinctively understand that if we can unleash the collective wisdom and entrepreneurial spirit of the American people, there are no limits to what we can accomplish.

That’s the animus at the core of the Tea Party and Rasmussen is trying to sell a new book on how that “Movement is Fundamentally Remaking Our Two-Party System.”   We’ll see.   It strikes me as more likely, however, that we’ve had three consecutive “change” elections because things simply aren’t going so well and the voters are frustrated.