Barack Obama may not be doing much campaigning in the fall if recent poll numbers are any indication. 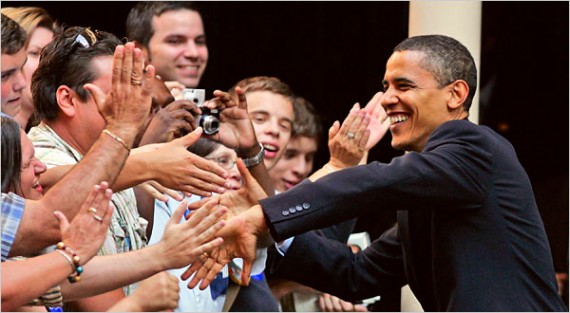 The Democratic-leaning Public Policy Polling reports that President Obama may actually harm candidates in at least five states if he endorsed and campaigned with them this fall:

In Illinois, Louisiana, Pennsylvania, Ohio, and Wisconsin an Obama endorsement comes down as a net negative impact on the chances of a voter supporting a candidate by anywhere from 14 to 33 points. There are two reasons for that. First, Republicans respond more negatively to Obama than Democrats do positively. Second, independents are completely unimpressed by an Obama endorsement. In Ohio 6% say they’re more likely to support an Obama endorsed candidate while 57% say they’re less likely to. In Wisconsin it’s a 6/51 spread. In Pennsylvania it’s 10/56. In Illinois it’s 15/39 and in Louisiana it’s 16/49.

This isn’t all that surprising, of course. Last year the President made campaign appearances for Jon Corzine in New Jersey and Creigh Deeds in Virginia, and his appearances had no discernible positive impact on the outcome of the races in those states. Then, in January, he made a last minute trip to Massachusetts to campaign for Martha Coakley, who ended up losing to Scott Brown.

In the case of these five states, though, the negative impact of associating with the President couldn’t be more stark: 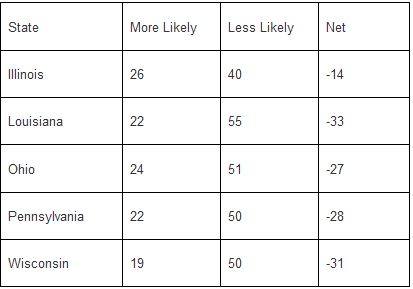 What’s perhaps most striking about these numbers is the fact that, with the exception of Louisiana, each of these states are ones that Obama won, in some cases by overwhelming margins, in the 2008 election.

It’s not just an anti-Obama feeling driving these numbers, though, because Bill Clinton would have the same impact in the states in question: 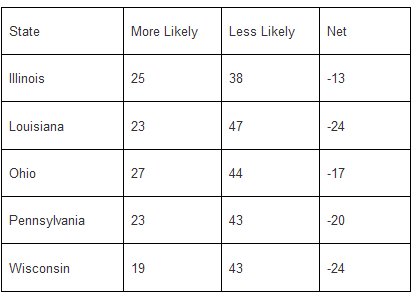 Clearly, then, we’re dealing with an anti-Democrat wave in these states rather than just animus toward the President, and that’s not good news for the Democrats in the fall.