Ohio voters have approved a referendum designed to reform the manner in which district lines are drawn. 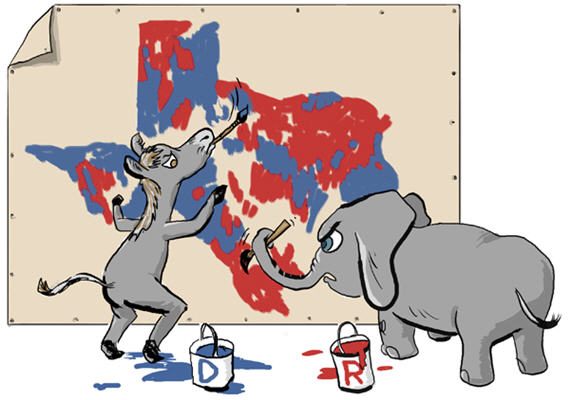 The Issue 1 ballot measure passed 75% to 25%, based on unofficial results from the Ohio secretary of state’s office. It will be implemented in 2021.

Ohio’s population size in 2020 US Census results will determine the number of seats the state will have in the US House of Representatives. Once the number of seats is determined, the lines will be determined by the state legislature. Then, in order to adopt the map for 10 years, 60% of Ohio state legislators and 50% of members of the two leading parties (likely Republicans and Democrats) must approve it. If it’s not approved, a commission that includes the governor, auditor, Ohio’s secretary of state and four lawmakers will move to approve or decline the redistricting proposal.

If that commission fails to approve the new map, it would be sent back to the statehouse with a lower threshold for approval.

According to the Cincinnati Enquirer, this hybrid of state officials and a commission to determine redistricting would be a national first.

Republicans controlled the 2011 redistricting process and drew a map that favored their party across the state. Democrats currently control only four of the state’s 16 congressional districts.

Former US Attorney General Eric Holder, now the chair of the National Democratic Redistricting Committee, praised the passage of the reform in Ohio.

“The redistricting reform passed today in Ohio makes it much harder for politicians to rig elections through gerrymandering and gives me hope that we can restore fairness to our elections in states around the country,” Holder said in a statement. “Ohio has proven that when citizens work together to demand their elected officials support a fair redistricting process, positive change is possible.”

The redistricting process that Ohio will be adopting is somewhat different from the reforms that have been implemented in states such as Arizona, California, and 11 other states. Under those systems, redistricting is generally handled via a nonpartisan state commission rather than the state legislature and the final map is submitted to the legislature for an up and down vote, with the proviso that the legislature does not have the authority to amend the map the commission has drawn. Ohio’s procedure would not involve an independent commission per se but would require the Congressional map to be approved by what amounts to a supermajority of the state legislature. If that fails then a commission made up of Executive Branch and Legislative Branch officials would come up with a map that the legislature would then be required to approve the map the commission came up with, albeit with a smaller vote threshold than the first go around. While this is a step below the truly independent commission that other states have adopted, it is designed to create a procedure that makes it harder for one political party to use a simple majority to draw district lines that are overwhelmingly in its favor.

All of this comes at a time when gerrymandering is coming under a sustained legal attack that could have a real impact going forward. Pending before the Supreme Court right now there are two cases dealing with the issue of partisan gerrymandering, one from Wisconsin and one from Maryland, and a third case dealing with racial gerrymandering. The Court has heard oral argument in each of those cases, and a decision is expected by the end of the current term in June. In addition to these cases, a Federal District Court in North Carolina held that the Tarheel State’s Congressional map was invalid due to the extremely partisan manner in which the district lines were drawn. In what was clearly the most significant case in this area, the Pennsylvania Supreme Court made a similar ruling with respect to the Congressional Districts in the Keystone State, the major difference between this case and the other three, of course, is that the Pennsylvania ruling is based on the state Constitution rather than Federal law or the U.S. Constitution. Because of this, the Justices have so far declined to intervene in the Pennsylvania case, and the state Supreme Court moved forward with its threat to issue its own redistricting map when the Republican legislature and Democratic Governor failed to come to an agreement on a new map.

Of these legal developments, only the Pennsylvania case will have an impact on the 2018 midterms. The map that the Pennsylvania Supreme Court drew will be in effect in November and is already projected to result in Democrats picking up as many as five seats in the state’s Congressional delegation if not more. In the case of the Supreme Court cases arising out of Wisconsin, Maryland, and Texas, it’s likely that the Court will hold that any revisions to the districts should wait until after the current round of midterm. This is due in no small part to a 2006 decision in a case called Purcell v. Gonzalez. in which a unanimous Court ruled that the Ninth Circuit had erred not giving greater consideration to allowing an Arizona Voter ID law to go into effect just weeks before the election, and in a concurring opinion Justice Stevens noted that leaving a stay in effect in advance of an impending election would be the best way for future courts to deal with the legal issues involved in the case. While the Court’s rulings in the three aforementioned cases would come roughly four months before the midterms, the amount of time that it takes to redraw district lines argues strongly that the current lines should remain in effect for the pending election. Similarly, the Ohio law will not have an impact on current district lines and would not go into effect until after the 2020 election and the Congressional apportionment that follows. Nonetheless, this referendum is a positive step forward toward reforming a process that is badly in need of reform.