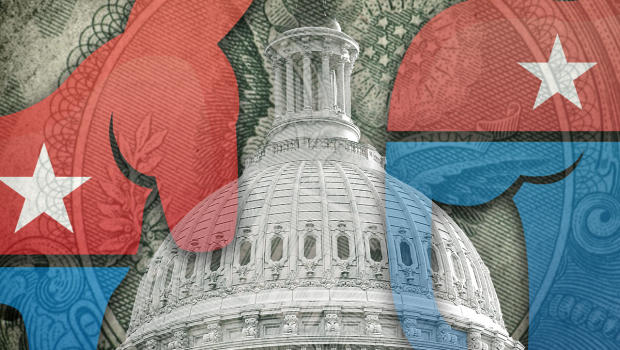 Political scientist Keith Poole of the University of Georgia provides the data:

In the first plot, we show our primary measure of polarization – the difference in party means – illustrating its evolution between 1879 and the present. As can be seen, the ideological distance between the parties in Congress grew to record levels between the 111th and 112th Congresses. By this measure, polarization in the 112th House (1.069) has doubled from the 96th House (1979-1981, 0.528), and risen over 50% from the 102nd House (1991-1993, 0.676). Polarization in the Senate – which has remained the more moderate of the two chambers – has surpassed its previous high in the 46th Senate (1879-1881, 0.832), with polarization in the 112th Senate jumping to 0.845. It is now safe to say that polarization in Congress has reached an all-time high, exceeding even levels seen during the late nineteenth century.

We can see that the trend started in the 1990s and, of course, that was the beginning of the shift of southern Democrats to the Republican Party, so that explains at least part of the trend.

Still, it is rather amazing that we are at polarization levels not seen in over a century.  On one level this is just a set of facts, and facts that confirm, to one degree or another, our perception of the current situation in the Congress (and therefore in national politics writ large).  On another level, it is worth remembering that, as I noted in passing earlier this week and in more detail in another recent post (as well as here), we are not in an electoral context that is especially competitive.  It is disturbing, in terms of an evaluation of the health of democracy, that we are at a stage of polarization and paralysis in our legislature at a time in which that body is not very responsive to the voters (and does beg the question as to the degree to which the polarization in Congress is a good reflection of the electorate or not).  As I have noted before, there is something fundamentally wrong with a situation in which Congressional approval can be in the teens, but reelection numbers are in the 80-90%-range (and with only a handful of seats being competitive).  Why do we tolerate this?

Back to the data, Poole notes, as he has for a while, that the polarization is asymmetric:  “contemporary polarization of the parties is almost entirely due to the movement of congressional Republicans to the right.”  He also notes that the numbers are more dramatic in the House than the Senate:

We have previously written about asymmetric polarization, arguing that the primary driver of contemporary partisan polarization has been the steady movement of congressional Republicans to the right. This trend appears to have continued through the 112th congress. House Republicans – despite a large majority earned in the 2010 midterm elections – have continued their rightward drift, adding more conservative members than moderate members. Senate Republicans also became a more conservative group in the 112th Congress, while Senate Democrats remained mostly ideologically static. Some of this phenomenon is attributable to the fact that Democrats – particularly northern Democrats – were already holding liberal policy positions in the 1960s.

Here’s the partisan comparison in the House:

The conclusion is rather interesting, especially given the cries of socialism and other dramatics that we hear on a daily basis within the public discourse:

The “Great Society” programs enacted during the 1960s have appeared to represent the leftward edge of what is practically achievable in American public policy (for example, from an ideological standpoint, “Obamacare” is not more liberal than Medicare, enacted in 1965). Congressional Democrats have staked out this position and have mostly maintained it in recent American history. Congressional Republicans, on the other hand, continue to pioneer new ideological territory along on the rightward edge of American public policy. It remains unclear whether and how long this pattern can persist.

Of course, the cries of socialism, etc. make sense in the context of the data:  if the party of the right is skewing, ideologically, more to the right then they and their supporters are more likely to see the status quo as more liberal:  not because the status quo has changed, but because they have.

It is also why a lot people who were once prominently Republican/conservative no longer see themselves as such.