Thanks largely to Administration mistakes, the Bergdahl deal is not going over well. 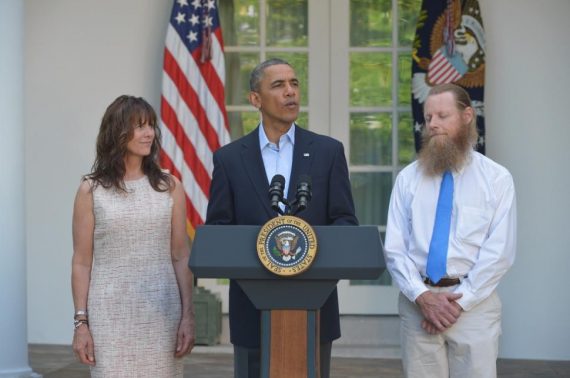 Viewed from a distance, the release of Bowe Bergdahl from five years of Taliban captivity should have been nothing but a win for the Obama Administration. Coming just a week after President Obama’s announcement that most American troops would be out of Afghanistan by the end of the year, and that all of them would be out by the end of 2016, the release of a P.OW. would seem to be a good thing in a typical situation. The Bergdahl matter, though, has been anything but typical. From the President’s failure to notify Congress of the release of five Guantanamo Bay prisoners, to the questions about Bergdahl’s disappearance, to the terms of the deal itself, the entire saga has raised nothing but controversy on both sides of the political aisle. And, not surprisingly, the questions about the deal are having an impact on public opinion.

A new USA Today/Pew Research poll, for example, a plurality of Americans surveyed said the deal was a bad one:

WASHINGTON — Public opposition to the exchange of five Taliban prisoners for captive Army Sgt. Bowe Bergdahl has less to do with Bergdahl himself and more with how President Obama handled the transfer, according to a new USA TODAY/Pew Research Center poll.

The poll shows 43% of Americans say it was wrong for Obama to make the deal, compared with 34% who say it was the right thing to do.

Thirty percent of those surveyed have a strong opinion of Bergdahl, whose decision to leave his post in 2009 and subsequent capture by the Taliban is under investigation by the Army. Of those, half say they were sympathetic, and half say they are angry with Bergdahl.

The 128 veterans included in the poll are much more harsh in their assessment of the 28-year-old sergeant. Only 6% of veterans who responded say they sympathized with him, while 33% say they were angry. By 68%-16%, veterans say Obama made the wrong decision.

Indeed, most Americans say they believe the United States has a responsibility to bring a captive American soldier home, regardless of the circumstances: 56% say Bergdahl was entitled to those efforts even though he left his post in 2009; 29% say he wasn’t.

On one key point in the political controversy, the public backs Congress. By 2-1, Americans say the president should be required to inform Congress before such transfers.

A law passed by Congress last year requires the secretary of Defense to do exactly that, at least 30 days before transferring detainees out of the U.S. naval base at Guantanamo Bay, Cuba. Obama signed that bill into law despite arguing that the notification provision was unconstitutional because it hindered his ability “to act swiftly in conducting negotiations with foreign countries regarding the circumstances of detainee transfers.”

The results are similar in a new CBS/New York Times poll:

Just over a week after U.S. Army Sgt. Bowe Bergdahl was freed by the Taliban, a CBS News Poll shows 45 percent of Americans disapprove of the deal that saw him released in exchange for five Taliban militants, while 37 percent approve of it. About one in five do not have an opinion.

Most Americans — 56 percent — say the U.S. paid too high a price to secure Bergdahl’s release. Among veterans, that figure rises to 65 percent.

Republicans and independents say the deal cost the U.S. too much, while Democrats are more divided: 42 percent think the terms of the agreement were reasonable, but almost as many — 39 percent — say the U.S. paid too high a price.

The poll finds a clear majority — 72 percent — think President Obama should have notified Congress in advance, and that includes 55 percent of people identifying themselves as Democrats.

Historically, CBS News Polls have often shown that Americans prefer a president seek the approval of Congress on military matters.

This is hardly what the Obama Administration was hoping for when this deal went down, obviously. Ordinarily, one would expect the public to rally around a President who successfully brought how an American soldier who had been held prisoner for half a decade. That might have happened too, if the Administration had handled this matter better from a public relations standpoint. In retrospect, making this such a high profile matter by having the President himself make the announcement in a Rose Garden press conference with Bergdahl’s parents by his side and then sending the President’s National Security Adviser out to the Sunday morning shows the next day to praise Bergdahl as someone who served with ‘honor and distinction’ even when the White House was, or should have been, well aware of the charges that Bergdahl had deserted his unit prior to being captured. Additionally, it seems rather obvious that the White House could have saved itself some major political headaches by at least making some effort to comply with the law requiring Congressional notification, even if that notification was just limited to the Chairpersons of the relevant committees and the House and Senate leadership. Instead, we’ve heard shifting excuses for the failure to comply with the law, none of which stands up to scrutiny.

The Obama Administration, then, has nobody to blame for these bad poll numbers but itself at this point. It’s possible that they’ll turn around as we learn more about this case, of course, and it’s unclear what impact this will have on the President’s overall job approval numbers, which remain bad in general and worse when it comes to foreign policy. For the time being, though, numbers like this are likely to keep the Administration on the defensive over a deal that they could’ve made seem a lot better if they’d handled it smarter from the start.