The votes are in. And the outcome is meaningless. 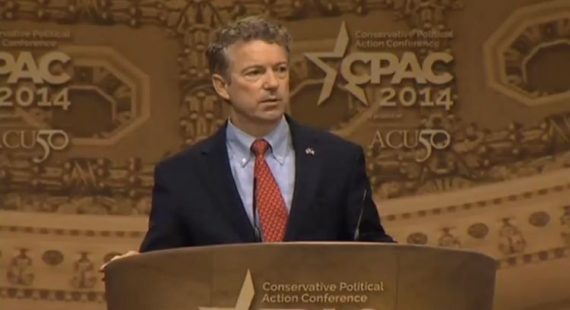 The Conservative Political Action Conference concluded its 2014 session yesterday with its traditional straw poll and, as he had last year, Kentucky Senator Rand Paul ended up winning by a wide margin:

The announcement came at the end of the group’s annual three-day confab. Organizers said that 2,459 attendees voted on computer kiosks.

Paul, who spoke at the conference on Friday, also won the 2013 straw poll. As the results were announced at a resort just outside the Washington Beltway, the crowd erupted and began chanting “President Paul” while waving “Stand with Rand” signs.

As I said, this is the second time that Senator Paul has won the CPAC Straw Poll, and it follows up similar wins pulled off by his father in 2010 and 2011. In all four cases, it seems apparent that the victory was thanks in no small part to the enthusiastic support that both Pauls seem to get from college aged voters and what has been a rather obvious effort by the campaigns to “stuff” the ballot boxes of the straw poll by subsidizing their appearance at the conference via the payment of ticket prices and the like.

However, they accomplish it, though, it honestly doesn’t mean a darn thing.  As James Joyner noted in last year’s post about Senator Paul’s victory, the CPAC Straw Poll has little correlation to political reality. Like the Ames Straw Poll that will unfortunately receive far too much attention in the summer of 2015, the CPAC poll is unrepresentative, unscientific, and easily manipulated as has been demonstrated time and time again.  Indeed, only four times in the past 38 years — Ronald Reagan in 1980 and 1984, George W. Bush in 2000, and Mitt Romney in 2012 — has the winner of the CPAC poll gone on to win the GOP nomination, and only three times has the winner of the poll actually ended up being elected President.

Despite all of this, of course, Paul’s back-to-back wins at CPAC, which he very well might repeat again next year, will no doubt get him a lot of press and will serve to fuel speculation about his Presidential intentions and fortunes in 2016. However, Senator Paul would do well to speak with Presidents Jack Kemp, Phil Gramm, Steve Forbes, George Allen, Rudy Giuliani, and Ron Paul before letting this go to his head.