Is the NYPD becoming too much like the CIA? 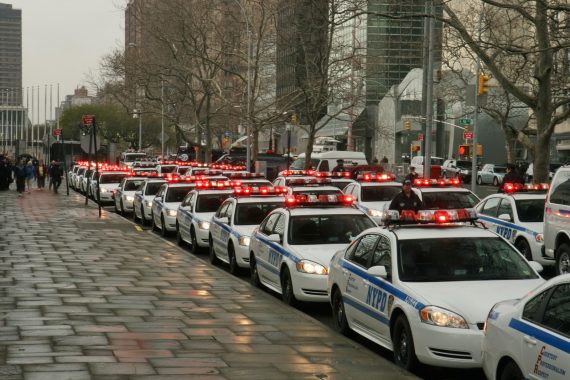 The Associated Press is out with a lengthy investigative report revealing the existence of a previously secret partnership between the New York City Police Department and the Central Intelligence Agency:

Since the terrorist attacks of Sept. 11, 2001, the NYPD has become one of the country’s most aggressive domestic intelligence agencies. A months-long investigation by The Associated Press has revealed that the NYPD operates far outside its borders and targets ethnic communities in ways that would run afoul of civil liberties rules if practiced by the federal government. And it does so with unprecedented help from the CIA in a partnership that has blurred the bright line between foreign and domestic spying.

Neither the city council, which finances the department, nor the federal government, which contributes hundreds of millions of dollars each year, is told exactly what’s going on.

The department has dispatched teams of undercover officers, known as “rakers,” into minority neighborhoods as part of a human mapping program, according to officials directly involved in the program. They’ve monitored daily life in bookstores, bars, cafes and nightclubs. Police have also used informants, known as “mosque crawlers,” to monitor sermons, even when there’s no evidence of wrongdoing. NYPD officials have scrutinized imams and gathered intelligence on cab drivers and food cart vendors, jobs often done by Muslims.

Many of these operations were built with help from the CIA, which is prohibited from spying on Americans but was instrumental in transforming the NYPD’s intelligence unit.

A veteran CIA officer, while still on the agency’s payroll, was the architect of the NYPD’s intelligence programs. The CIA trained a police detective at the Farm, the agency’s spy school in Virginia, then returned him to New York, where he put his new espionage skills to work inside the United States.

And just last month, the CIA sent a senior officer to work as a clandestine operative inside police headquarters.

Aside from the involvement of the CIA, which at the very least doesn’t appear to violate the letter of the law (the spirit being another issue entirely), the most controversial part of this newly revealed program is the extent to which the NYPD officers that were part of it engaged in what some might call not just ethnic profiling, but ethnic harassment:

The NYPD carved up the city into more than a dozen zones and assigned undercover officers to monitor them, looking for potential trouble.

At the CIA, one of the biggest obstacles has always been that U.S. intelligence officials are overwhelmingly white, their mannerisms clearly American. The NYPD didn’t have that problem, thanks to its diverse pool of officers.

Using census data, the department matched undercover officers to ethnic communities and instructed them to blend in, the officials said. Pakistani-American officers infiltrated Pakistani neighborhoods, Palestinians focused on Palestinian neighborhoods. They hung out in hookah bars and cafes, quietly observing the community around them.

The unit, which has been undisclosed until now, became known inside the department as the Demographic Unit, former police officials said.

(…)A hot spot might be a beauty supply store selling chemicals used for making bombs. Or it might be a hawala, a broker that transfers money around the world with little documentation. Undercover officers might visit an Internet cafe and look at the browsing history on a computer, a former police official involved in the program said. If it revealed visits to radical websites, the cafe might be deemed a hot spot.

Ethnic bookstores, too, were on the list. If a raker noticed a customer looking at radical literature, he might chat up the store owner and see what he could learn. The bookstore, or even the customer, might get further scrutiny. If a restaurant patron applauds a news report about the death of U.S. troops, the patron or the restaurant could be labeled a hot spot.

The program also utilized “mosque walkers” to attend services at mosques around New York City and gather intelligence, even if there was a no specific information that the mosque itself was the location of any suspected criminal activity:

For years, detectives used informants known as mosque crawlers to monitor weekly sermons and report what was said, several current and former officials directly involved in the informant program said. If FBI agents were to do that, they would be in violation of the Privacy Act, which prohibits the federal government from collecting intelligence on purely First Amendment activities.

The FBI has generated its own share of controversy for putting informants inside mosques, but unlike the program described to the AP, the FBI requires evidence of a crime before an informant can be used inside a mosque.

Valerie Caproni, the FBI’s general counsel, would not discuss the NYPD’s programs but said FBI informants can’t troll mosques looking for leads. Such operations are reviewed for civil liberties concerns, she said.

“If you’re sending an informant into a mosque when there is no evidence of wrongdoing, that’s a very high-risk thing to do,” Caproni said. “You’re running right up against core constitutional rights. You’re talking about freedom of religion.”

That’s why senior FBI officials in New York ordered their own agents not to accept any reports from the NYPD’s mosque crawlers, two retired agents said

As Adam Serwer points out, the fact that the FBI refused to accept information from the “mosque walkers” is likely more a reflection of the fact that they are being sued in California for a similar infiltration program at California mosques. Like the NYPD, the FBI generally doesn’t seem to think there are many limits on its domestic surveillance authority in the age of the War On Terror:

As Mother Jones reported earlier this week, the FBI does have thousands of informants in Muslim communities — and it’s really far from clear where exactly the FBI runs up against what it believes is its own  legal limits when it comes to domestic surveillance. Community mapping, conducting preliminary investigations of communities based in part on ethnic or religious background — the FBI believes it has the authority to do those things. The California mosque case is a prime example of the FBI being “proactive” in investigations without prior hard evidence of criminal activity. Caproni says in the article that the FBI is not allowed to to send an informant into a mosque with no evidence of wrongdoing, but it’s worth noting that the government has invoked the state-secrets privilege to dismiss the lawsuit alleging that the FBI did just that in California.

The profiling is a serious concern, of course, as is the issue of police office conducting surveillance at mosques without at least some degree of suspicion that improper activity beforehand. As the article points out, police in Los Angeles and elsewhere around the country have rejected adopting a similar programs because of the rather obvious First Amendment issues involved. The program also  brings back to the fore questions of domestic surveillance of political and religious organizations that were prevalent during the anti-war years of the 60s and 70s. In fact, the article point out that this NYPD unit, established in response to 9/11, has been utilized in other, more political contexts as well:

The department clashed with civil rights groups most publicly after Cohen’s undercover officers infiltrated anti-war groups before the 2004 Republican National Convention in New York. A lawsuit over that program continues today.

During the convention, when protesters were arrested, police asked a list of questions which, according to court documents, included: “What are your political affiliations?” “Do you do any kind of political work?” and “Do you hate George W. Bush?”

“At the end of the day, it’s pure and simple a rogue domestic surveillance operation,” said Christopher Dunn, a New York Civil Liberties Union lawyer involved in the convention lawsuit.

That’s certainly how it seems, when a unit supposedly founded to track down hints of international terrorist plots in New York City is suddenly found investigating and interrogating members of anti-war groups simply because the Republican National Convention was taking place in NYC in 2004. It’s a practice that comes disturbingly close to some of the domestic surveillance programs that the NYPD utilized the Bureau of Special Services to conduct surveillance on anti-war groups, civil rights groups, and student groups on the city’s college campuses, and it largely only because possible because the restrictions that had been placed on NYPD surveillance in the 1970s were significantly weakened in the wake of the September 11th attacks.

Outside of the surveillance, though, the other aspect of this story that raises eyebrows is the close involvement of the Central Intelligence Agency. There’s nothing illegal, or necessarily wrong, with the CIA training state and local law enforcement in intelligence gathering and the international threats that may find their ways to American shores. However, the law forbids the CIA from gathering information inside the United States; that’s supposed to be the job of the FBI, which is part of the Department of Justice and governed by the same legal restrictions as all other law enforcement officers.

While there doesn’t appear to be any direct sharing of information between the NYPD and the CIA, the nature of their relationship is close enough that one has to wonder just how porous the firewall might be. Several CIA officials have served inside the NYPD even while remaining on the CIA payroll, a departure from normal practice. Additionally, there appears to be some evidence that intelligence has in fact been shared, albeit informally:

Though the CIA is prohibited from collecting intelligence domestically, the wall between domestic and foreign operations became more porous. Intelligence gathered by the NYPD, with CIA officer Sanchez overseeing collection, was often passed to the CIA in informal conversations and through unofficial channels, a former official involved in that process said.

By design, the NYPD was looking more and more like a domestic CIA.

“It’s like starting the CIA over in the post-9/11 world,” Cohen said in “Protecting the City,” a laudatory 2009 book about the NYPD. “What would you do if you could begin it all over again? Hah. This is what you would do.”

That’s not what the NYPD is supposed to be about, though, and blurring the line between policing and intelligence gathering (and the line between law enforcement and the CIA) poses the danger of transforming police departments into something far different from what they are intended to be. The militarization of  American police forces, in response to the War On Terror and the War On (Some) Drugs, is something that Radley Balko and other investigative reporters have  documented quite well over the years, and the concerns about police being trained to think like soldiers are rather obvious. Equally dangerous, though, is the possibility that police are being trained to think likes spies for whom civil liberties and the rights of civilians are merely afterthoughts.

The NYPD is denying that this program even exists, as is the CIA. If it doesn’t exist, though, one wonders why NYPD officials have apparently shredded large numbers of documents related to surveillance operations. This needs to be investigated further before it’s too late.