Republican candidate Troy Balderson was declared the winner of a Special Election in suburban Central Ohio, but the fact the race was even close should worry Republicans nationwide. 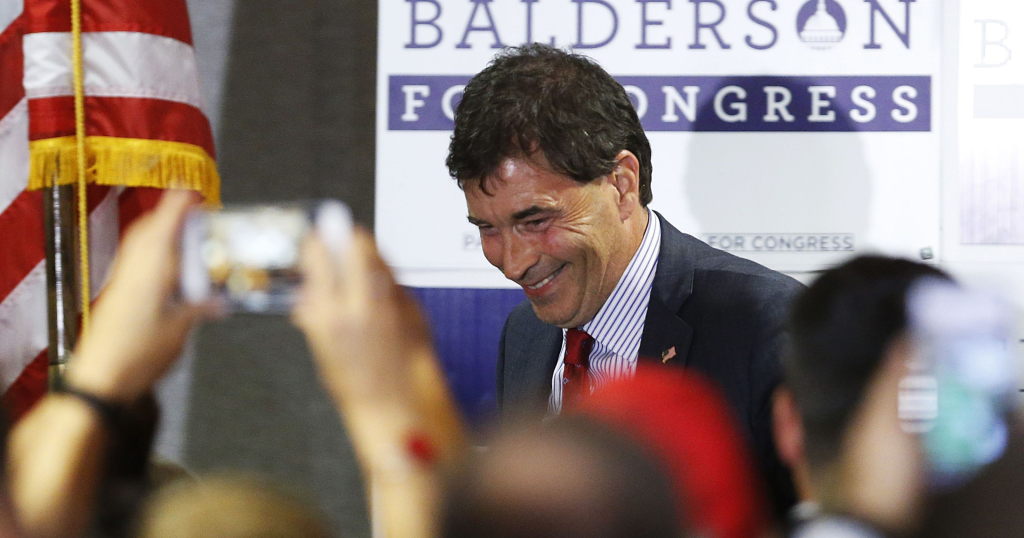 Republican Troy Balderson has been declared the winner of a Special Election in Ohio that was seen by many as a precursor of the upcoming midterm elections:

Republicans succeeded in holding on to a traditionally safe congressional district in Ohio on Friday when State Senator Troy Balderson eked out a narrow victory over a Democratic challenger, Danny O’Connor, according to The Associated Press, in a special election whose result was too close to call for nearly three weeks. Mr. Balderson will hold the seat for just over two months before he faces Mr. O’Connor again in the general election in November.

Party leaders celebrated Mr. Balderson’s win, but the nail-biting result — and the prospect of repeating the race so soon — amplified Republican anxieties about the midterm elections, when they must contend with demoralized centrist Republicans, popular unease with the Trump administration and energized Democrats eager to retake control of the House.

In a tweet on Friday afternoon, Mr. Balderson thanked his supporters and looked ahead to his rematch with Mr. O’Connor.

In recent years, Republican lawmakers had grown accustomed to winning by large margins Ohio’s 12th Congressional District, which covers a sprawl of suburban and rural areas in the north-central part of the state. President Trump won the area by 11 points in 2016.

But this time around, Republicans had to go all-out to keep the district in their column, spending millions on high-octane television ads targeting Mr. O’Connor and convincing two bitter Republican rivals — Gov. John Kasich and Mr. Trump — to each endorse Mr. Balderson.

National Republicans declared victory for Mr. Balderson long before the race was officially called, and Mr. Trump took personal credit for his win.

“When I decided to go to Ohio for Troy Balderson, he was down in early voting 64 to 36. That was not good,” the president tweeted on Aug. 7, the night of the election. “After my speech on Saturday night, there was a big turn for the better. Now Troy wins a great victory during a very tough time of the year for voting.”

Mr. Balderson’s victory could be undone in November, when the party will be defending its 23-seat House majority. And in the weeks since the special election, Mr. Trump turned on Mr. Kasich in a tweet, falsely describing Mr. Balderson’s razor-thin victory as a “big win” and blaming Mr. Kasich for “tamping down enthusiasm for an otherwise great candidate.”

As I noted the day before the Special Election earlier this month, the race in Ohio’s 12th District was garnering national attention precisely because it was following a pattern that we’ve seen since the beginning of the Trump Administration. Republican seats have come up for Special Election across the country, in some cases due to retirement in others due to the fact that the previous Member of Congress had been appointed to a position in the Trump Administration. More often than not, these Special Elections have taken place in districts that President Trump, and the previous member, had won easily in the 2016 election. Instead of sailing to an easy victory, though, the Republican candidate in each of these races has invariably found themselves in a tighter than expected race thanks in no small part to lower job approval ratings for the President and the fact that national Democrats were pouring money into the race in the hope of flipping the district. In some cases, such as the race in Pennsylvania between Connor Lamb and Republican Rick Saccone in Pennsylvania’s 18th Congressional District and last year’s Senate Special Election in Alabama which was won by Democrat Doug Jones, the Democrats managed to eke out a win. In most of these districts, though, the Republican ended up winning, albeit by a much smaller margin than expected. This race falls into the second category.

In the end, Balderson appears to have largely maintained the slim lead that he had on the morning after the election, which isn’t entirely surprising. Generally speaking, the count that occurs after a race has ended does not change the outcome of the election absent some egregious error in the initial count that doesn’t appear to have occurred in this case. Nonetheless, Republicans should not rest on their laurels with this outcome. The fact that Democrats have come this close to winning this seat is significant and potentially portends big headaches for the Republican Party in the fall. While the borders have changed over the years, this district has been represented by a Republican nearly continuously from 1939 through today, with the only exception to that rule being the period from 1981 to 1983 when the seat was held by Democrat Bob Shamansky. Shamansky was defeated in his first bid for re-election in 1982 by John Kasich, who held the seat from 1983 until he retired at the end of 2000, at which point he was succeeded by Pat Tiberi, who as I noted above retired earlier this year. Even taking into account the fact that this is a Special Election in the middle of August, the fact that a Democrat has done as well as O’Connor appears to have done here is something that Republicans across the country ought to be concerned about.