In the long months between now and the conventions, one recurring theme we’ll see in the press and the punditocracy is speculation of who Barack Obama and John McCain will chose as running mates. None of us have any idea, of course, other than that Dick Cheney is not on anybody’s list. But it’s still fun to speculate.

For Obama, the most prominent names I’ve seen, aside from Hillary Clinton of course, are former North Carolina Senator John Edwards (Motto: He did so well in 2004), Kansas governor Kathleen Sebelius (a white woman who’s much less annoying than Hillary), former NATO commander and Marine Commandant Jim Jones (my boss’ boss at the Atlantic Council), former NATO commander and 2004 also-ran Wesley Clark and, now, former Georgia Senator Sam Nunn. Former Reagan SECNAV and current Virginia Senator Jim Webb, widely touted by myself and others, seems to have fallen out of favor. Also, since Jim Johnson has been ousted, we’re pretty sure that Obama won’t pull a Dick Cheney and pick his selection committee chairman.

Clinton, Edwards, and Sebelius would be traditional choices made for standard political reasons. Jones, Clark, or Nunn would be an admission that national security is a huge issue and that Obama needs help there. Frankly, unless he puts Jeremiah Wright on the ticket, I’m not sure it much matters.

The conventional wisdom is probably right that McCain’s VP choice matters more than Obama’s simply because of McCain’s age. At 72, it’s hard to see him running for a second term and, let’s face it, he’s more likely than his 45-year-old opponent to die in office.

Frankly, I’m not particularly enthusiastic with any of the above options. Palin and Jindal are interesting choices but make no sense for a candidate betting the ranch on national security expertise. Huckabee is simply a non-starter, since he alienates pretty much everyone who isn’t a die hard Evangelical. Hutchinson and Crist are safe but boring. Lieberman is the boldest choice, simultaneously doubling down on the Iraq bet and appealing to moderates, but he also energizes a large part of the Democratic base and irritates McCain’s conservative critics on domestic issues.

Is there someone out there that can simultaneously 1) help McCain carry a swing state, 2) bolster his conservative credentials, 3) complement the “Ready on Day One” message?

*Technically, Lieberman’s no longer a Democrat in name but there’s no cute acronym for “Caucusing With the Democrats But Poking them in the Eye with a Sharp Stick Whenever Possible” — much less one which rhymes with RINO. 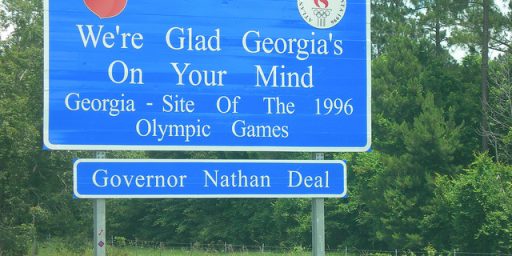 Good News For Democrats In The South?