The Kavanaugh Nomination Heads Toward Its Inevitable Outcome

The nomination of Judge Brett Kavanaugh is, effectively, assured. Democrats should be careful about how much further they push their opposition. 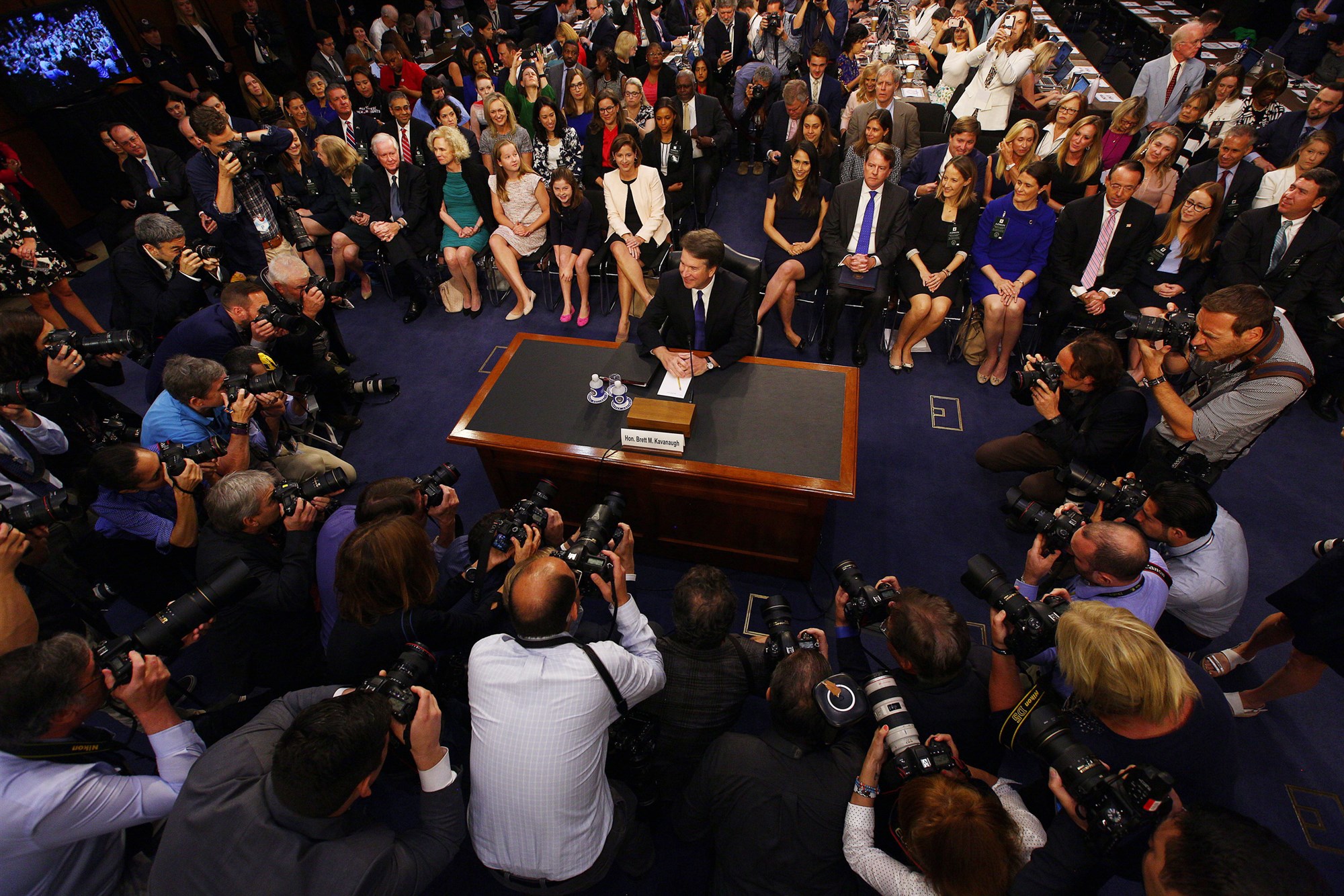 With the Brett Kavanaugh confirmation hearings over and the Senate Judiciary Committee is likely to vote on sending his nomination to the Senate floor as early as the end of this week, meaning that we’re likely to see a floor vote as early as the end of next week that would allow Kavanaugh to take the bench in his new court well in advance of the first day of the Court’s upcoming term. In the wake of those hearings, Robert Barnes and Seung Min Kim note that the hearings did little to alter the ultimate expected outcome of the nomination fight:

Supreme Court nominee Brett M. Kavanaugh walked a familiar tightrope last week at his confirmation hearing: professing an open mind to the liberal senators who will surely oppose him anyway, but giving no reason for the Republican majority to doubt he will be a stalwart on a more consistently conservative high court.

Senate Majority Leader Mitch McConnell (R-Ky.), on a path to make a transformation of the Supreme Court and federal judiciary the legacy of his tenure, flatly declared that the 53-year-old Kavanaugh would be in place when the justices begin their new term Oct. 1.

“Judge Kavanaugh’s judicial temperament and brilliance were on full display during this week’s hearings,” McConnell tweeted Friday. “He will make an excellent Supreme Court Justice.”

Democrats, who say the fight’s not over, aggressively questioned Kavanaugh’s honesty, reviving disputes over what they claim were misleading statements made when the former George W. Bush White House lawyer was confirmed to the U.S. Court of Appeals for the D.C. Circuit in 2006.

They criticized the Republican push to elevate Kavanaugh without a full rendering of his White House records. They claimed his nomination — more important than most because he would be replacing the pivotal member of the Supreme Court, Justice Anthony M. Kennedy — imperiled long-held precedents on abortion, gun control and curbs on presidential power.

But by the close of the four-day hearings, some Democrats on the Senate Judiciary Committee seemed resigned to Kavanaugh’s confirmation.

“I pray that I misjudged him and in fact he will, as a justice if confirmed, follow precedent more closely,” said Sen. Christopher A. Coons (D-Del.). “But obviously I’m gravely concerned about that, based on his long and established record.”

Those sorts of concerns are hardly unique to Kavanaugh.

Nominees of presidents from both parties, selected for their ideology as much as their legal brilliance, move toward the center for their first — and usually last — extended moment on the national stage.

In his buoyant but cautious star turn, Kavanaugh was no different. He picked his way through Supreme Court precedents, endorsing those he figured favorable to his chances and refusing to say whether a multitude of others were rightly or wrongly decided.

He avoided any criticism of the man who chose him, President Trump. He demurred even when asked if he agreed with Trump that there was wrong committed by both sides at the white-nationalist rally in Charlottesville.

He heeded his own advice, given as a young White House lawyer for a nominee facing confirmation for a lower court:

“She should not talk about her views on specific policy or legal issues,” he wrote in a 2003 memo that was released after Democratic senators protested it was being withheld by committee Republicans.

“She should say that she has a commitment to follow Supreme Court precedent, that she understands and appreciates the role of a circuit judge, that she will adhere to statutory text, that she has no ideological agenda.

As I’ve already noted, the outcome of Kavanaugh’s nomination fight seems fairly easy to predict. With a slim but apparently solid majority and the filibuster no longer an issue, Republicans are likely to stay united in voting to confirm Kavanaugh, which alone will be enough. The two most likely Republican defectors, Susan Collins of Maine and Lisa Murkowski of Alaska, have made it clear in the past that they would be reluctant to vote for a nominee who would be likely to vote to overrule Roe v. Wade. In response to questions about that case, Kavanaugh said repeatedly that he considered Roe and Planned Parenthood v. Casey, a 1992 case in which the Court largely reaffirmed the central holding in Roe, were “settled law” although he, properly declined to say how he might right in a hypothetical case challenging Roe and Casey directly. This is likely to be sufficient for both Collins and Murkowski to vote in favor of Kavanaugh on the floor. Additionally, Kentucky Senator Rand Paul had previously expressed some reservations regarding Kavanaugh’s views on Executive Branch power but ended up backing his nomination after meeting with him at the end of July. Finally, the Republican caucus is back at full strength with the appointment of Jon Kyl to fill the seat of the late John McCain. Prior to being appointed to McCain’s seat, Kyl was guiding Kavanaugh’s nomination through the Senate, so it seems obvious that he will be voting for Kavanaugh on the floor. This means that, even without any Democratic defections, Republicans will be able to confirm Kavanaugh easily.

On the Democratic side, the vast majority of the Democratic caucus is, of course going to vote against Kavanaugh’s confirmation. However, as I ‘ve noted before, there are a handful of Senators who are likely to be tempted to vote in favor of it due to the fact that they are running for re-election in very pro-Trump, pro-Republican states. These include Senators such as Joe Manchin, Joe Donnelly, Heidi Heitkamp, and Doug Jones, and writing today in The New York Times, Michael Tomasky advises Democrats not to push these Senators too far:

Next, activists’ attentions will turn to the Democrats who might end up voting to confirm Mr. Kavanaugh. These include most notably a handful of incumbents who are up for re-election in states Donald Trump carried: Joe Donnelly in Indiana, Heidi Heitkamp in North Dakota, Joe Manchin in West Virginia, Claire McCaskill in Missouri, Jon Tester in Montana and possibly Bill Nelson in Florida.

There are other red-state Democratic senators seeking re-election this fall — Sherrod Brown in Ohio and Debbie Stabenow in Michigan, for example. But for reasons peculiar to them, their races and their states, they’re generally considered to be able to cast safe “no” votes.

So liberal activists and groups are presumably going to spend time and precious money this month lobbying the above senators to vote no. I say to them: Don’t do it. It’s a waste of said time and money, for two reasons.

You have to look at the situations these people find themselves in, consider their re-election prospects — and consider the alternative. Take Mr. Manchin, whose circumstance is the one I know best.

He’s running for re-election in a state, my home state, where Mr. Trump is still enormously popular. Yet, Mr. Manchin is around eight points ahead of his Republican opponent, Patrick Morrisey, the state attorney general. Right now, Mr. Morrisey hasn’t yet quite found a theme on which to hammer Mr. Manchin.

But if Mr. Manchin were to cast a (numerically meaningless!) vote against Mr. Kavanaugh — presto. The rest of the race would be about that, and nothing but that. Millions of dark money dollars would pour in for TV ads blasting Mr. Manchin for going against the wishes of their president.

So what, you say? Good riddance to a conservative Democrat? You’d better go read up on Mr. Morrisey. He’s one of 18 attorneys general who have signed on to a lawsuit to gut the Affordable Care Act and eliminate coverage for people with pre-existing conditions. Mr. Manchin, and all the red-state Democrats mentioned above, have defended Obamacare stoutly.

It was lost by the Democratic Party, the Hillary Clinton campaign, and the courts-oriented grass roots and public-interest groups that didn’t do nearly enough to explain to the Democratic rank and file in 2016 that a Clinton victory would mean a liberal court majority for the first time in 30 years.

I kept waiting and waiting that fall for Ms. Clinton to emphasize this point, or for other prominent figures to say, “Look. You’re not wild about Hillary Clinton? Fine. Are you wild about Roe v. Wade, same-sex marriage, protections for immigrant children, campaign finance contribution limits? Then you’d damn well better vote.”

It never happened. So that’s on them. But honestly, regular voters should have been mature enough to have figured this out on their own. They’re to blame, too.

Tomasky is largely correct, of course. If the Republicans stay united, which seems likely, then the die cast and Kavanaugh will be confirmed. The question at that point for Democrats will be quite simple. Do they want to pressure candidates such as Manchin, Donnelly, and Heitkamp to toe the party line, thus taking the risk that they could lose their fights for re-election in November and thus scuttle any chance the Democrats have of taking control of the Senate in November? Or, do they want to do what they can to save these seats in the hope that they will pick up seats in states like Arizona, Tennessee, and Nevada and thus take narrow control of the Senate? Democrats can’t have it both ways so they would be advised to choose wisely.