The Romney Campaign Was Full Of Poll Denialists

If the Romney campaign looked shocked on Election Night, that's because they didn't believe the polls either. 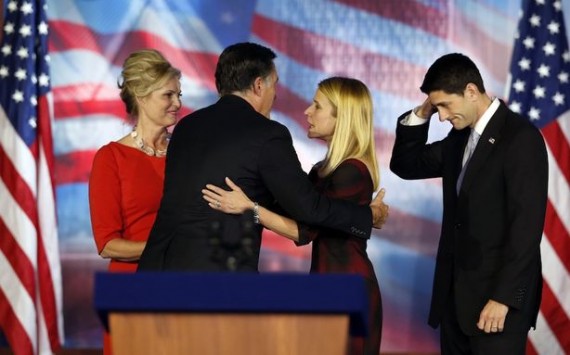 A Romney campaign post-mortem by CBS News’s Jan Crawford reveals that the Romney campaign, including the candidates and their wives, apparently all believed the skewed polls argument that we now know was completely untrue:

Romney and his campaign had gone into the evening confident they had a good path to victory, for emotional and intellectual reasons. The huge and enthusiastic crowds in swing state after swing state in recent weeks – not only for Romney but also for Paul Ryan – bolstered what they believed intellectually: that Obama would not get the kind of turnout he had in 2008.

They thought intensity and enthusiasm were on their side this time – poll after poll showed Republicans were more motivated to vote than Democrats – and that would translate into votes for Romney.

As a result, they believed the public/media polls were skewed – they thought those polls oversampled Democrats and didn’t reflect Republican enthusiasm. They based their own internal polls on turnout levels more favorable to Romney. That was a grave miscalculation, as they would see on election night.

Those assumptions drove their campaign strategy: their internal polling showed them leading in key states, so they decided to make a play for a broad victory: go to places like Pennsylvania while also playing it safe in the last two weeks.

Those assessments were wrong.

Quite obviously, the Romney campaign was operating off the same set of faulty assumptions that conservatives bloggers and pundits were using to criticize the polls for the past five months or so.

They assumed that the 2008 turnout model as an anomaly and that turnout this year would be closer to the turnout we saw in 2010. In retrospect, this seems like an amateur error if only because it’s been a rather well-known historical fact that turnout in midterm elections is far different from the turnout typically seen in Presidential elections. They also incorrectly assumed that the President’s base support in the minority community would not turnout in the levels that it did in 2008. Once again, the only evidence for this was the turnout model for 2010 when President Obama himself was not on the ballot. In fact, as Crawford notes in her article, in the crucial swing states of Ohio, Virginia, North Carolina, and Florida, African-American turnout was actually higher in 2012 than it had been in 2012 even though overall turnout for this year appears to have been down from the levels it reached four years ago.

They assumed that the fact that state-level polls showed Independents breaking heavily for Romney was evidence that the polls were somehow skewed. In fact, the evidence clearly showed that the number of self-identified Independents had been increasing over the past several years at the same time that the number of self-identified Republicans was decreasing, an obvious indication that the high level of support for Romney among Independents was actually coming from people who used to identify themselves as Republicans rather than true “Independents.” Therefore, it was fairly obvious that the state-level polls were in fact no over-sampling Democrats in a manner that made the President’s standing in the polls seem larger than it actually was.

Finally, the Romney campaign and its allies in the conservative punditocracy assumed that the remaining undecided voters would vote for Romney in the end. In reality, exit polling shows that the majority of people who made their mind up within days of the election ended up voting for the President.

In short, the entire Romney campaign, and its support structure among conservative pundits and bloggers was based on a set of faulty and obviously overly optimistic assumptions about what kind of electorate the candidate was facing in 2012. To a large degree, these assumption and the poll skepticism that they supported were part of the overall negative attitude that the right has about the media, which they mostly believe is biased against them. When you believe that, it’s rather easy to believe that the polls that the media reports on are also deliberately biased not matter who fundamentally absurd that argument is when you really think about it. Nonetheless, I can’t help but think about how similar the Romney campaign going into battle with faulty intelligence and assumption about the 2012 Electorate with the Bush Administration going into Iraq with fault assumptions and intelligence about how the war would proceed. In the end, both endeavors ended in disaster.