Third Democratic Debate Grabs 6.7 Million Viewers, The Lowest Yet For Any 2016 Debate

To nobody's surprise, the third Democratic Debate received the lowest ratings yet of any debate so far this election cycle. 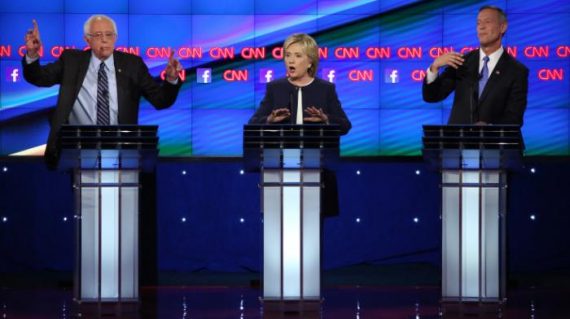 As expected, Saturday’s Third Democratic Debate grabbed the smallest viewership numbers of any debate so far this election cycle, but the numbers were still relatively higher than what we’ve seen in previous election cycles:

The Dems are still going unnoticed on Saturday nights.

This weekend’s Democratic debate had little trouble winning a television ratings battle against a lineup of other networks’ reruns. But, when it comes to competing against their GOP counterparts, the Democrats still haven’t come close to pulling in as many viewers as Donald Trump, et al.

A little more than 6.7 million people tuned in to ABC  on Saturday night to watch Democratic frontrunner Hillary Clinton debate a range of issues with Vermont Senator Bernie Sanders and former Maryland governor Martin O’Malley, according to Nielsen. That was more than enough to win the debate’s time-slot, with a rerun of CBS  hit drama NCIS coming in just behind the Dems with nearly 5.2 million viewers.

As I’ve said before, critics, pundits, and both of Hillary Clinton’s Democratic opponents have suggested that the debate schedule, both in the way it limits the number of debates and has scheduled most of them on weekends, seem to be part of a strategy to protect the presumptive front-runner for the nomination  by limiting the amount of free media time. Whether that is part of a strategy or just the way things have worked out, that seems to be exactly what has happened. The Democratic National Committee has rejected this criticism and argued that the fact that the debates have mostly ended up on weekends is due to the fact that they made the decision to air the debates on broadcast networks rather than cable, thus limiting the time slots that were potentially available since broadcast networks are generally unwilling to give away blocks of time on weeknights when regularly scheduled programming brings in higher viewership and higher advertising revenue. Even if that’s true, though, the numbers for the Republican debates, all of which have aired on cable networks that are generally part of most basic cable packages have been far better than either of the Democratic debates aired on broadcast networks where more viewers can, theoretically at least, access the programming. Additionally, the first Democratic debate was aired on CNN and it garnered more nearly twice as many viewers as the highest-rated of the two debates that followed it. That suggests that Democrats could have reached more viewers with the second and third debates if it had partnered with a cable network rather than a broadcast network. Given that, the idea that these debates were deliberately scheduled to limit the number of people who might see them begins to sound plausible, as does the idea that the Democratic National Committee has been putting its thumb on the scale for Hillary Clinton since the beginning of this process.