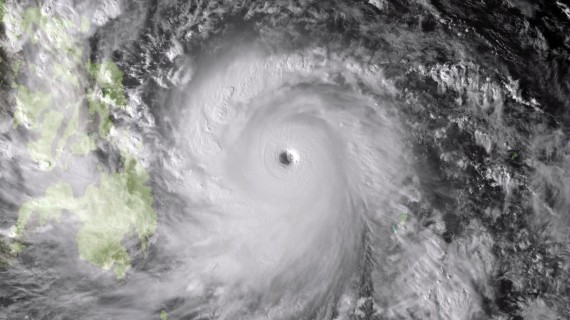 Death toll estimates in the wake of what may well have been the strongest storm to strike land in recorded history continue to mount:

MANILA — The powerful typhoon that swept across the Philippines on Friday, one of the strongest storms ever to make landfall, cut a path of destruction through several central islands, leaving the seaside city of Tacloban in ruins and leading to early, unconfirmed estimates of as many as 10,000 dead.

Wire reports quoted the city administrator of Tacloban suggesting that the death toll could reach 10,000 in his city alone. A police official gave an identical estimate, citing the governor of the area, who had spoken with officials in villages that had been hit, according to wire reports.

The government disaster agency said it could confirm only about 150 deaths so far from Typhoon Haiyan, although the president said he expected the number to rise significantly. The Red Cross in Manila said earlier on Saturday that its people on the ground were reporting an estimated 1,000 deaths on Leyte Island, where Tacloban is, and about 200 on the neighboring island of Samar.

“The local Red Cross chapter has seen many bodies,” Gwendolyn Pang, the secretary general of the Philippine Red Cross, said in a text message. “An actual body count has to be done to determine the exact number.”

The destruction, which has taken down phone service in many areas, made confirming any of the accounts difficult.

Some meteorologists said the storm, called Yolanda in the Philippines, hit land with sustained winds above 190 miles per hour, while others reported winds of 150 miles per hour. On Friday, some in the country thought the Philippines might have been spared high casualties because the storm had moved so quickly, but they did not know that it had caused a serious storm surge, at least in Tacloban.

Photos and television footage showed fierce winds ripping tin roofs off homes and sending waves crashing into wooden buildings that splintered under the force. Large ships were tossed on shore, and vehicles were shown piled up on top of one another. Video footage from Tacloban showed ocean water rushing through the streets of the city, which has an estimated population of 220,000.

Speaking to Reuters, the manager of the city’s airport, which is on a strip of land that juts into the sea, estimated that water there rose up to 13 feet. Reuters also quoted a spokesman for the national disaster agency saying many houses in Tacloban were destroyed.

A bicycle taxi driver who lives near the airport told The Associated Press that he and his family had taken refuge in a parked jeep, which was swept away in the roiling waters. The man, Sandy Torotoro, said that as the vehicle floated by, many people screamed for help as they were swept away, waving their hands above the water.

The Social Welfare and Development Department said that the storm affected 4.28 million people in about 270 towns and cities spread across 36 provinces in the central Philippines.

President Benigno S. Aquino III said at a news briefing on Saturday evening in Manila that he expected there to be “substantially more” deaths than the government had confirmed. He arrived Sunday in Tacloban, according to a member of Parliament.

The government has been flying in military cargo planes carrying food, clothing and shelters, but blocked roads have made distribution difficult.

“The last time I saw something of this scale was in the aftermath of the Indian Ocean tsunami,” Sebastian Rhodes Stampa, the head of the team, said in a statement, referring to the 2004 tsunami that devastated parts of Indonesia and other countries. “This is destruction on a massive scale. There are cars thrown like tumbleweed.”

One hopes that these initial estimates end up being far higher than what reality turns out to be, but things aren’t looking good.